AMD launched its Ryzen Threadripper PRO processors last July. It claimed these CPUs delivered the "world's highest performance" for a workstation CPU, as well as a long list of firsts, and a multitude of attractive qualities desired by professional users. However, the launch of the new Ryzen Threadripper PRO 3995WX, 3975WX, 3955WX, and 3945WX was aimed at OEMS and system integrators, so DIY enthusiasts were left out in the cold. AMD's launch partner was Lenovo and the news at the time suggested looking into purchasing a Lenovo ThinkStation P620 system in the autumn if you were interested in benefitting from the new Threadripper Pro CPUs.

A few hours ago AMD emailed HEXUS to announce that the Threadripper Pro CPUs have been untied from their OEM and system integrator shackles. Three of the four Threadripper PRO CPUs launched last July are now available worldwide from leading global etailers and retailers, we have been told. It is the three most powerful SKUs, the Ryzen Threadripper PRO 3995WX, 3975WX, 3955WX. AMD didn't see fit to release the lower-end 12C/24T 3945WX. To check the range of offerings, please refer to the specs/feature table below.

AMD wishes to highlight that the above processors offer "up to 64 cores, 8 channels of memory, and 128 PCIe Gen 4 lanes". Other features important to some professional users are the AMD PRO Security technologies, including AMD Secure Processor and AMD Memory Guard. 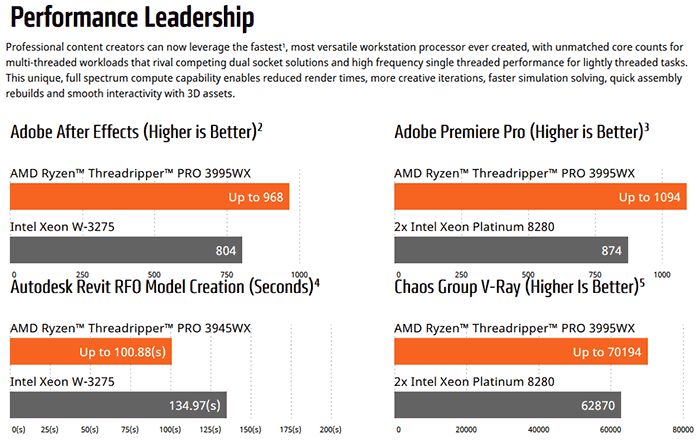 With a retail release come retail prices. AMD directed us to look at Scan's new 3XS systems that are now being made incorporating these CPUs. Following that link will also provide the UK pricing for the Threadripper PRO trio (scroll down the page to near bottom) as follows:

At the time of writing the two pricier CPUs are reported as being in stock but the 16C/32T 3955WX is pre-order only with a due date of 5th March.

If you are interested in the above you may also wish to take a look at an AMD WRX80 motherboard such as the Asus Threadripper PRO WS WRX80E-SAGE SE Wi-Fi, which is £889 at Scan (in stock).

We find out if the mainstream 11th Gen Core makes more sense to the enthusiast.

Posted by excalibur1814 - Wed 03 Mar 2021 12:29
Please be aware that Scan will charge a *re-stocking fee if, for WHATEVER reason, you return the board. Even if faulty (as they'll argue that it's not faulty).

kalniel
Correct, not allowed to charge restocking fees if you're buying as a consumer. If anyone does you can report them to trading standards.

Yeah for some reason business to business transactions don't have the same level of protection as a business to consumer purchase. I can understand protecting against ‘wrong choice’ as there might be some reselling going on but faulty stuff should be treated the same imo.
Posted by Iota - Wed 03 Mar 2021 17:18

excalibur1814
Please be aware that Scan will charge a *re-stocking fee if, for WHATEVER reason, you return the board. Even if faulty (as they'll argue that it's not faulty).

*Unless they've changed this practise.

No, they don't. I've had to return something to Scan before and I wasn't charged.