AMD has been rather slow to follow up on the initial volley of AMD Ryzen 5000 desktop processors in November last year. On one hand this is good, if it means it can catch up with supply side demands quicker by concentrating on fewer SKUs. On the other hand, we'd like to know what is in the pipeline, naturally. Moreover, some people might be waiting out for a particular successor – I've noticed quite a few people have a Ryzen 5 5600 on their wish lists (non-X version) for example.

With the above in mind, it is good to see that at least one giant OEM is starting to offer build to order desktop PCs with previously unreleased Ryzen 5000 CPUs. Perhaps the flood gates are going to open with this and more SKUs just ahead of the Intel Rocket Lake-S launch. 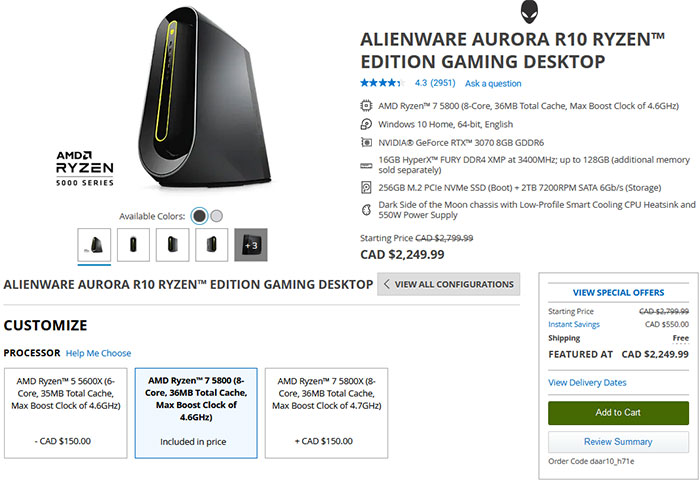 Ghost Motley on Twitter spotted that Dell has started to list systems with an AMD Ryzen 7 5800 option. The listing (screenshot above) seems to be in error in one way – why would Dell Alienware Canada be the exclusive launch partner for this chip? However, it can be quite certain this isn't a typo because as you can see in the screenshot the AMD Ryzen 7 5800 option is listed between the 5600X and 5800X processor options sitting comfortably with the other choices CAD$150 either side.

That's not all, the Alienware Aurora R10 Ryzen Edition Gaming Desktop confirms a little bit of spec with this processor choice. The AMD Ryzen 7 5800 option has the same 8-cores, 36MB of total cache as the 5800X but just a slight drop in boost speed of 4.6GHz (rather than 4.7GHz). Not a terrible sacrifice to save CAD$150. Remember though, that in our CES report on these processors, and the AMD listing, the base clock is just 3.4GHz (rather than 3.8GHz). These base clock reductions are a key factor in the non-X models achieving a 65W rather than 105W TDP. 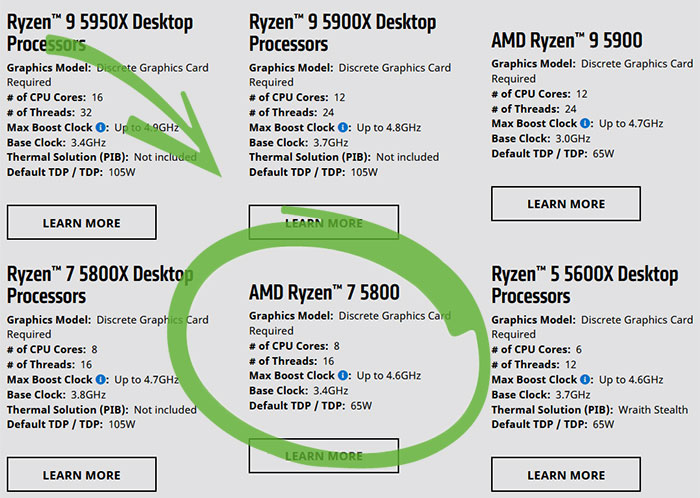 Back at CES 2021 AMD gave a passing mention to the Ryzen 9 5900 and Ryzen 7 5800 (non X versions) and mentioned at the time they were 65W processors. The AMD Ryzen 7 5800 and 5900 are not listed with 'PIB' details on the official product pages as they are destined to be OEM only unless you live in a region where such products can become available anyway. Now, at last, it seems like OEMs are starting to roll them out.

Because AMD can sell the Ryzen 7 5800X for more money?? Also they can have more relaxed binning requirements too.
Posted by trillo_del_diavolo - Mon 22 Feb 2021 14:43
Well, you don't really need a thousand SKUs with subtle differences in the same price bracket, they might not even have enough defective dies for that. Confusopolies are bad enough as they are.
Posted by DanceswithUnix - Mon 22 Feb 2021 14:51

So perhaps they figured they would fix the numbering here, rather than dragging the stupidity on. I mean, they go from 6 cores to 16 cores using 5 numbers and sometimes slap an X on the end, it doesn't sound hard.
Posted by Tunnah - Mon 22 Feb 2021 15:06

CAT-THE-FIFTH
Because AMD can sell the Ryzen 7 5800X for more money?? Also they can have more relaxed binning requirements too.

So perhaps they figured they would fix the numbering here, rather than dragging the stupidity on. I mean, they go from 6 cores to 16 cores using 5 numbers and sometimes slap an X on the end, it doesn't sound hard.