AMD has refreshed its line of Ryzen Embedded processors. These SoCs are targeted at Thin Client, MiniPC and Edge systems but sometimes crop up in various interesting x86 consumer gadgets like games consoles, handhelds and so on. The new family, dubbed the AMD Ryzen Embedded V2000 processors has four processors, which you will find discussed as a range and individually tabulated below.

The headlining change to the AMD Ryzen Embedded series is that they now offer double the cores (up to 8 cores) compared to Ryzen Embedded V1000 products plus "up to 2x the performance-per-watt and an estimated 15 percent IPC uplift over the previous generation". They are built using TSMC 7nm process technology and pair Zen 2 CPU cores with Radeon Vega Graphics GPU sporting either 6 or 7 CUs. 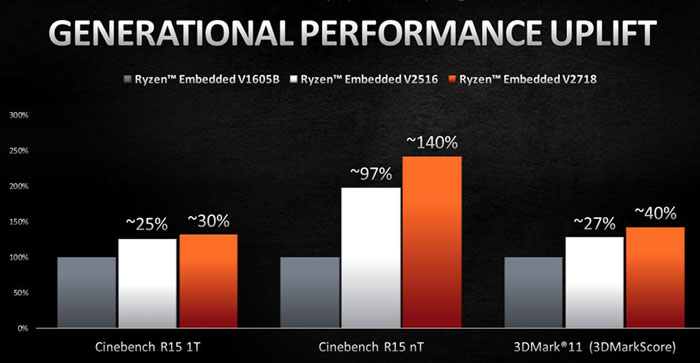 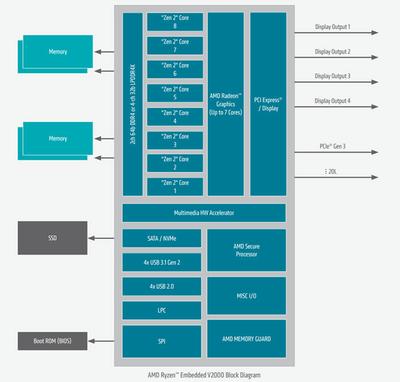 All the Ryzen Embedded V2000 models support up to four simultaneous 4K display connections, and 3,200MHz RAM. Other uplifts not shown in the main specs table include; the move to 7nm for the SoC, and the move to 20 PCIe Gen 3 lanes (from 16).

In addition to the CPU performance uplift provided by the move to Zen 2 architecture and doubling of core counts, AMD's new Ryzen Embedded V2000 Series are said to deliver up to a 40 per cent gain in GPU performance thanks to the improved Vega graphics units. All these improvements are delivered at the same advertisied TDPs as their predecessors.

Need a review vs Intel NUC.

Need a review vs Intel NUC.

Yes, CB did a news article on those:
https://www.computerbase.de/2020-11/asrock-ibox-v2000-luefterlos-mini-pc/
Versus the ASRock Deskmini A300 / X300 with it's AM4 socket, those BGA soldered ones are about half the size (1.9 litres vs 0.93 litres).
However, since Deskmini is DIY they are probably a lot cheaper.