Twitter-based processor peeker Tum Apisak has surfaced some intriguing AMD Ryzen 5000 Series CPU information from digging through the Geekbench v5 benchmark results database. Apisak has a number of new posts mined from Geekbench in recent hours but the most eyebrow raising link he has provided is of a Geekbench run from an 'iMac Pro' packing an AMD Eng Sample: 100-000000059-37_46/35_N which runs at over 6.0GHz. If you head on over to AMD's official Ryzen 9 5950X product page you will see that this processor has a matching OPN (100-000000059-etc). 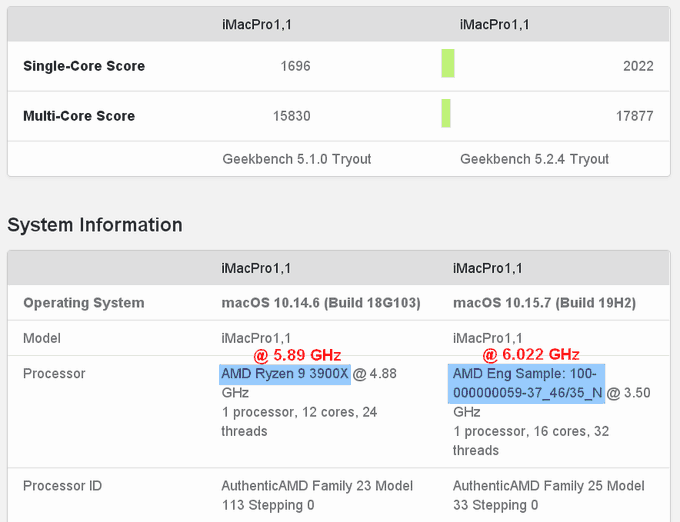 Above you can see Apisak's screen grab of the Geekbench results comparison (against the Ryzen 9 3900X, also in an 'iMac Pro' system). The headlining >6.0GHz figure comes from the associated .gb5 file raw JSON output data collected during the test run, as VideoCardz explains in its story about Apisak's findings. The .gb5 file data points to the AMD Ryzen 9 5950X oscillating between 5.922 and 6.02GHz boost speeds.

It is assumed that some high-end cooling solution was used to push the AMD Ryzen 9 5950X past the 6GHz milestone. VideoCardz says that AMD has been seeding extreme OC names with CPU samples and this could be one of the results that has surfaced by accident. Only after these CPUs are officially released will we have a proper handle on their OC ability with various forms of cooling (air, hybrid, liquid, and LN2 etc).

The above linked two column GB5 comparison table shows the new AMD Ryzen 9 5950X confidently outpaces a similarly overclocked AMD Ryzen 9 3900X in the tests single core tests but how does it compare against other modern CPUs? Twitter's Harukaze has put together a nice graph, integrating Apisak's results, which helps to put things into perspective and I have reproduced that below. 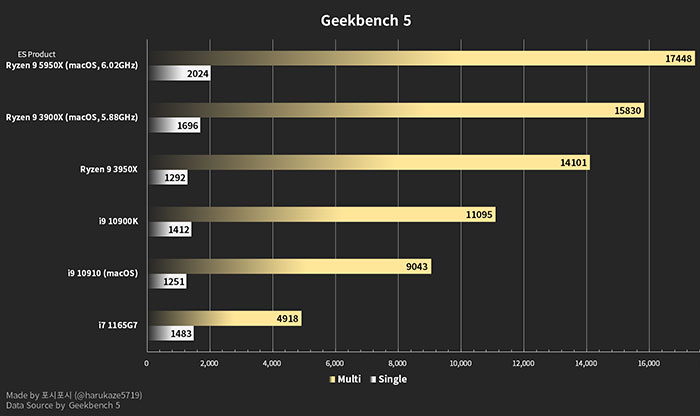 Remember, you will have to wait about three more weeks for official third party benchmarks and reviews of the first salvo of AMD Ryzen 5000 series CPUs featuring the Zen 3 architecture. If you are interested it might be worth having an eye on HWbot at that time, to see how far the OC experts are managing to push these CPUs.

[GSV
Trig;304]Do we think Apple will really shift from Intel?
IF they do that's another feather in AMD's cap, some of the stuff they are doing this year is really setting them up for a good 2021…

Maybe in the short term, but i think they've already pointed at moving towards having their own ARM based CPU's throughout the range and not just in their phones & iPad's etc. This was before Nvidia bought ARM though so who knows.
Posted by Jonj1611 - Fri 16 Oct 2020 13:46
I thought Apple were going back to making their own processors?
Posted by [GSV]Trig - Fri 16 Oct 2020 14:00

Skyflier
Maybe in the short term, but i think they've already pointed at moving towards having their own ARM based CPU's throughout the range and not just in their phones & iPad's etc. This was before Nvidia bought ARM though so who knows.

Even if it is short term, and they do end up actually making their own CPU's across the whole product lineup, the move from Intel to AMD speaks volumes.

Be more interesting long term to see how they play with NVidia if they do get ARM, if there's any sort of knock on effect with Apple supporting NVidia GPU's over AMD's..
Posted by Jonj1611 - Fri 16 Oct 2020 14:05
Is it not possible its nothing to do with Apple and someone running a Hackingtosh or is that not possible anymore?