During the Zen 3 special event last week we learned quite a lot about the new AMD Ryzen 5000 series of processors. The firm even shared a Cinebench R20 single-thread (1T) run and score for the Ryzen 9 5900X with the headline catching claim that it was the first desktop CPU to break 600 points. However, we will have to wait until 5th November for the hardware release, and review embargo lift, until we can tell you more about the Ryzen 9 5950X, AMD Ryzen 9 5900X, Ryzen 7 5800X, and AMD Ryzen 5 5600X - the initial salvo of the Ryzen 5000 series CPUs. 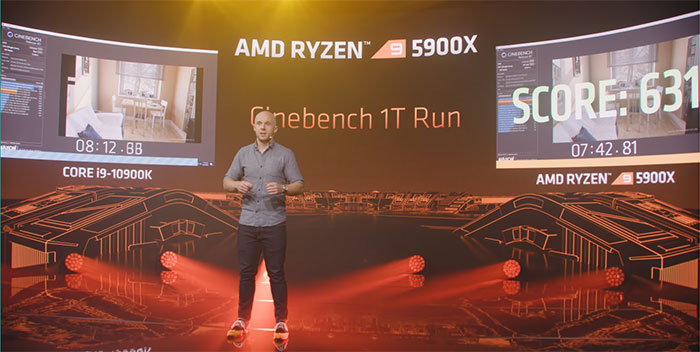 When you Google 'processor A vs processor B', one of the first hits is usually for the dedicated comparison ranking site CPU Monkey, rather than a deep dive tech site. Such sites provide a very quick way of comparing products that might not be normally put head to head - and you might look at the results if you are upgrading from a long-past generation. Interestingly Germany-based CPU Monkey has been updated to feature all four of the Ryzen 5000 chips which will be released first, on 5th Nov. Each CPU is detailed with all the tech specs which we know, but the details also include Cinebench R20 scores for both 1T and MT tests. 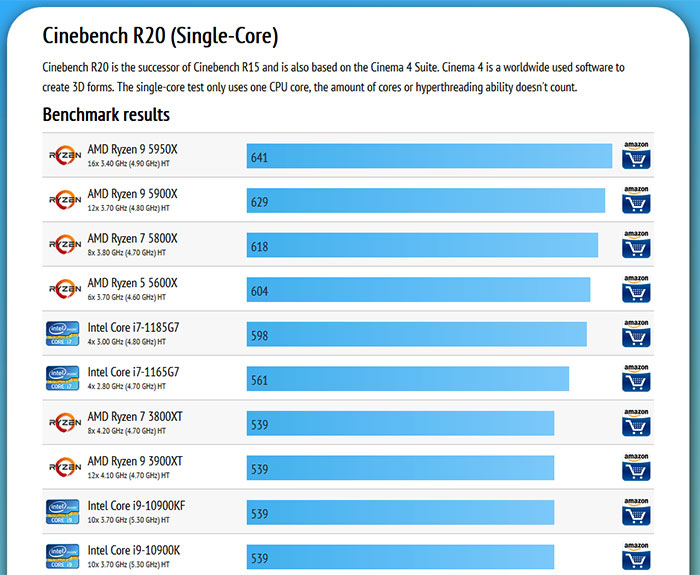 If you head on over to this CPU Monkey top list page for Cinebench R20 1T you will see that the new Zen 3 processors have claimed all four of the top positions in the chart. See screenshot above. You can see in my screenshot that all four upcoming AMD CPUs score above the 600 mark in Cinebench R20 1T tests. Intel's 10nm Tiger Lake CPUs are quite close behind, well at least the top end Core i7-1185G7 is. For further reference you can see the scores of the likes of the AMD Ryzen 7 3800XT, and Intel Core i9-10900K at the foot of this chart.

Looking at the purported Cinebench R20 multi-thread benchmark scores of the new AMD chips the results aren't so stunning. For a start they are harder to find, as they are not hogging the limelight here. That is understandable when there are 64C/128T parts to compete with. However, the AMD Ryzen 9 5950X with 16C/32T is the top-performing 16C parts with a score of 10,360, according to these early estimates. Scroll down further and you will find good results for the AMD Ryzen 9 5900X, Ryzen 7 5800X, and AMD Ryzen 5 5600X too. Remember though, these are not official or verified numbers and must be taken with a pinch of salt.

Stay tuned until 5th November for the third-party reviews of the first four AMD Ryzen 5000 series processors, including ours, to go live. In the meantime, there will be further excitement from AMD with the RDNA 2-focussed event just a fortnight away.

By my maths that's a 13% performance increase on multithreading with a slower clock speed, clearly there has been some base improvements with the core and the single threaded is being helped by the higher boost clocks…
Posted by jimbouk - Tue 13 Oct 2020 11:58
Enough to justify the price bump people are moaning about?
Posted by 3dcandy - Tue 13 Oct 2020 12:10

jimbouk
Enough to justify the price bump people are moaning about?

I actually believe so - throw in lower tdp and general power useage and still usually a cheaper motherboard and I think it's a better platform. Each to their own of course
Posted by [GSV]Trig - Tue 13 Oct 2020 13:00
Thats not a bad jump for me on my 1600AF, however I'm stuck on a B450M, so unless ASRock actually drop a BIOS for me next year then I'll be sticking with my 1600AF for now and just getting a GPU to replace the RX580-8Gb and see how much I'm actually held back by the CPU..