Over the weekend it has been noticed that Intel has started to supply additional Comet Lake-S series processors to the retail channel. Last week it emerged that systems maker DigitalStorm was marketing systems packing a new processors called the Intel Core i9-10850K. At the weekend it was noticed that this processor was also available in a boxed version, for DIYers, at various European retailers. Incidentally, but probably of much less interest to HEXUS readers, there are some new Celerons listed/available too.

The Intel Core i9-10850K doesn't appear in the Intel Ark database at the time of writing so we will have to refer to the various product pages that have surfaced in recent days for specs. Unfortunately that means some key specs are missing but we have most of the details, as collated below.

It remains to be seen whether the 100Mhz slower base clock and lack of TSV (compared to the Core i9-10900K) will have any impact on this processor's TDP. If not, the only thing it might have going for it is its price. 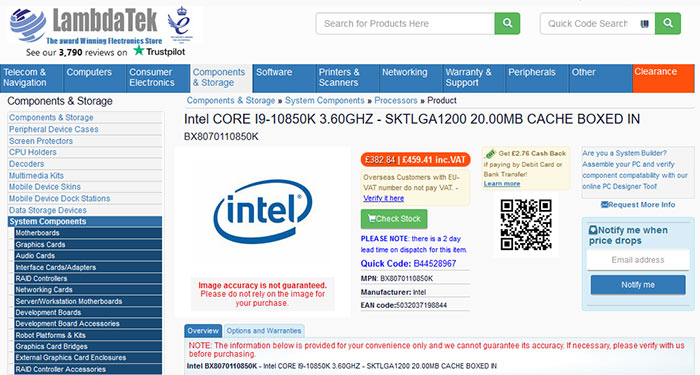 The listings spotted in the UK and mainland Europe suggest the Intel Core i9-10850K will cost £459 / €472 including local taxes, respectively. The same UK retailer sells the Core i9-10900K for £539 inc VAT - quite a bit more. Meanwhile, stateside, the DigitalStorm system configurator indicates that the price difference between the Core i9-10900K and 10850K is just $42. Hopefully the differences in chip configuration and pricing will be cleared up officially soon.

Last and least, Momomo_US, the Twitter source of much of this information, shared some listings for two new boxed Celeron processors. The Celeron G5905 (3.5GHz) and the G5925 (3.6GHz) are both 2C/2T parts with 4MB of L3 cache and 58W TDP ratings. UK prices for these entry level LGA1200 parts are seen to be £51 and £62, respectively.

Intel's product stack is absurd
Posted by half_empty_soul - Mon 20 Jul 2020 20:41
well if you considered buying i9 10900k that new CPU looks like a bargain till the moment you compare it to AMD :D