A slide which purportedly spills the beans on the impending Rocket Lake-S processors for enthusiast desktop PCs has been shared online. VideoCardz published the slide, or rather a snippet of a slide, which appears to reveal Intel's enthusiast desktop core configurations from Core i9, through i7 and i5 processors. Additionally, towards the bottom of the image, you can see that Core i3 and Pentium processors are due an update to the Comet Lake-S Refresh architecture. 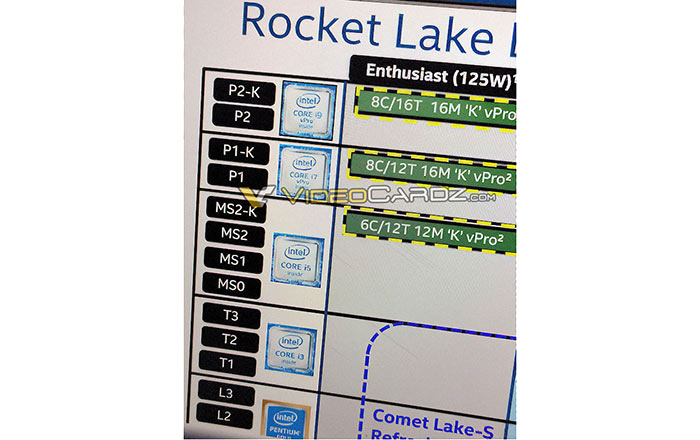 Perhaps the most interesting thing that pops off the page with regard to the enthusiast 125W Rocket Lake-S vPro parts on the way, is how the Core i7's cores/threads appear to be out of kilter. Unless this chart contains a glaring typo, Intel Rocket Lake Core i7 processors will have 8 physical cores but be capable of running 12 concurrent threads. We aren't used to chipmakers doing this, enabling hyperthreading / SMT on some of the processor cores but not others. One might assume, if correct, that it is just another way to differentiate the Core i7 and Core i9 ranges for Intel.

As a reminder about the features of the upcoming Intel Rocket Lake parts, please take time to peruse the slide leaked back in March, also by VideoCardz, reproduced below. As we commented at the time, other than the new processor core architecture, probably the greatest touted upgrade is the introduction of 20 lanes of PCIe 4.0 to enable faster GPU and storage component communications. Support for Xe graphics is another important step up for the desktop processors which are expected to come packing 14nm backported Willow Cove CPU cores. 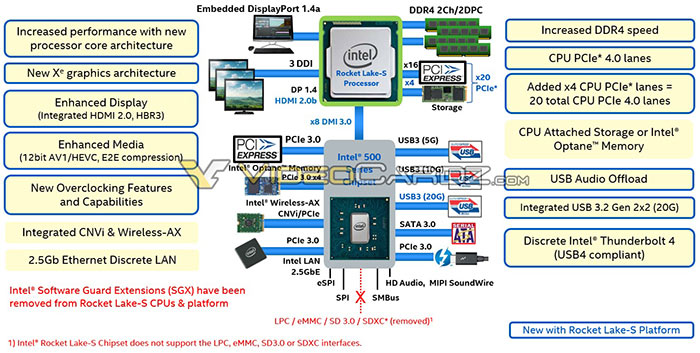 Shifting focus back to the leaked Intel slide du jour, and we can see a dotted rounded rectangle indicates that as the mainstream and performance consumer segments get the new RKL-S CPUs, those shopping for shiny new Core i3 and Pentium processors will be lured by Intel with its Comet Lake-S Refresh parts.

Posted by badass - Fri 10 Jul 2020 11:22
Typo. I'm confident on that one! it's 8 Core 16 thread. Typos in presentations by large companies are more common than many people might think.
Posted by sykobee - Fri 10 Jul 2020 11:28
I thought it was a typo yesterday but there seems to be a few other hints it actually isn't, and it's just segmentation by multithreaded/multitasking performance, whilst providing 4 full non-SMT cores for higher performance needs. I think Intel are going to use multi-tasking (not just multithreading) benchmarks heavily here, they must have found a niche where they perform well still.

Intel CPUs can now have SMT enabled/disabled on a per-core basis already, so this is just cementing that functionality in at the point of sale.

Personally I think it's confusing for the consumer, when you can just adjust base-clocks down a bit for the i7 versus the i9.

Alternatively, they have massive power consumption issues that are exacerbated by SMT, so they need to minimise that in the i7 to meet a TDP requirement.
Posted by DanceswithUnix - Fri 10 Jul 2020 13:11

sykobee
Intel CPUs can now have SMT enabled/disabled on a per-core basis already, so this is just cementing that functionality in at the point of sale.

But can the Windows scheduler deal with such a lack of symmetry?

DanceswithUnix
But can the Windows scheduler deal with such a lack of symmetry?

It's going to have to with the the big-little type CPUs on the way. There's already ‘preferred’ core type scheduling as well.