Intel made some big changes to the way its processors consume power with the introduction of the Comet Lake-S series CPUs. However, it wasn't until now that the under-the-bonnet changes have been made clear. In brief, PL1 is equivalent to the processor's advertised TDP listed in the Intel Ark (i.e. 1x), PL2 can vary up to 3.5x depending on processor model, and Tau (length of time PL2 can be sustained) is either 28s or 56s depending on processor model. 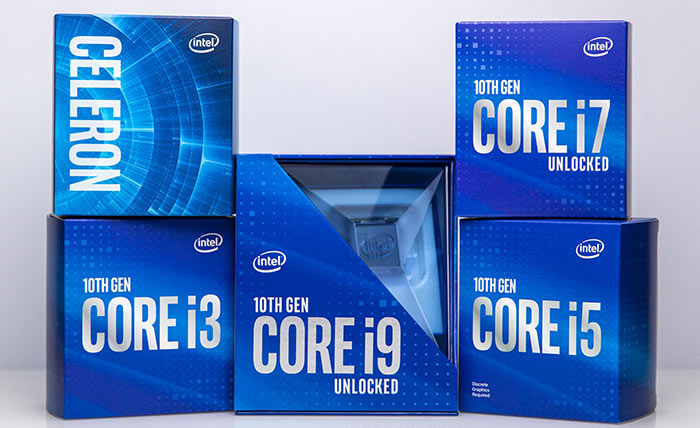 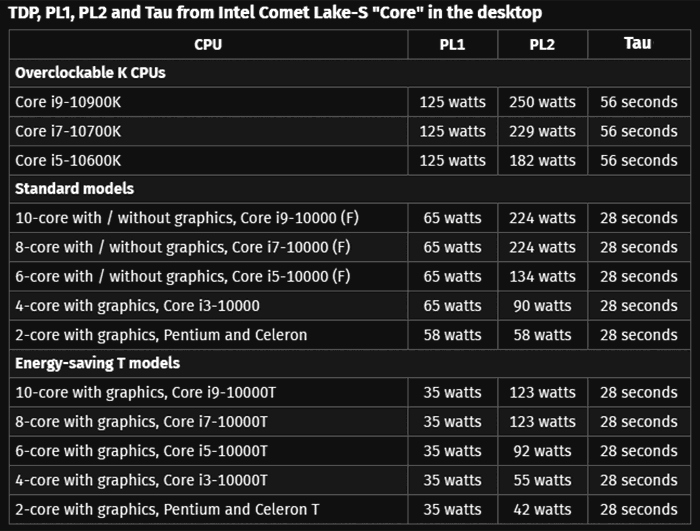 In previous generations PL2 never crept above PL1 by more than 25 per cent, or 1.25x, claims ComputerBase. In the chart above there are some extraordinary PL2 values specced by Intel engineers, given that previous baseline. The recently reviewed Intel Core i9-10900K and Core i5-10600K, for example, have a PL2 increased by a factor of 2x and nearly 1.5x, respectively. In the table provided you will also notice that Intel furnishes these K suffixed processors with a Tau of 56s. All other consumer desktop processors will only maintain PL2 for 28s at the most.

Moving down the chart we see some of the biggest PL2 increase factors. For example the standard Core i9 and Core i7 Comet Lake-S CPUs with 65W PL1, have PL2 values of 224W. Moreover, traditionally power-sipping, efficient 'T' suffixed processors with a standard 35W TDP might consume up to 123W in bursts of nearly half a minute in length. 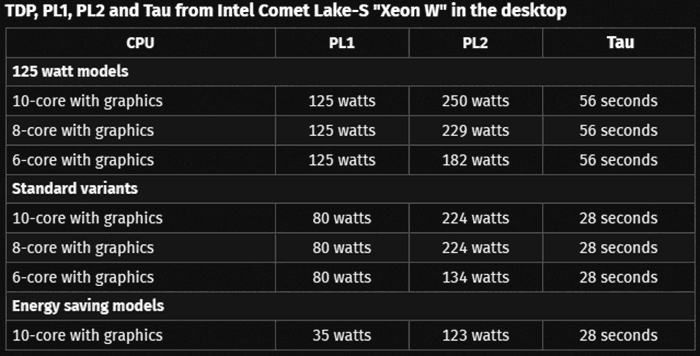 ComputerBase shares a similar chart for the Intel Comet Lake-S Xeon W chips (reproduced above). These workstation processors also sport PL2 values of up to 3.5x of the advertised TDP.

DevDrake
holly! that's explains some power consumption spikes in benchmarks.
Wonder if there is something similar for Ryzen.

I saw that and chuckled. I thought Tau could be defined by the mobo and that enthusiast models set Tau to 999 or something to allow boost for as long as she can stand?
Posted by DavidC1 - Mon 08 Jun 2020 18:14

DevDrake
holly! that's explains some power consumption spikes in benchmarks.
Wonder if there is something similar for Ryzen.

In desktops you can use water cooling or heatsinks that weigh much as an ultrabook so CPU and mobo makers go overboard on power settings.

The PL2 being 1.25x is a guideline but laptops already exceed this. Some Cometlake and Icelake models are set at 50W PL2. Of course unlike in desktops it can't be sustained for more than 30 seconds.