Arm held a Tech Day virtual conference a couple of weeks' ago to discuss a number of big announcements that will shape mobile experiences in 2021. First of all, it has launched the premium Cortex-A78. It hopes that this new processor will "transform the next generation user experience," thanks to its 20 per cent-plus performance increases in the same thermal envelope as the previous gen. 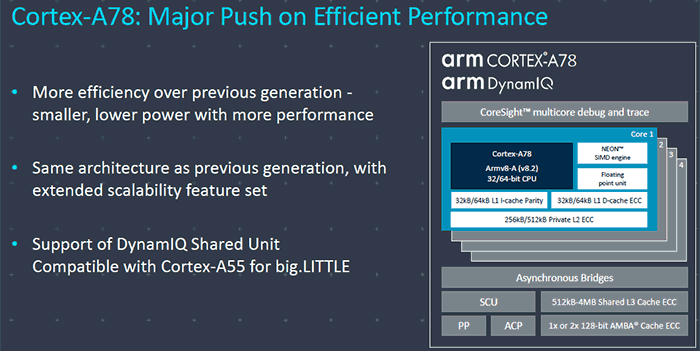 Arm's previous-gen Cortex-A77 design is an established staple of high-end flagship smartphones, featuring in the likes of the Qualcomm Snapdragon 865, MediaTek Dimensity 1000 5G SoC, and Samsung Exynos 980 5G processors. These you will find throbbing inside handsets like the Samsung S20, Motorola Edge+, OnePlus 8, and many more.

You won't be surprised to learn that the Cortex-A78 design builds upon the successful A67 and A77 designs. Since the previous gen, you have decent performance increases alongside, Arm claims, a smaller and lower power consumption CPU core, too. Device designers can choose how to make best use of the Cortex-A78, choosing greater performance (up to 20 per cent), greater energy-efficiency (up to 50 per cent savings at same perf), or a balance somewhere in between.

Arm claims to have "optimized all aspects of the microarchitecture for best efficiency," however it is built on the same base architecture with an extended scalability feature-set. Other architectural tweaks include; front-end improvements in branch prediction and cache, out-of-order core improvements to efficiency, and back-end improvements - especially with a view to bandwidth. The move from 7nm to 5nm will have brought some perf/efficiency benefits, too, surely.

Last year the launch of the Cortex-A77 CPU was trumpeted as offering up to 35 per cent more performance over the previous generation, so the bar is being raised without sacrificing power.

An increasingly-important component of our smart devices is the iGPU. The new Mali-G78 has even bolder claims of advances - that it offers 25 per cent better performance over its predecessor. Again, extra performance hasn't meant a raid on energy usage, and the new part is 10 per cent more energy efficient. Its ML (machine learning) performance has been given a 15 per cent uplift, as well.

To provide you with "better, longer mobile entertainment," the following key changes have been implemented to this Valhall architecture GPU: support for up to 24 graphics cores, asynchronous top-level operation and scalability, and built-in Fused Multiply-Add (FMA) ops. Most interesting is how Arm can run the core at different speeds, depending upon where the bottlenecks may be, as any processor is only as fast as its slowest-running component. Not only that, but running at different speeds alongside lower voltages can bring energy efficiency into even greater prominence.

The upshot of the tweaks and improvements present in the Mali-G78 are that your complex games running on this GPU will be able to be more life-like than ever, with faster rendering of smoke, grass, trees, and other geometry rich content. Mobiles will inch ever closer to the 'PC and console-like gaming' experience thanks to the G78, reckons Arm.

Posted by Luke7 - Tue 26 May 2020 15:28
Is "most efficient cpu ever" really a relevant marketing ploy? Like, unless they've intentionally made their technology worse since the last CPU, isn't it rather bleeding obvious that the new one is better and therefore the best one yet?
Posted by watercooled - Wed 27 May 2020 18:17
I see where you're coming from but to be pedantic, it depends. Efficiency is usually a priority for mobile-focused cores but sometimes a new CPU core design might trade efficiency for outright performance.