A refreshed AMD Ryzen 3 1200 processor has started to show up at retailers in Europe. On the surface, all the specs looks the same - 4C/4T, base/boost of 3.1/3.4GHz, 2MN L2 cache, 8MB L3 cache, and a TDP of 65W. However, the refreshed processor uses the 12nm Zen+ architecture, rather than the original 14nm Zen design. With all else being equal, we should expect to see the new processor simply offer the benefits of the newer architecture and process; improved IPC, improved power consumption, faster cache and RAM support, and an update to Precision Boost 2. You can read more about the move from 14nm Summit Ridge to 12nm Pinnacle Ridge transition in the HEXUS review of the AMD Ryzen 7 2700X and Ryzen 5 2600X from two years ago.

The new processor has been Christened the AMD Ryzen 3 1200 AF by some of the tech press. This is because the way that tech shoppers can see that they are getting the new Zen+ infused processor is via a small difference in the OPNB product identifier, which is YD1200BBAFBOX instead of YD1200BBAEBOX (my emboldening). Boxed versions come with the AMD Wraith Stealth cooler as standard. 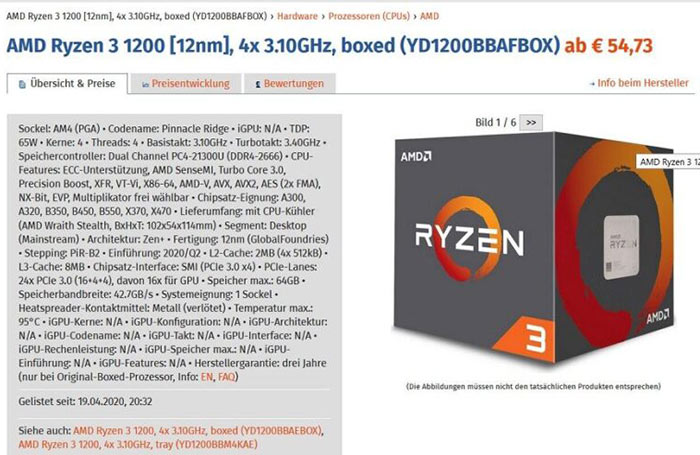 Yes, you could call them the F and E variants of the AMD Ryzen 3 1200 but the 'AF' moniker has already been established in techland by the introduction and acclaim for the AMD Ryzen 5 1600 AF version over New Year 2019/2020. TechTuber site like Hardware Unboxed, GamersNexus, and RandonGaminginHD have spent quite some time pondering over this sub-£100 6C/12T processor that is basically a slightly lower clocked AMD Ryzen 5 2600.

Going back to the story in hand, the 4C/4T AMD Ryzen 3 1200 with 12nm Zen+ cores is a quiet launch and expected to sell for the same as its close relative with 14nm Zen cores, you just have to watch out for that product identifier AFBOX rather than AEBOX code suffix. If it costs €55 in Germany with its similar VAT rates we can expect it to be about £50 here in the UK, when supplies arrive.

Lastly, if you were pondering over purchasing this new budget CPU, it is worthwhile checking your motherboard is Pinnacle Ridge ready.

1 Intel announces node renaming and roadmap to the Angstrom era

Domestic_Ginger
Rumours are circulating of a 3100 part 4c/8t for £100 or so. Zen2 so should be bit better but for the price it should be a great price although £85 for the 1600af means its a tough decision.