AMD's Financial Analyst Day typically offers greater insight into the company's near-term strategy for CPUs, GPUs and architecture. Yesterday's event was no different, and key company executives shared more information for each segment and how it plays into the server, desktop and mobile spaces. Taking GPUs first. 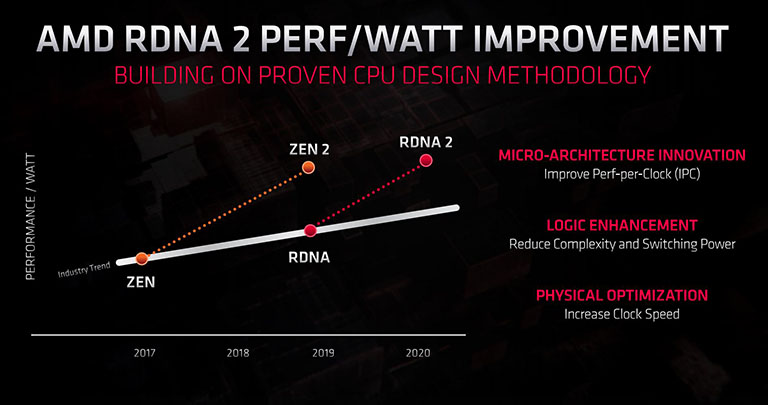 Though their existence is already known from various Microsoft Xbox Series X announcements trickling out recently, AMD is firmly introducing enthusiast-class RDNA2-powered GPUs later this year that promise a 50 percent performance-per-watt improvement over the incumbent RDNA architecture found in, for example, the Radeon RX 5700/5600/5500-series of GPUs.

As this information was contained within Financial Day presentations, AMD didn't go into any great detail on how the whole 50 percent improvement will be realised, which constitutes the same leap as from GCN to first-generation RDNA, though certain architecture attributes are now confirmed.

In concert with the custom Xbox Series X GPU, discrete RDNA2 boards will encompass hardware-based raytracing, variable-rate shading and a plethora of other features aimed at boosting performance and efficiency. Known colloquially to enthusiasts as 'Big Navi', AMD's referring to this upcoming performance GPU as Navi 2X, highlighting that it's more than just a scaled-up version of present hardware. Looking further out, there's an RDNA3 architecture in the works, too. 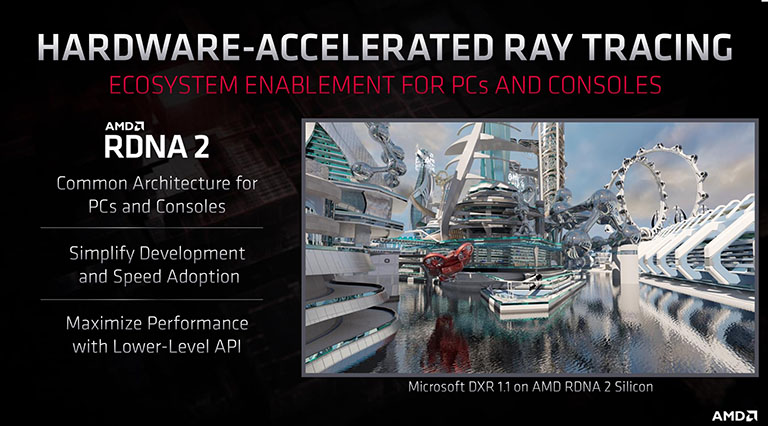 Key to enhancing opportunities for success in the GPU datacentre environment, AMD announced the Compute DNA Architecture (CDNA), built to accelerate compute workloads such as machine learning and artificial intelligence (AI). This upcoming CDNA/RDNA fork is interesting as it shows that one overarching GPU design cannot, in AMD's opinion, adequately serve the disparate needs of datacenter and consumer GPU markets where workloads are often different. Both will exist in their sphere of influence. 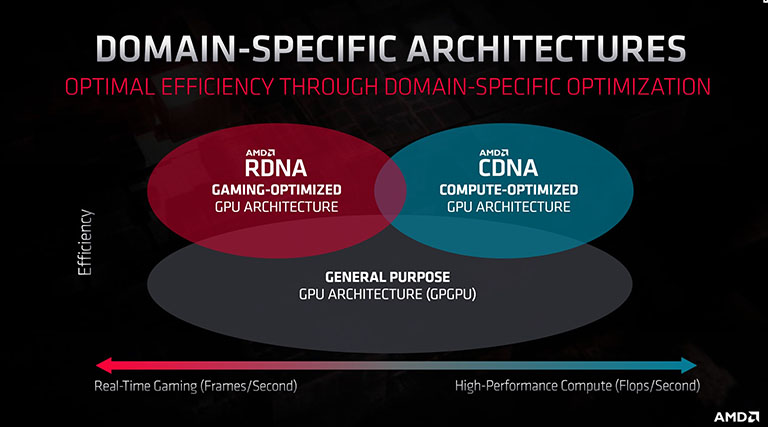 The first CDNA-infused professional cards will also launch this year and carry the 2nd Generation Infinity Architecture for faster, lower-latency connectivity inside and between GPUs. There's no word on models or implementation at this point.

Building on the success of first- and second-generation Epyc processors, AMD confirmed plans to introduce the third-generation Zen 3 blueprint into market later this year. Seemed destined for server first, AMD expects a complete rollout of Zen 3-based products by the end of 2021. 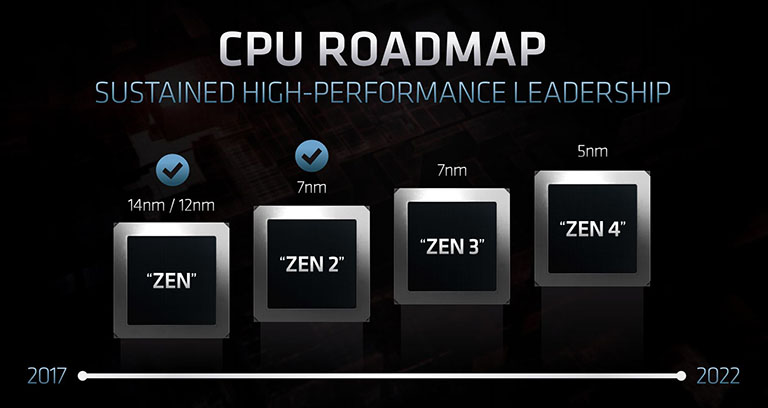 Next-generation Zen 4, to be built on a 5nm process, is currently 'in design'. Though no time frame or high-level details were shared, the exascale El Capitan supercomputer, due for operation in 2023, will use Zen 4-based CPUs and, one can now presume, CDNA-powered Radeon Instinct GPUs.

There's less visibility on AMD's plans for its forthcoming desktop and mobile Ryzen CPUs. This is deliberate, according to company spokespeople, as it wants to play cards closer to its chest due to, one can assume, the higgledy-piggledy nature of rival Intel's recent releases and execution timetable.

That makes sense, as it's becoming more difficult to know exactly which architecture and process Intel is likely to be on in, say, 2022. Conjecturing somewhat through roadmap exposition, AMD will likely lead with datacenter-optimised Zen 4 designs and then, a little while later, release the consumer Ryzen versions. Time will tell.

AMD has developed various bits of architecture to build out its CPUs and GPUs. The prime example is the Infinity Architecture. To that end, the company announced the 2nd and 3rd Generation Infinity Architectures, offering greater connectivity - up to 8-way GPU with coherency for 3rd Gen - ostensibly for compute-centric tasks such as machine learning. It is plausible that, just like the RDNA/CDNA fork, upcoming Infinity Architectures will take different forms depending upon product and segment. 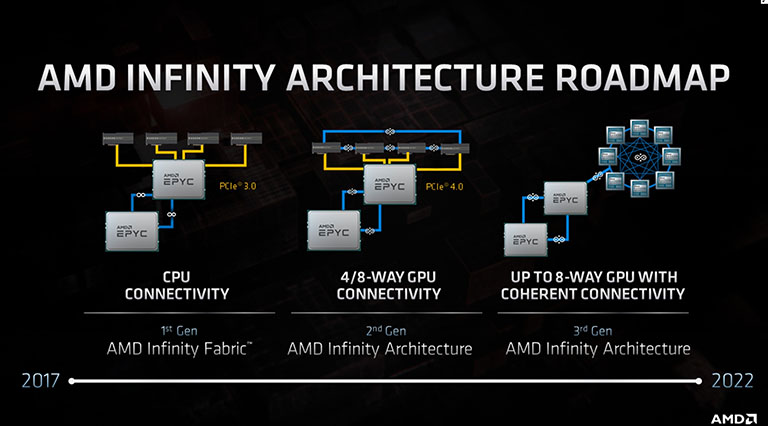 AMD's roadmap speaks further to building out products using a modular chiplet approach, with CPUs and GPUs working ever-more closely together through high-bandwidth, low-latency connectivity. Extending this farther, the company announced packaging technology known as X3D, which fuses chiplet architecture along with 3D stacking for, it is claimed, more than 10x the bandwidth density. AMD's answer to Intel's Foveros, if you will.

The prime purpose of these evolving technologies is to build disruptive products that address a growing total addressable market (TAM) valued at $79bn, of which $35bn pertains to datacentre, $32bn to PCs, and $12bn to gaming. AMD has therefore provided more colour on how it's looking to maximise on that TAM, through class-leading technology and consistent execution, so the next few years ought to be fruitful if, and it's a big if, AMD can continue hitting both straps in a timely fashion.

rave_alan
Amd has sold product that even not exist. There marketing team is awesome)

Thats because business and consumers are confident that AMD will deliver first class products as they have proved in the past few years and gained everyone's trust back, and im one of those who switched to Ryzen 3700x from intel.
Posted by Gentle Viking - Fri 06 Mar 2020 13:56
No the 5700 XT i don't think are due for replacement, but maybe a upgrade maybe stuff like ray tracing slapped onto it.
But if you are going to play on 1440p or smaller it make no sense to upgrade at least not to the new high end cards.
But of course if you plan to get a 4K screen too, then you also need big navi to power it if you want to stick with a all AMD build.

I am on 5700 XT and 1080p screen myself, and granted the new products will probably make me want them too, but thankfully my hardware will make sure i don't have to give in to those urges.
CUZ a 5700 XT with RT slapped on, and maybe a few more FPS, well that's nice but not something i am going to spend money on, not even if i was still a hardcore gamer.

cheesemp
Good to know what's coming up. I had my eye on a new PC with Ryzen 3600 and 5700 XT but it sounds like the 5700 XT is due for replacement around the end of the year and the upgrade is worth waiting for (I have an rx480 so not struggling yet anyway). It doesn't sound like the Ryzen 4600 is due soon however so a 3600 still sounds like a good upgrade for this year (And my 3570k is getting harder to live with).