An upcoming Intel consumer desktop CPU flagship has been spotted in the 3DMark online database, a listing which appears to confirm a smattering of key specs for the processor. Twitterer RoGame unearthed and screen-grabbed the listing, as reproduced below. 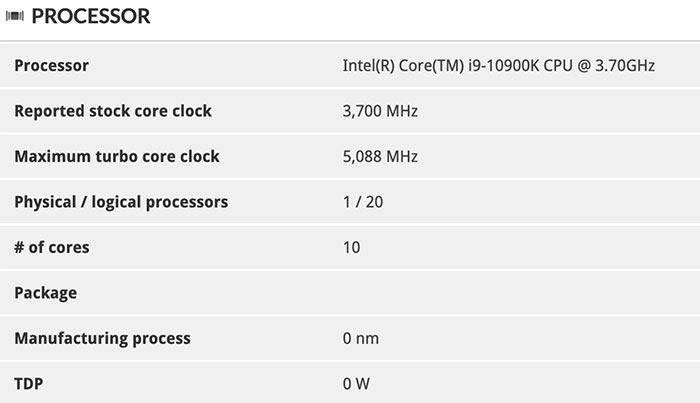 The above new Comet Lake chip may well be the last top-end consumer desktop effort from Intel using the 14nm process node. As Intel presses ahead with clock speeds, using its ageing architecture, there are concerns that the Core i9-10900K might run quite hot without a suitably beefy cooler. With a high-end cooler the upcoming flagship CPU may utilise Intel Turbo Boost Max Technology 3.0 and Thermal Velocity Boost to go even faster, up to 5.3GHz according to previous rumours. We don't have any info about the chip's proposed TDP.

On the topic of cooling, the existing stock of LGA 115x socket compatible coolers should be able to be transferred over to work on the new Comet Lake desktop CPUs. Of course you will have to check if the new cooler is up to the job when official details of Comet Lake desktop CPUs become available. However, one thing is certain; the Intel Core i9-10900K will require a new motherboard with Socket LGA1200. Suitable Z490 motherboards are expected to launch in May 2020.

globalwarning
So… It's like a 9900KS, possibly slower with hardware mitigation, that requires a new motherboard… got it.

Well it does have two extra cores/four extra threads too.