As recently reported, alongside its latest financials, AMD's Epyc (and Ryzen) processors are particularly strong revenue generators for AMD and it looks like this will continue. This looked like a dead cert for AMD back in August when it launched its new AMD Epyc 2 (Rome) processors with great industry support from the outset. Two of the biggest new names to get on board the AMD Epyc train at the Rome launch were Google and Twitter. Now it looks like another very big name in tech is about to purchase a ticket. 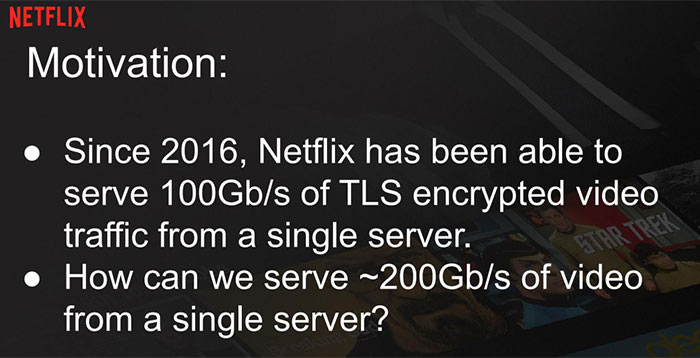 Slides from a Netflix presentation have emerged which show the video streaming giant is assessing AMD Epyc servers for its video serving hardware to deliver up to 200Gbps speeds per single server. The competition for the planned upgrade also effectively pits AMD single socket servers against dual-socket solutions from Intel. 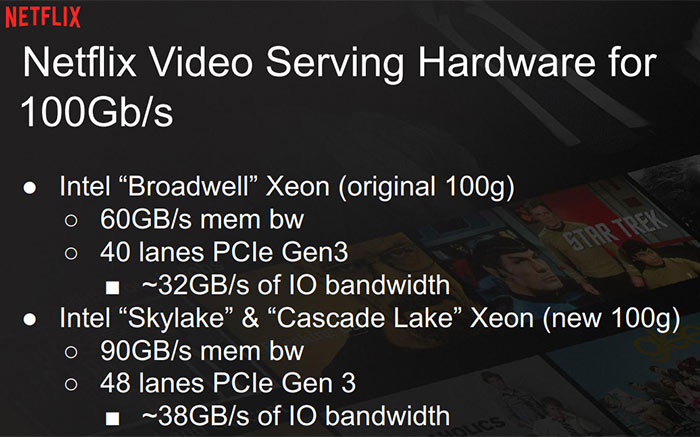 Phoronix reports that Senior Software Engineer at Netflix, Andrew Gallatin, presented the slides, reproduced here, at recent EuroBSDcon 2019 conference in Norway. Gallatin was highlighting the company's network stack optimizations to FreeBSD, which can currently hit 190Gbps+. The slides show that Netflix's NUMA optimizations to FreeBSD resulted in their Intel Xeon servers going from 105Gbps to 191Gbps while the NUMA fabric utilization dropped from 40 to 13 per cent. 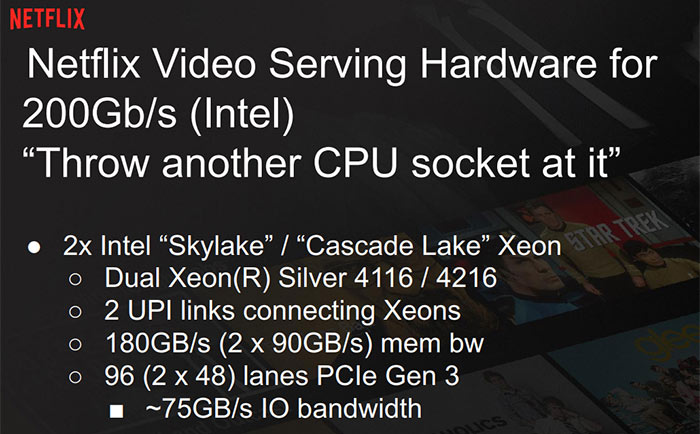 Meanwhile, the AMD Epyc server performance rose from 68Gbps to 194Gbps thanks to the tweaks. From a lower base, now the rivals are much closer in performance, and interestingly AMD edges slightly ahead. 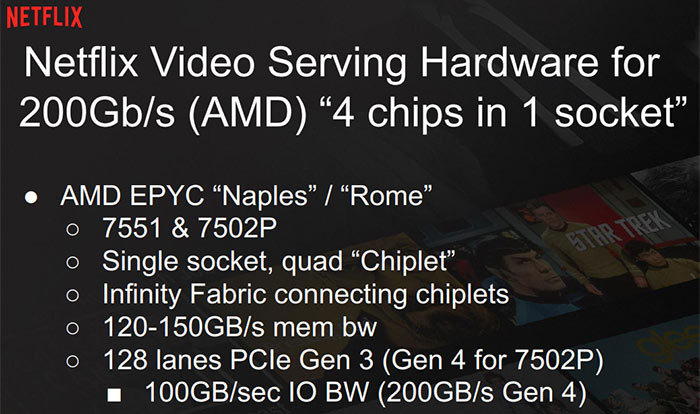 Importantly, Phoronix highlights that "not only is EPYC faster, but thanks to the 128 PCIe lanes per socket they are able to get by in one socket what they are using two Intel Xeon CPUs for otherwise." However, one area that the Netflix software engineer was a little wary of, with regard to AMD, was the lack of tools for monitoring Infinity Fabric saturation.

While it isn't in the bag by any means, pondering over the presentation and slide deck (PDF) indicates that Netflix could be the next big name to move over from Intel to AMD servers.

Posted by Gentle Viking - Wed 06 Nov 2019 12:33
As long as Netflix keep those data centers out of Denmark i am happy, several others are building here and IMO it is a waste of our green and black power.

Gentle Viking;1338941
As long as Netflix keep those data centers out of Denmark i am happy, several others are building here and IMO it is a waste of our green and black power.

Netflix got nothing i want.

Wouldn't it be more ecologically friendly to situate a data centre in a place with lots of green power rather than where power is mostly generated by fossil fuels? I don't get your reasoning.
Posted by Gentle Viking - Wed 06 Nov 2019 16:03
black power = coal power.

When current data centers open they will be using much of the Danish green power, so we are pretty much back to square 1 in regard to the country as a whole.
Some say they will be using green power from Norway, I guess the 700 MW Skagerak 4 cable between Denmark and Norway will glow red hot.
And these are all tax evading tech giants, so i am sure it will be a loose - loose case for Denmark.
Posted by Millennium - Thu 07 Nov 2019 07:58
Power is power, whether green energy or from coal. Unless you go super regulative you can't *stop* people making data centers and drinking all your power in your country. You just charge everyone a little more and invest more in green energy.

The days of coal and oil are slowly coming to an end. God knows what this will mean with the current prevalence of the petrodollar phenomena.