Intel has launched its new 10th Gen X-Series processors for enthusiasts and creators. These chips were originally due in October but have been pushed back to November - going head-to-head with AMD's launch of its newest Threadripper chips for the same audience. As yet we don't have anything in the way of Threadripper specs and pricing but Intel has shared details and pricing of four of its 10th Gen X-Series processors. 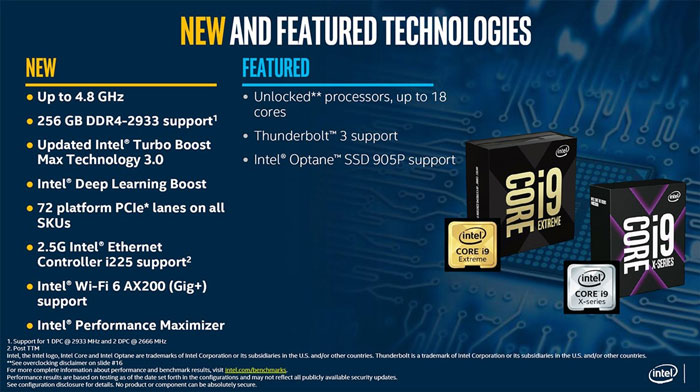 If it hasn't already struck you, the pricing for these enthusiast and creator parts is quite a lot lower than their predecessors. Tom's Hardware notes that the 9th Gen X-Series had an average price-per-core of $103, but "this will be reduced to ~$57 per core for 10th-gen Cascade Lake-X".

Performance and true value will only be known when third parties like HEXUS labs have managed to review and compare the latest generation HEDT chips from Intel and AMD next month. Having said that, Intel provides some indicators: for example it claims that the new X-series cores are 7 per cent faster than the Skylake-X generation in 3D rendering (14 per cent faster than a 3-year-old PC), and are twice as fast as the previous generation in inferencing. 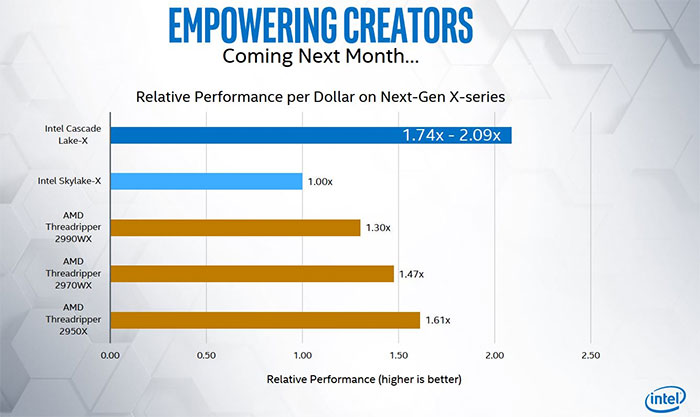 The new Intel Cascade Lake-X HEDT processors are expected to run on the existing stock of X299 boards but there will be some new X299X boards launched in November too.

It's a turnaround for Intel because they have crippled the sales of their previous lines for sale and resale but you can have a previous gen chip at half the price now!

azrael-
Do they support ECC*? ThreadRipper does.
*Of course they don't. Why would Intel give for free what Intel can make extra money on.

I haven't seen anything on ECC support yet but STH said it supports up to 256GB of unbuffered memory, is this ECC Unbuffered or standard memory unbuffered, there is no clarification.
Posted by afiretruck - Wed 02 Oct 2019 14:00
Good. These prices will help to keep AMD honest in their leading position (and hopefully their Threadripper prices sensible).