An interesting set of modern CPU comparison benchmarks have surfaced on the Chinese Baidu social media platform. The link doesn't show anything for me but it was live for WCCFTech this weekend. A series of single thread benchmark runs in the popular CPU-Z system info tool was shared. Remarkably, the lineup includes not just a pair of Intel Sunny Cove microarchitecture engineering samples but a trio of AMD Ryzen 3000 Matisse processors. Please prepare your salt shaker…

Providing some background to the Intel engineering sample 'ES' results, back at Computex Intel introduced its 10nm Ice Lake mobile processors, based upon the Sunny Lake CPU cores (and Gen 11 graphics). In Taipei Intel explained that the new microarchitecture is deeper, wider and smarter - and is tailored for low latency and burst workloads. Across a series of benchmarks done internally, Intel boasted that Sunny Cove core performance provided up to an average 18 per cent iso-frequency IPC improvement compared to Skylake.

You can see in the leaked CPU-Z single-core benchmark chart, below, that both Sunny Cove processors achieve impressive results, rubbing shoulders with some very fast and powerful CPUs. However, the greatest impression is made when you look at the relatively sedate clock speeds these engineering samples are running at. The Intel Core i7 1065 G7, for example, was running at 3.7GHz and scores 639 in the single thread test. That score is better than even the newest Coffee Lake refresh chips until they hit about 5.3GHz. 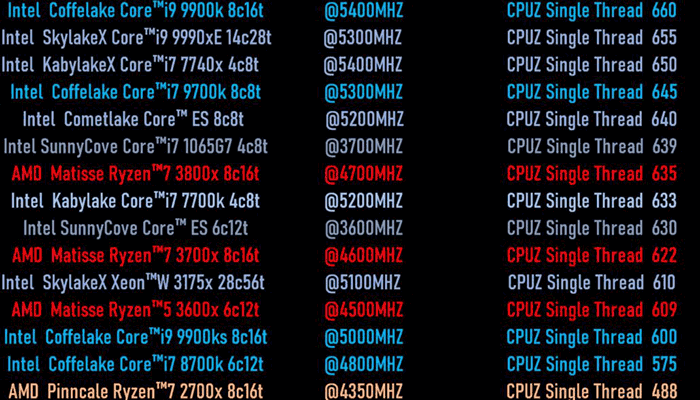 The first Ice Lake processors are destined for ultraportable computers which will become available ahead of Holiday 2019. Desktop Ice Lake CPUs aren't expected until after CES 2020.

AMD's Ryzen 3000 CPUs are represented in the above chart too. The Ryzen 5 3600X, Ryzen 7 3700X and Ryzen 7 3800X apparently ran the CPU-Z single thread benchmark and appear to show good IPC gains. AMD's latest and greatest desktop processors appear to be performing even better than Intel's latest desktop CPUs in these tests - in iso-frequency IPC terms.

It is less than three weeks until AMD's 3rd gen Ryzen desktop processors become available. HEXUS will have in-depth analysis ready for day-zero, the 7th July. Overall, 2019 is looking like it will be a vintage year for CPUs.

Posted by Tabbykatze - Mon 17 Jun 2019 10:17
This should have been plastered with “rumour” stamps everywhere. It's not just a wccftech article, it's a random dead link to a picture on baidu it came from. It is literally just a colour coded screenshot that looks like a CPU-Z output but with no backup, no watermarkkng, nothing. I could go and mock this up in a heartbeat in Paint for petes sake. Obviously anything “leaked” could be faked and mocked up but honestly.

It's very unjust for the CPU market to report this the way it has been. Sure it could be possible there is a 40% IPC uplift but it's either a misreport of frequency by CPU-Z (not the first time) or Intel really have sorted their game out.

I'd rather the latter but this is just beyond believabilty right now.
Posted by kalniel - Mon 17 Jun 2019 10:37
Very confusing ‘news’ article! Talking about chips not coming out until 2020, but concluding that:

The slide showing Intel are saying 18% increase in IPC at a given frequency is fine, but then it gets even more confusing as Hexus talk about a non-iso frequency picture and use it to make a comment about iso-frequency IPC, which as noted above is utterly dependant on an accurate frequency report in the first place. Why the 9900 and 9700 are only represented at overclocked frequencies I don't quite get.

So also in line with previous comment, I don't think this should have been presented under such a leading title. Also title implies there are more than one benchmark, but it only talks about one?
Posted by Iota - Mon 17 Jun 2019 10:45

*Buys bulk amount of salt*
Posted by Tabbykatze - Mon 17 Jun 2019 11:07
If we are doing crazy unreferenced benchmarks, here's a geekbench with a massive 69% increase in performance versus skylake! Orrr, that's just one type of metric…

https://m.imgur.com/S8Z339c
Posted by Hicks12 - Mon 17 Jun 2019 12:49
Like I know you say take it with salt but its clearly fake right?
AMD Pinncale Ryzen is for starters typed wrong and it should be Pinnacle Ridge if I am correct.

Intels 18% IPC is such a bold claim I cannot reasonable accept it as truth, Intel are just as bad (if not worse) than Nvidia for lying/bending the truth so I expect to see very limited scenarios (probably AVX related) and thats it. Rest of the chip will be no better and its extremely limited in the mobile market, ryzen will have sizable market share by the time this gets to desktop.