Over the weekend AMD France prematurely published benchmark scores for an as yet unreleased second gen Ryzen Threadripper CPU. A Guru3D forum user shared the information concerning the Ryzen Threadripper 2990WX. This 32C/64T processor and its Cinebench benchmark score was listed on the footnotes of a page since taken down. Thanks to the Google Web Cache you can still see the footnotes here though.

I've tabulated the AMD labs comparison below for clarity:

Above AMD pitted its new 32C/64T CPU against Intel's current enthusiast flagship, the Core i9-7980XE, which packs 18C/36T. AMD's processor is approximately 50 per cent faster in this rendering benchmark. 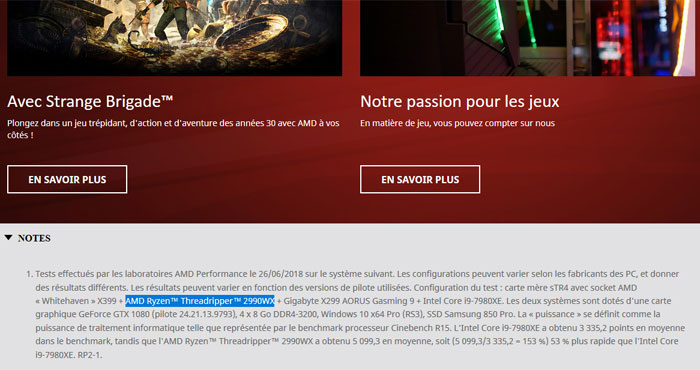 According to a leak published by VideoCardz just ahead of the weekend, the upcoming Threadripper 2990WX will cost $US1799 at launch. This compares very nicely with the Intel chip in the benchmark comparison above, which has an MSRP of a dollar or two under US$2000. In this leak story we are told that a 'WX' suffix means that the processor has been designed for "creators and innovators". Meanwhile 'X' suffixed processors are for gamers.

This is possible, Intel could pull out all the stops. However price wise i think the richness of value and compute power will rock the top end range of CPU lineups.

Very impressed with this offering. I am looking forward to Intels answer. This is because Intel will have to pull out all the stops or brutalise their prices
Posted by Ozaron - Mon 06 Aug 2018 11:19

Tabbykatze
…or brutalise their prices

Ozaron
Why do you do this to yourself?

After years of hardly any real progress from Intel and constantly taking the smeg out of consumers with apparently pointless socket changes, confusing product lines, etc I'm quite happy to see them get crushed. By constantly holding back on R&D because they were so dominant in the marketplace they're now not in a position to respond properly. We saw their hasty response to Ryzen - if they'd been doing things properly they'd have had a well tested platform ready to deploy knowing they could hold back if Ryzen flopped. But they had to rush out some answer and it was a mess. Now they're having to do what they should have been doing all along which is to compete and innovate. Really, all I'm seeing is them using marketing tricks to make it look like there's progress when it's really quite limited. In a sense they seem to be doing what AMD had to do all those years ago when they were behind on IPC - throw more cores at the problem.

Intel made this bed, now they can lay in it. I look forward to a resurgent AMD. Will I be buying a TR? As much as I'd love the bragging rights, no.