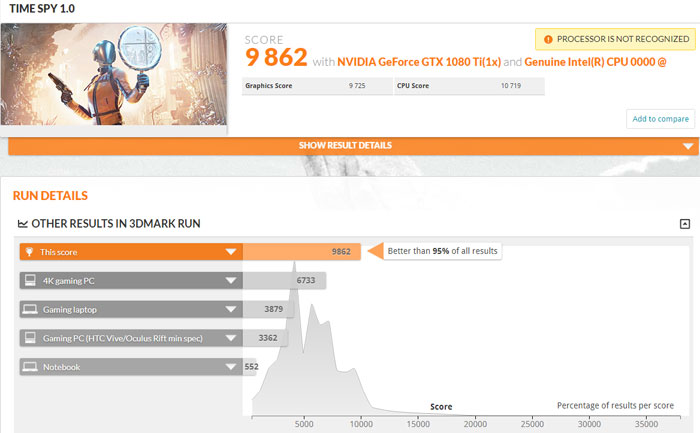 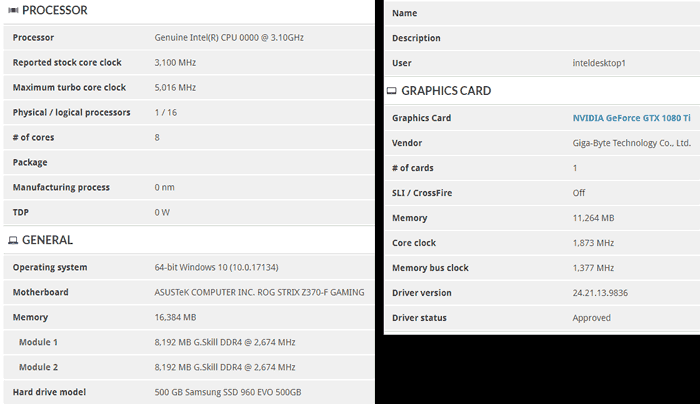 Directly above you can see the system configuration used by Apisak. Understandably, the CPU wasn't recognised by the benchmark but it could see that the CPU had 8C/16T and base/boost clock speeds of 3.1GHz / 5.0GHz. The Thai overclocker used an Asus ROG Strix Z370-F Gaming motherboard for his benchmark runs, and you can see that a Gigabyte Nvidia GeForce GTX 1080 Ti was installed.

The above provides a good preliminary idea of the respective performance of the new Intel Core i9-9900K. What might be more interesting to some is the performance of the non-hyperthreading 8C/8T Core i7 chips and other more mainstream parts - along with the pricing. It looks like we won't have to wait that long until we can more thoroughly test the 9th gen Intel Core processors in HEXUS labs.

CAT-THE-FIFTH
The CPU might be an ES as it is running at 3.1GHZ instead of the purported 3.6GHZ though.

Tabbykatze
That's true, there have been some rumours about that in these reports

Although TBH I seriously doubt the 8C/16T version is going to be faster in gaming than the 8C/8T version and whether the 6C/12T CFL CPUs will be much slower than the 8C/8T CPUs.

CAT-THE-FIFTH
The CPU might be an ES as it is running at 3.1GHZ instead of the purported 3.6GHZ though.

Interesting to see the CPU score and comparison though, considering it can run ~16% faster than the 2700X it achieves a score ~17% higher. Really goes to show the improvements AMD have made in terms of IPC and the stagnation of Intel trying to push as much out of the old architecture. Pinch of salt obviously, considering it is likely an engineering sample being compared.

Dread to think how much Intel is going to try to charge for this though, I imagine it'll be a bit higher than ~17% difference :vacant: