In its report, Golem says that it is only a few more weeks until the release of the Core i9-9900K and thus more and more details are emerging through partners, distributors and so on. It has talked to several such "Intel-related" sources, which have "independently confirmed that Intel connects the metal lids to the processor via solder." Translation and phrasing is taken directly from Google Translate. 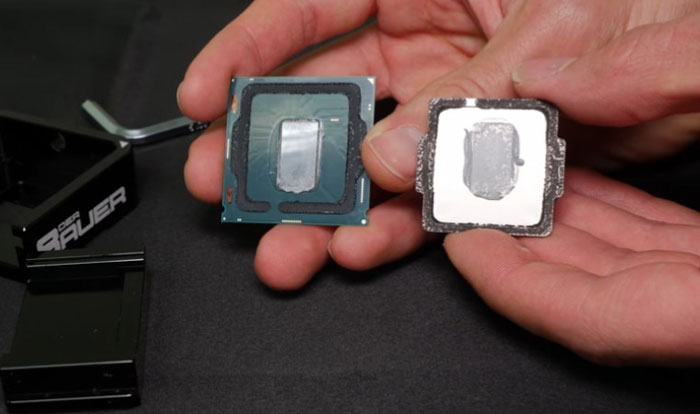 The move to metal solder is exclusively to the octa-core processors, says Golem. Those processors with six cores or fewer will simply use classic thermal compound under the IHS. Intel has chosen to move to a soldered IHS for at least one reason - it can deliver a 15 to 20 degrees Celcius benefit, meaning these processors can run at higher base and boost clocks. Remember, the rumours point to the top-end Core i9-9900K that can run at 5.0GHz boost on up to two cores, only reducing to 4.6GHz on all eight physical cores.

As well as the cooling performance benefits, Intel's top octa-core CPUs will benefit from not looking compromised in comparison with AMD's similarly targeted processors. As a flagship consumer, or 'halo', product range Intel doesn't want any unflattering comparisons quality wise as it seeks the best prices for its products.

Posted by watercooled - Thu 26 Jul 2018 12:38
If true it's probably out of necessity - 8 Skylake cores at close to 5GHz means a lot of heat to shift and would probably throttle quite significantly. It would be quite funny to see if the 8 core can get away with a basic air cooler when the 6 core struggles regardless of cooler used!
Posted by GinoLatino - Thu 26 Jul 2018 12:41

watercooled
it's probably out of necessity

It also means people who were defending Intel not using TIM for XYZ reasons,ie,its for the environment,it will damage the chip,etc can see the real reason - cost.