On Friday HEXUS reported that AMD had officially announced its Ryzen 7 and Ryzen 5 2000-series CPUs. Four models were announced in all; the Ryzen 7 2700X, Ryzen 7 2700, Ryzen 5 2600X and Ryzen 5 2600. Pre-orders are open and retail availability set for Thursday 19th April and HEXUS will be allowed to publish its full review of the new CPUs nearer that time. Shortly after publication our article was updated with UK pricing and pre-order links.

As is often the case, some organisations and individuals publish benchmarks and other testing results ahead of what is officially condoned. Earlier today TechPowerUp reported that a PC enthusiast with the moniker of ‘TSAIK’ has already been overclocking the AMD Ryzen 7 2700X and Ryzen 5 2600X chips using LN2, and sharing the results. 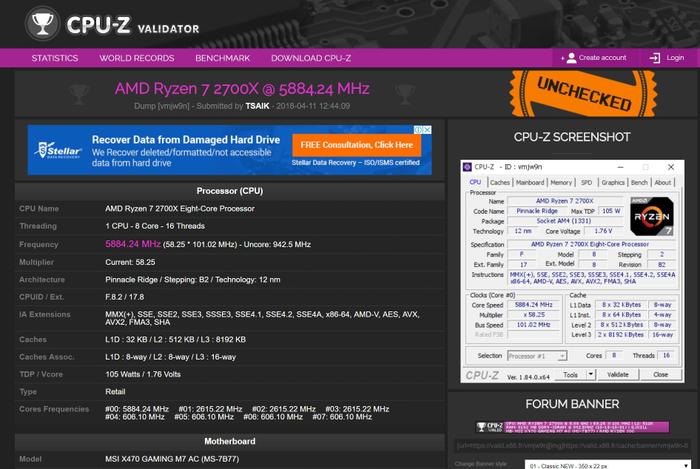 In the screenshots you can see the nitty gritty details of these overclocking attempts. Starting with the more powerful 8C/16T AMD Ryzen 7 2700X, you can see that an OC of achieved 5.884GHz with a 58.25X multiplier on a 101.02MHz base clock - the core voltage was set to 1.76V. An MSI X470 Gaming M7 AC was the motherboard of choice.

Turning to the 6C/6T AMD Ryzen 7 2600X, it was very slightly slower in GHz terms, at 5.882GHz. TSAIK used the following settings to achieve this OC; the same 58.25X multiplier (as above) with 101 MHz base clock, and a slightly higher core voltage of 1.768V. This time around an MSI X470 Gaming Plus was used for the OC shenanigans. 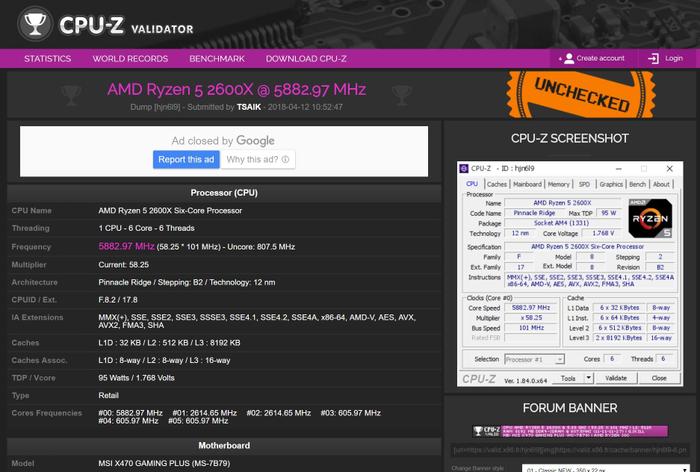 Looking elsewhere in the system configurations you can see that the overclocker used a single 8GB stick of G.Skill Trident-Z DDR4 memory with both setups.

The above LN2 OC might be academically interesting but we’d like to see how these new Ryzen 2000 processors overclock using more common-or-garden air and hybrid coolers.

Ugh I could quadruple my thread count and plausibly hold the same single thread core speed with a 2700X stock on X470. And the CPU would cost a mere 50 quid over what I paid for 6600K. I don't need to do it, but, this burns a little.
Posted by Ross1 - Mon 16 Apr 2018 14:30
The benchmarks ive seen show AMD is quite simply blowing Intel out the water. Seems like they would be more useful for hexus to post that meaningless LN2 overclocking that applies to literally no-one reading it.
Posted by MLyons - Mon 16 Apr 2018 14:40

Ross1
The benchmarks ive seen show AMD is quite simply blowing Intel out the water. Seems like they would be more useful for hexus to post that meaningless LN2 overclocking that applies to literally no-one reading it.

DanceswithUnix
So slightly worse than a 1600X which hit 5.905GHz a year ago? First hit on Google, there may be better:

I think that maybe the exception rather than the rule, most results I've looked at show averages for LN2 on the original Ryzen were around the 5.3Ghz range with 1.97v (ish).