According to its in-house tests the AMD EPYC and Ryzen Embedded processors provide the following key improvements:

AMD is releasing EPYC Embedded 3000 processors in configurations ranging from 4 to 16 cores, with TDPs from 30W to 100W. Up to 32MB shared L3 cache with up to four independent memory channels are supported. They boast expansive, integrated I/O with support for up to 64 PCIe lanes and up to eight channels of 10GbE. 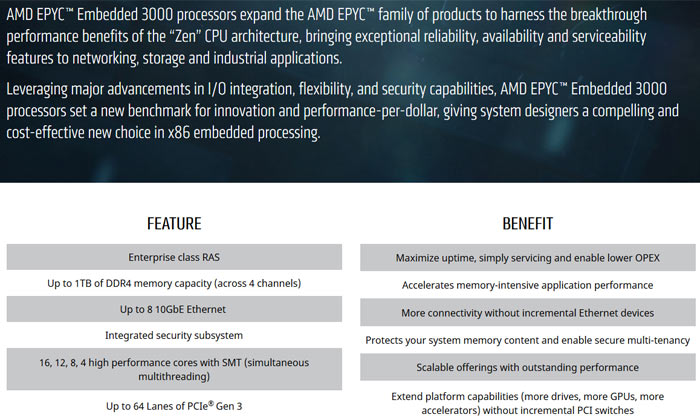 The AMD Ryzen Embedded V1000 processors deliver up to 4C/8T processing, and up to 11 GPU compute units, to achieve processing throughput as high as 3.6TFLOPS. These processors are up to 200 per cent faster than previous generations and can drive up to 4X 4K displays. Robust I/O capabilities that support up to 16 PCIe lanes, dual 10GbE and expansive USB options, including up to four USB 3.1/USB-C interconnects, with additional USB, SATA and NVMe support. TDPs range from 12W to 54W, offering scalability between performance and power saving requirements.

Already, AMD embedded customers have announced products based upon the new EPYC and Ryzen embedded processors. Above you can see one example, of the Esaote ultra-performance MyLab9 eXP ultrasound system for general medical imaging, women's healthcare and cardiovascular diagnostics, based on the Ryzen Embedded V1000 and targeting Q3 availability.