Today we have some new leaks / rumours about upcoming AMD Raven Ridge APU products. First of all we have product packaging and contents shots from Chinese social network Baidu, and secondly we have a set of purported benchmarks for six different SKUs (4x mobile and 2x desktop models) offering the combined might of Ryzen and Vega processing, which were shared by YouTuber Tum Apisak. 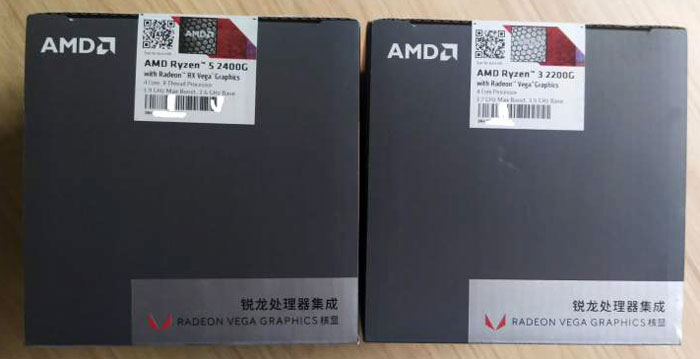 Starting with the product photos, above you can see what appear to be the two boxes for the Ryzen 3 2200G and Ryzen 5 2400G desktop APUs. We have published direct from AMD official news about these processors previously. At the CES 2018 there was an initial unveiling event with quite a few tech slides shared. A fortnight later AMD published more detailed specs for the Ryzen 3 2200G and Ryzen 5 2400G on dedicated online product pages.

Further leaked photos reveal the actual processor peeking out from within the inner packaging and a photo of the bundled AMD Wraith Stealth cooler. You can head on over to eTeknix, linked above, for those extra pictures.

On pricing, you will likely recall that AMD has already told us MSRPs in US dollars. The Ryzen 3 2200G and Ryzen 5 2400G will be sold at $99 and $169 respectively, given adequate supply. It is reported that the Ryzen 5 2400G is being advertised at approx equivalent of US $180 in Singapore. That’s not too far from MSRP at launch stage.

Somehow YouTuber Tum Apisak has laid hands on all the desktop and mobile APUs on the way. On his channel there is a video which appears to show the YouTuber poking around benchmark comparisons featuring the entire Ryzen/Vega APU launch canon. 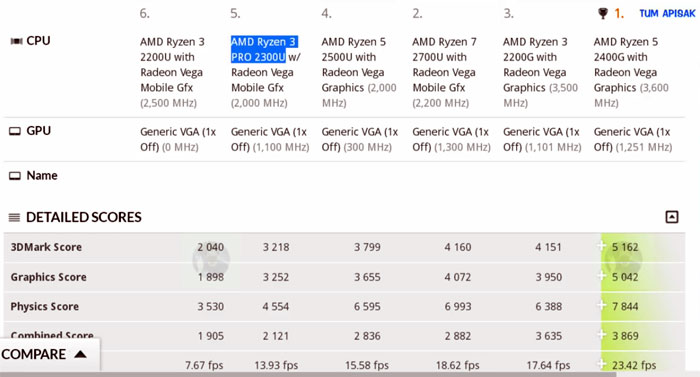 Using the performance present in 3DMark 11 the headline scores were as follows:

Enthusiasts will note that the AMD Ryzen 5 2400G’s score is somewhere between the typical scores of desktop PCs equipped with an AMD Radeon RX 550 or 560 GPU.

Tabbykatze
Looks like that R52400g is going to be my new budget build for low perf requirement users!

Interestingly, it's the combined score that makes the big difference there (the A12 is otherwise well ahead) - a sign of the better power management in Ryzen shining through? If so it should make Ryzen excellent for games that are both CPU and GPU intensive.

scaryjim
If that 2200U score is right, the lowest performing Raven Ridge is only 100 points behind the highest performing Bristol Ridge - https://www.3dmark.com/fs/12875630

Interestingly, it's the combined score that makes the big difference there (the A12 is otherwise well ahead) - a sign of the better power management in Ryzen shining through? If so it should make Ryzen excellent for games that are both CPU and GPU intensive.

The 2200G should technically be around £85 at current exchange rates too.

So hopefully the reduction in L3 cache from 8MB to 4MB,won't effect performance in games too much.

Even the CPU score seems a tad higher and the graphics score is quite close.

I wonder how this will translate in games though??
Posted by Firejack - Wed 31 Jan 2018 14:27
The Ryzen and Vega cores look mighty impressive but there is no way DDR4 can meet their bandwidth needs for gaming. Unless, has widespread adoption of hUMA (http://hexus.net/tech/news/cpu/54709-amds-heterogeneous-uniform-memory-access-huma-detailed/) been added to popular OS's and Game Engines?