The two world record breaking results are bullet pointed below: 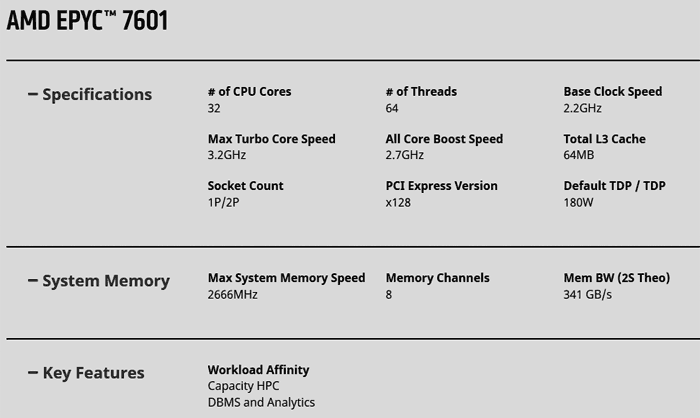 AMD says that the HPE DL385 performance is delivered by the dual core server (64 cores in this example) which can access up to 4 terabytes of memory (32 DIMM slots per server), and 128 lanes of PCIe connectivity (providing the ability to support up to 24 NVMe SSDs with four PCIe lanes to each SSD). It goes on to boast that, thanks to Epyc, this server can achieve up to 50 per cent lower cost per virtual machine (VM) than traditional server solutions.

HPE expects the 2P 2U HPE ProLiant DL385 Gen10 to sell well as it targets the heart of the high-volume market where dual-socket servers are frequently deployed by service providers, large enterprises, and small-to-medium size businesses. The server's combination of high-performance cores, memory bandwidth, and PCIe connectivity options will make it rather attractive to buyers.

Beyond the key performance metrics, AMD believes there are other good reasons to go Epyc. The chipmaker highlights Epyc's built-in hardware based security and integration into the HPE Silicon Root of Trust. This validates the system firmware ahead of system booting. Additionally the AMD Secure Processor system supports secure encrypted memory and secure encrypted virtualisation.

HPE's ProLiant DL385 Gen10 server with AMD Epyc will be available from December 2017.

Biscuit
Indeed. This is worth exponentially more to AMD as a business than their desktop chips.

I can see it being easier to break into, but intel get substantially less money from servers than they do from desktop chips

Biscuit
Indeed. This is worth exponentially more to AMD as a business than their desktop chips.

I can see it being easier to break into, but intel get substantially less money from servers than they do from desktop chips

Should point out “Client computing” includes laptops and tablets as well, which are a bigger market than desktops. AMD aren't competitive in the mobile space right now.