AMD used its financial analyst day yesterday not just to share dry financial information but as a platform to talk about its exciting upcoming products for consumers, and data centres. A lot of information was shared about a diverse range of products so this particular article will be concerned about AMD's compute products - the CPUs and APUs.

Ryzen CPUs have seen "strong adoption" figures, according to Jim Anderson, SVP & GM at AMD Compute and Graphics business group, promising that what we've seen is just the start. "Our upcoming AMD Ryzen processor lineup builds on the foundation we have set to drive our further expansion into the high-performance desktop, premium consumer notebook, and commercial markets." AMD will be expanding its Ryzen offerings from both sides. At the top end it will introduce Ryzen Threadripper. As we have previously discovered via various leaks these Zen-based CPUs will offer up to 16-cores and 32-threads with a new platform with expanded memory and I/O bandwidth, designed for the High-End Desktop (HEDT) market. For product availability we are told Threadripper is scheduled for 'summer 2017'. At the other end of the market Ryzen 3 CPUs are scheduled for availability in Q3 2017. Meanwhile the momentum of Ryzen 5 and 7 CPUs will continue thanks in part to Ryzen-powered Windows desktop PCs from the 'big 5' OEMs coming to stores from Q2 2017.

Some information was shared about upcoming Ryzen Mobile APUs. These will mix Zen 4C/8T compute cores with high performance Vega graphics. AMD claims an "expected 50 percent increase in CPU performance and over 40 percent better graphics performance, at half the power of its previous generation." Consumers will be able to find premium 2-in-1s, ultraportables, and gaming form factors packing Ryzen Mobile APUs from H2 this year.

Looking at its business-segment interests, AMD will launch both Ryzen PRO desktop solutions, and Ryzen PRO mobile in H2 2017 and H1 2018 respectively. Of course these processors mix the powerful multi-threaded performance you expect from a Zen CPU with "enterprise-class support and top-to-bottom manageability". On the road ahead AMD promises to continue with refinements to the Zen architecture and and manufacturing process adoption. After Zen we will see "the 7nm 'Zen 2' and 'Zen 3' CPU architectures that combine smarter design with process technology advances and are expected to enable significant performance and performance-per-watt gains," said AMD. Upcoming designs will leverage AMD Infinity Fabric technology to efficiently create highly-scalable SoCs and high performance platforms. 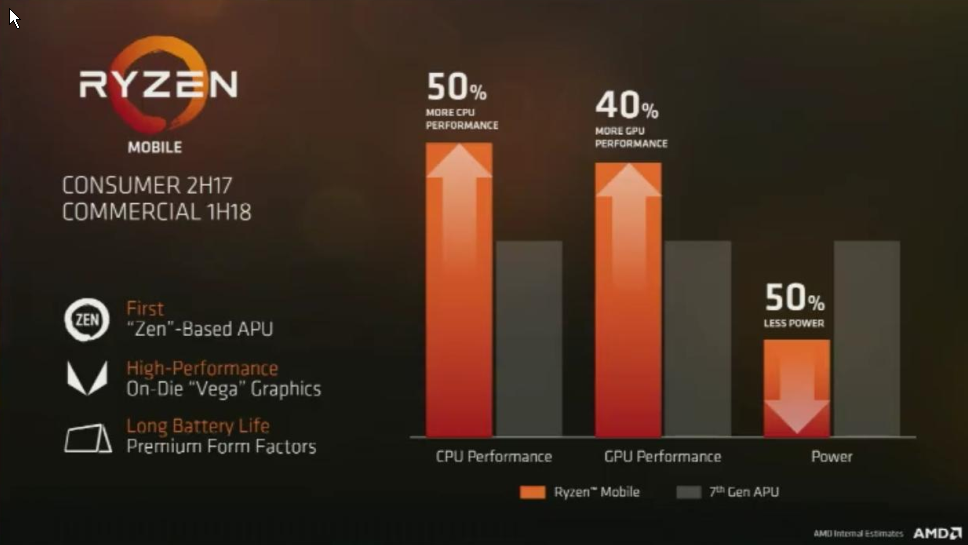 So assuming that Vega runs faster there shouldn't be any reason to go for 700.
Although, that slide is about mobile. So I guess the FX-9830P which is 512 cores@900MHz. I guess a lot of the -50% power is going to come from the CPU side and since Zen runs way more efficiently at <3GHz and so far we only know about 4C/8T parts, the CPU side is likely to be one CCX @ 2.5GHz or so?

CAT-THE-FIFTH
It could be 700 cores running at under 1GHZ?? This would certainly make sense in more TDP limited situations.

You're right. Wide and slow would work well. And for a 4 core Zen CCX to only offer CPU +50% compared to a 2 module 'dozer CPU implies their mobile parts are doing exactly that.
Posted by sykobee - Wed 17 May 2017 13:02
It's known to be 704 shaders in Raven Ridge. Basically that 40% higher GPU performance comes entirely from the additional shaders. Additionally, if Vega is more efficient per clock, the clock speeds may actually be lower. And that's how they are using 50% less power.

And that also leads onto the next thought - that APU GPU probably has a massive overclocking headroom, and that may actually get it to near RX460 performance.