The commonality of AIO coolers sourced from a handful of OEMs all but ensures there's no such thing as a bad all-in-one. There's little to fumble in a closed-loop solution comprised of radiator, tubing, CPU block and fans, yet when picking the right cooler for your next build it is worth contemplating each manufacturer's area of expertise.

be quiet! and Fractal Design insist on keeping noise levels down to a minimum, EK tends to put the emphasis on maximum performance, and Corsair typically finds a happy medium. You can't really go wrong with any of the aforementioned, but if you want an AIO that looks particularly swish, NZXT's Kraken offerings are well worth closer inspection.

The firm's Z-Series all-in-ones are already among the prettiest coolers on the market on account of the customisable LCD display squeezed atop the CPU block, but price tags well in excess of £200 put the flagship range out of reach of most users. Fortunately, the second-rung X-Series (pictured) is almost as easy on the eye and now comes bundled with RGB fans as standard.

We'd be inclined to lean toward the standard X63 at £130, though it has to be said, for those who favour lighting and synchronisation, our £160 X63 RGB review sample does look the part. As before, the 80mm x 80mm x 55mm cylindrical CPU block houses a seventh-gen Asetek pump expertly hidden by an infinity mirror ring LED. The effect makes the block appear hollow in the middle, and the smooth, seamless integration of RGB lighting works really well. NZXT's central logo isn't overly distracting, either, and better still, can be rotated in 30° increments by twisting the top cap to suit your build or orientation.

Attached to the pump via 400mm of nylon-braided rubber tubing is a familiar 143mm x 315mm x 30mm aluminium radiator, and NZXT bundles a pair of Aer RGB 2 140mm fans. Operating at speeds between 500 and 1,500RPM, the four-pin PWM blowers provide airflow of up to 91.19CFM and feature an RGB ring outfitted with eight LEDs to help create a uniform glow. They are, in our estimation, one of the better examples of RGB lighting done right, and a few neat tricks help simplify cable management. 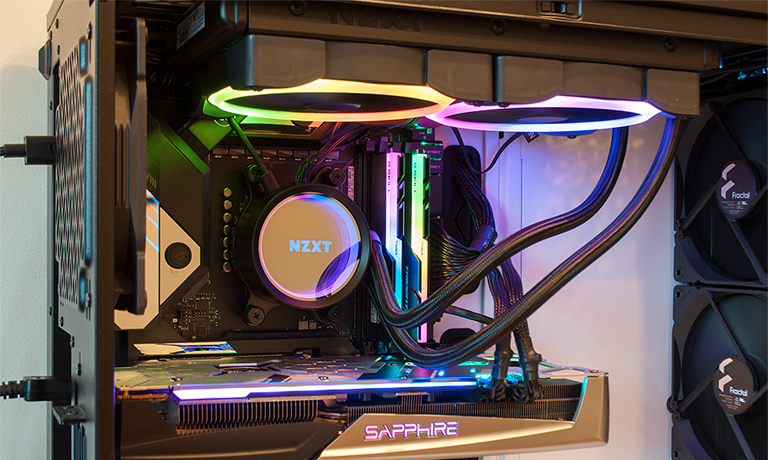 Each fan has in and out connectors for RGB wiring, allowing up to five to be daisy-chained together. NZXT supplies a short cable for attaching the two fans to one another, and a second, longer cable to hook up to the CPU block's RGB output. There's also a three-way splitter for connecting both fans to a single PWM header on the motherboard, though for the sake of overall tidiness, we would prefer fewer cables emanating from the CPU block. With everything hooked up as above, the cabling includes RGB output, three-pin AIO, SATA power and USB connector.

Still, extra cabling seems an inevitable compromise of RGB coolers with multiple fans, and NZXT's setup isn't difficult to keep tidy. Installation is a cinch - simply fit the standoffs to the motherboard and mount the block using thumbscrews and you're good to go. Being able to orient the cooler any which way is handy if you have clearance issues, and all the latest Intel and AMD sockets are supported. There isn't any spare thermal paste included with the bundle, so be careful not to make a mess of what's pre-applied to the contact copper plate, but NZXT does back its AIO coolers with a six-year warranty as standard, which is a year more than Corsair and double what's offered by be quiet! 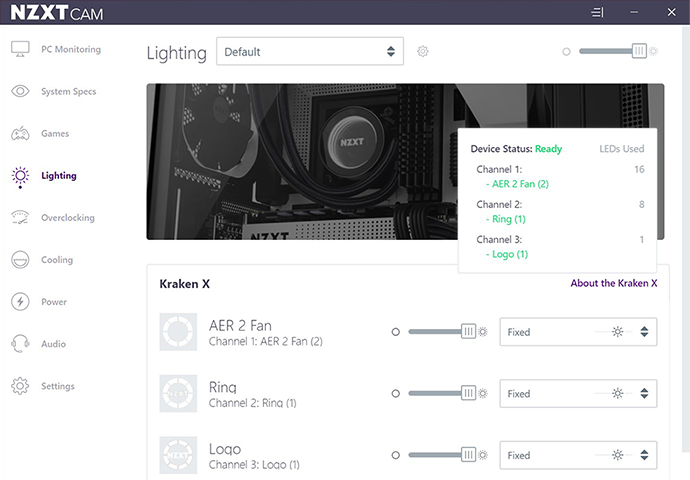 The final piece of the puzzle for most NZXT hardware is the accompanying CAM application. For the X63 RGB, CAM makes it easy to adjust lighting and create synchronised effects, as well as control pump speed and apply firmware updates. The latest release at the time of writing is v2.1 and, as before, we've found the default silent profile a tad aggressive in the way it quickly ramps up.

All things considered, the Kraken X63 RGB is simple to install, easy to customise and highly attractive in appearance. Let's now see if cooling performance is up to scratch.