More famous for chassis and coolers, NZXT strikes divisive aesthetic notes with its latest range of motherboards. Using almost full-coverage shrouds for a smooth, minimalist look, we took a look at the AMD B550 chipset version recently.

It follows that NZXT would extend the range to encompass Intel's Z590 chipset, so without further ado, here's the N7 Z590. 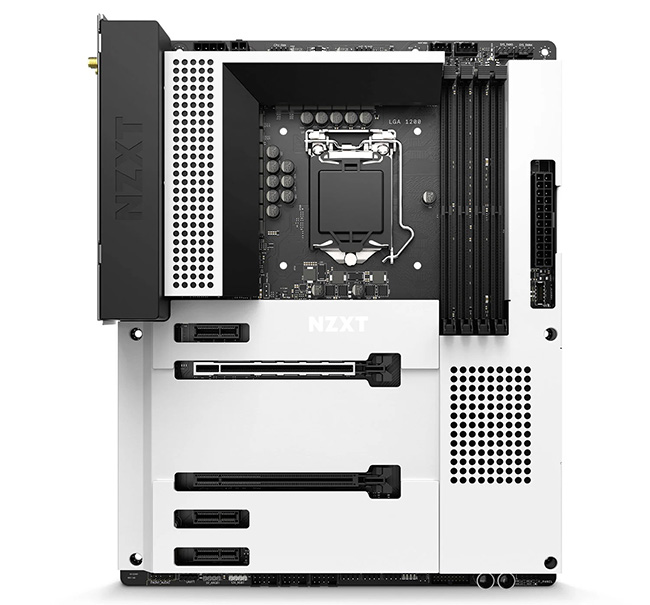 It's no surprise at all to learn that NZXT takes the existing N7 Z490 as a style base. Understandably, a lot of what's here is the same between Intel chipsets, minimising the work NZXT has to do to get this board to retail. This leads on to having only two M.2 storage slots - there is a third but it's reserved for WiFi/Bluetooth and presented in a Key E form factor - no integrated RGB, the same Realtek 2.5G LAN and ALC1220 audio, only four SATA ports, a trio of PCIe 3.0 x1 slots, and non-reinforced memory.

But Z590 does provide opportunity to up the specification, if not the number of ports. The primary M.2 slot, hidden under the topmost removable metal cover, is now PCIe 4.0 x4 compatible, thus offering double the speed if an 11th Gen chip is in situ. The good news is that, unlike others, the slot still works if you're using a 10th Gen Core CPU, albeit at PCIe 3.0 x4. The bad news is the metal cover still does nothing to help M.2 drives shipping without their own heatsinks, potentially inhibiting performance compared to peers that all carry some form of M.2 cooling. 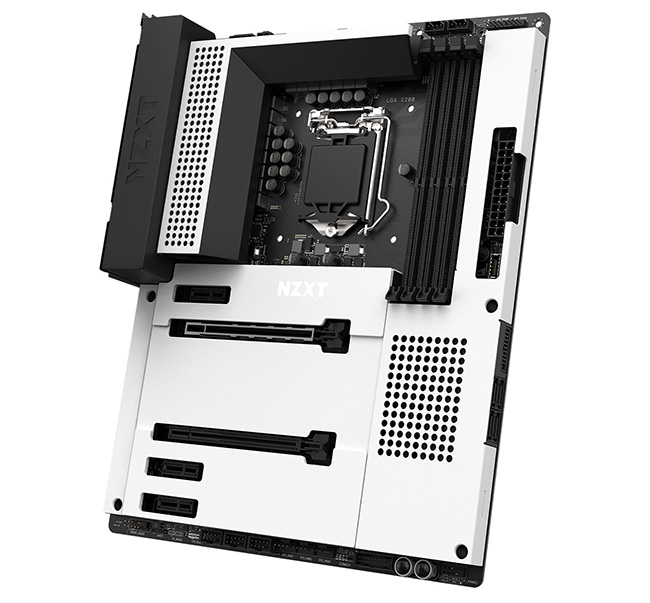 We know from previous experiences that NZXT teams up with ASRock to produce its latest boards. The N7 Z590 is no exception as it's based on features from the Z590 PG Velocita and Steel Legend offerings, though the exact configuration here is unique. Having a large topside shroud means all fan headers and other features are located at either the top or bottom of the six-layer PCB, grouped together sensibly by function. And if the white-on-black scheme doesn't tickle your fancy, the same board is also available in all-black livery.

Even understanding the lane limitations inherent in Z590, we'd prefer NZXT to have a third M.2 slot for storage: drives are cheap and abundant enough for all boards to justify a trio. Then there's only four SATA down one side, which is stingy. Those wanting colour can take solace in knowing N7 Z590 features a 3-pin 5V aRGB and 4-pin 12V RGB header, as well as two specific NZXT RGB headers just above the DIMM slots, all of which can be tied into the company's CAM software for easy control.

NZXT provides extra electrical oomph over the last generation through an uprated power-delivery system capable of handling 600A across 12 phases. More than enough to burn any Core chip without exotic cooling. There are no fans or heatpipes in evidence across the thick L-shaped heatsink, but there's enough finned metal to facilitate good cooling.

The I/O area is where Z590 typically scores big over its Z490. We're happy to see NZXT do the right thing and include a 20Gbps USB Type-C port. In fact, NZXT includes four more USB of varying flavours compared to Z490 and also ups the game by implementing the latest AX210 WiFi 6E. Arguably the only weak point is continuing with the last-generation ALC1220 audio when rival boards have started to feature the improved ALC4080.

The question we really ask ourselves is whether NZXT has done enough from Z490 to Z590 when compared with the competition. The answer is, just about, yes, helped by the board arriving at retail at the same £240 street price as its predecessor.


The BIOS, meanwhile, is redolent of ASRock's work. We know this because it looks eerily similar to the Z590 PG Velocita, albeit skinned in NZXT's preferred colours. That's no bad thing as it's fast and intuitive.

A few of aspects to be aware of. By default, NZXT does not enable Intel Active Boost Technology for Core i9 processors. The second is, like ASRock boards, the AVX frequency reduces significantly at default speeds, which we'll show you later on. Another is that setting Auto for memory mode sometimes invokes the slower Gear 2 speeds - one has to manually set it to Gear 1 in firmware.

Designed mainly for those who like the look of these boards and appreciate the modest uptick in specification, let's now see if it can hang with the big boys as we begin benchmarking.