Cases and cooling accessory maker Azza has emailed HEXUS about an interesting new mid-tower PC case it has launched. The new Azza Cast (CSAZ-808B/W) is described as a unique ATX mid-tower, and that is a pretty accurate statement, thanks largely to the Cast's flexing, detachable outer metal shell.

Any kind of new articulating design benefits from a video, showing the possibilities. So, I was happy to visit Azza's YouTube channel to find the above video entitled 'Meet Cast / A paradigm shift'. When non-flexed the Cast looks similar to a whole host of pleasingly minimal modern PC cases but the unfolding or flexing of its detachable panels looks like it will be useful, and visually pleasing, at least some of the time.

In its email Azza describes the outer shell of the chassis as removable but in the video it always keeps the right side panel affixed. Starting from an unopened state users can move a latch to open up the two curved panels as in the picture below right – where you see the case resting on its back panel. This action reminds me of those sports car gull-wing doors opening. Azza notes that you probably won't completely remove the shell unless you are starting your initial build into this chassis. After that initial build, you will typically gain easy inner access via the flexing doors. Depending on your cooling solution, case orientation, and environment you could leave one or more doors flexed open too. 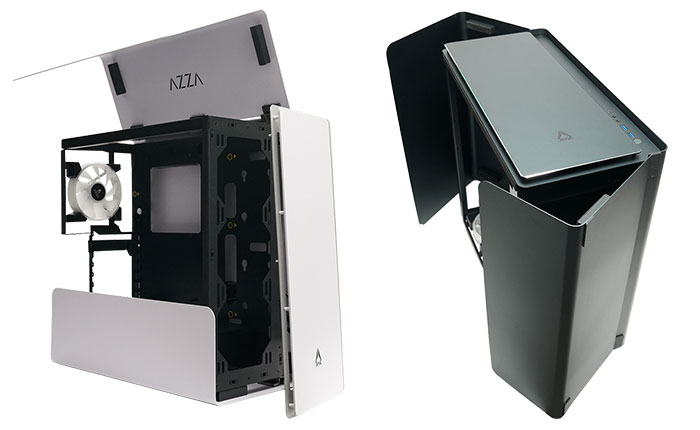 Azza has made the two large curved flexing panels from aluminium but the right side panel (when standing tower-style) is steel. The chassis frame doesn't need any panels/wings attached to build into.

OK, that's enough about the style and unique construction, let's have a look at the more usual defining specs for a PC case. Below, for easy and quick reference I have reproduced the key specs table where you will find the Cast's dimensions, capacity, max compatibility figures, cooling and peripheral support, and easy access I/O configuration.

Casting an eye over the above, the case's size is very typical of an ATX fitting mid-tower but perhaps the drive fitting options are quite limited. Elsewhere, it is good to see that the easy access I/O includes twin USB 3.0 Type-A ports as well as a Type-C port. 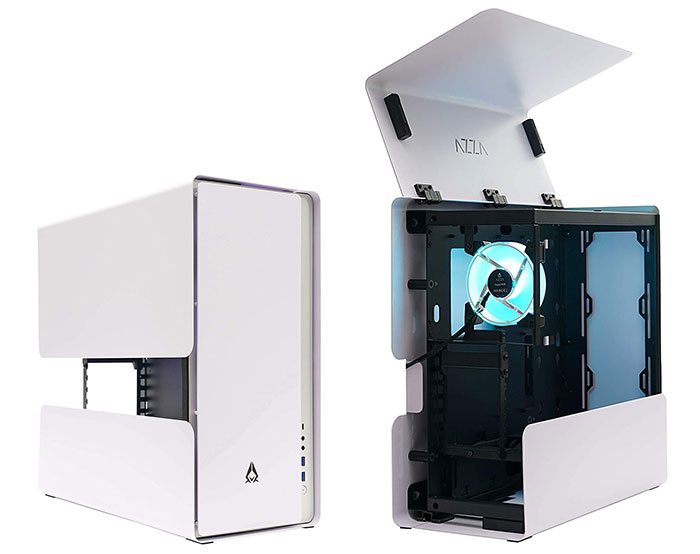 Azza says it will make the Cast available in black or white finishes direct from Amazon US. At the time of writing there appears to be no stock, but I'm not sure its they have sold out or not arrived at the retailer as yet. Price is said to be US$209.99 whichever colour you prefer.

The last time HEXUS reported upon an Azza PC case was back in August 2020, when it launched its Pyramid Mini 806 chassis.

Posted by LSG501 - Wed 03 Feb 2021 12:16
Nice enough looking case but it's not flexing in any way shape or form…. you can see the hinges that allow the ‘door’ to open…
Posted by wazzickle - Wed 03 Feb 2021 12:36
That's kinda a crazy price. I guess there's some appeal in a hybrid between an open test bench and a regular case, but for my money, the XPROTO does a better, more appealing, more interesting job.

https://www.youtube.com/watch?v=e0-yPnUsDyw&feature=emb_title
Posted by frozen-monkey - Wed 03 Feb 2021 17:49
The Hardware Canucks review of this case (but with a mesh front panel), about a month ago, is very good and highlights the massive flaws in this case.
Posted by Rubarb - Wed 03 Feb 2021 20:09
Nothing new my corsair 110r case flexes like anything due to no space for cable management, hell even the fans flex the sides when they are blowing hard :D
Posted by WeRoRa - Wed 03 Feb 2021 23:30
I was thinking of doing something similar in a mod once. If you dont care for dust its a fun concept and case to build in i guess.