PC case, PSU, and cooling firm Azza has launched a new 'innovative case' design dubbed the Pyramid Mini 806. While it looks rather an odd design, it sits comfortably among other Azza efforts such as the ATX sized Pyramid 804 and the various cuboid designs it offers. It is certainly a talking point, so probably most suitable for those that have a PC on display rather than squirreled under their desk. As a design made to be eye catching rather than entirely practical, Azza has thankfully fabricated it from "luxurious aluminium," and four tempered glass panels.

The Azza Pyramid Mini 806 uses a multi-level design to make the most of the diminishing space available the higher you get within the pyramid. At the bottom is room for your graphics card (up to 280mm) and SFX PSU. Hopefully that combo doesn't generate too much heat, or can efficiently expel it from the back panel cut out window. On the next level sits the motherboard tray for your mini-ITX board of choice, and of course you will mount essentials like RAM, cooler (up to 85mm tall), and M.2 SSDs to this. At the top is a 120mm Hurricane II digital RGB fan which helps expel the rising hot air via gaps in the glass at the top of the pyramid. Azza says you can mount a 120mm radiator under the fan too. There is room in the chassis for a further 2x 2.5-inch SSD/HDDs if you require. 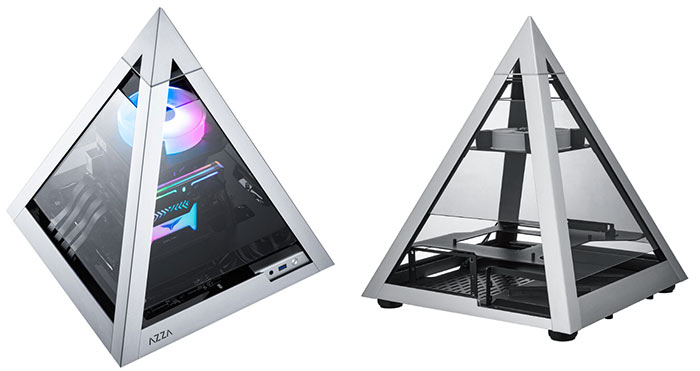 To get the above layout to work, specifically the GPU under the motherboard, Azza provides a 20cm PCIe extension cable. In the example build shown, the inside layout doesn't look too cramped. However, the size of this chassis is 435x368x368mm, which is rather bulky for a mini-ITX build, and it weights 6.3kg unpopulated. 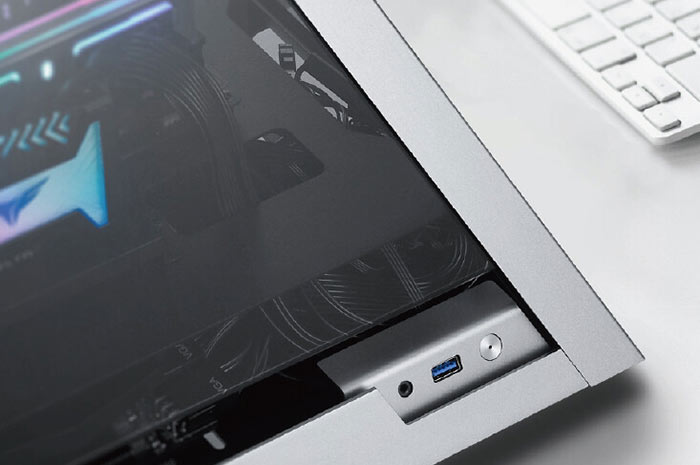 For I/O you can see that the front has a power button, HD audio port, and a USB 3.0 port. A large cut out in the back tempered glass panel allows normal access to the motherboard's rear I/O panel, as well as the SFX PSU power connector and GPU outputs. 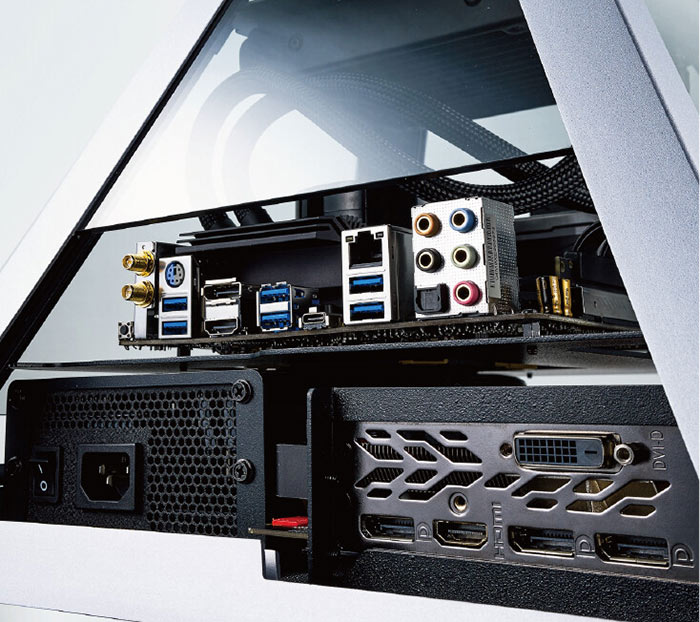 Expect to find the Azza Pyramid Mini 806 chassis available for purchase from November, priced at €249.90.

https://www.youtube.com/watch?v=TCMKqA3lCJg
Posted by Rubarb - Wed 05 Aug 2020 16:20
Seem to remember seeing a triangular case about 10 years ago too.

Although I do like the idea of it the final finish of this one just doesn't cut it, no I?O shield etc make it just look like a home made case.
Posted by samuraiweasel - Wed 05 Aug 2020 16:58
That rear airgap makes it look half finished, they could have made an aluminium plate with the rear io cutouts and it would have looked a thousand times better than that.
Posted by Ivanhoe123 - Wed 05 Aug 2020 17:38
Well it's certainly different, but looks like quite a niche product. I agree about the finishing of the air gap and I/O panel, it looks very out of place considering it's main selling point seems to be it's aesthetics.
Posted by 3dcandy - Thu 06 Aug 2020 08:42

Ivanhoe123
Well it's certainly different, but looks like quite a niche product. I agree about the finishing of the air gap and I/O panel, it looks very out of place considering it's main selling point seems to be it's aesthetics.

Tis at the back though so who really would see it? Unless of course it's central on desk