We have written much about how the new Ryzen 3000-series processors, based on the latest Zen 2 architecture, are able to strut their stuff by increasing instructions-per-cycle (IPC) and push performance to new levels. They offer an innovative chiplet design that contains the various bits of attendant I/O. Complementing the processors is the concurrent launch of the AMD X570 chipset, so let's take a closer look. 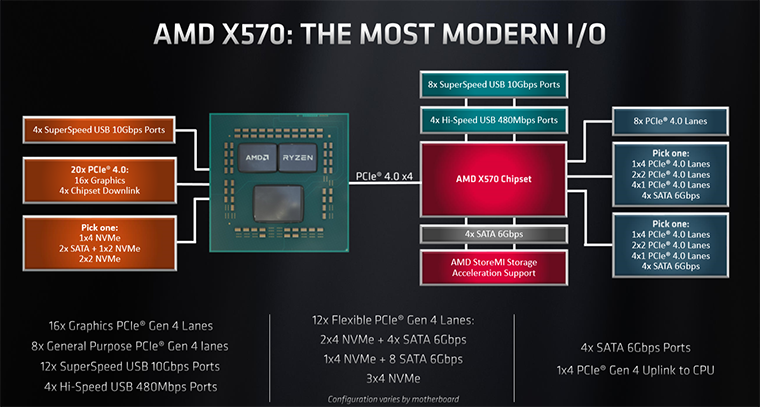 Here's the general overview of how the X570 chipset supports the latest Ryzen 3000-series chips. That's not to say that X570 is a one-trick pony; it also caters for Ryzen 2000-series chips, though first-generation Ryzen 1000-series, also based on the same AM4 floorplan, aren't certified.

Unlike previous chipsets, X570 is not designed by partner ASMedia - per X470 and X370 - this is an AMD affair. That said, ASMedia does have IP present here, just not in volume. There is reason why AMD has brought X570 in-house, if you will.

Those who did read the Ryzen 3000-series architecture understand that the chiplet design calls for a CPU block and separate I/O block that carries various cutting-edge connectivity. AMD is free to add a second CPU block, composed of up to eight Matisse cores, by connecting it to the same I/O section via Infinity Fabric. This is how the 12- and 16-core Ryzen 9 3900/3950X come into existence. Nice modular design.

TSMC manufacturers the 7nm CPU blocks, GlobalFoundries is tasked with production of the 12nm I/O logic, and then the chip is packaged up in either Malaysia or China.

The X570 chipset is also built by GlobalFoundries on the cheaper, more mature 14nm process. Here's the clever bit, and why all of this is referenced. The chipset is effectively a replica of I/O block of the CPU. Turns out that AMD has an agreement with GlobalFoundries to purchase 'X' amount of wafers. Getting to that amount, without undue financial penalty, means AMD uses the same floorplan as the I/O block and asks GF to manufacture them to a different specification. The X570 and I/O block, therefore, are one and the same thing from a high-level perspective. 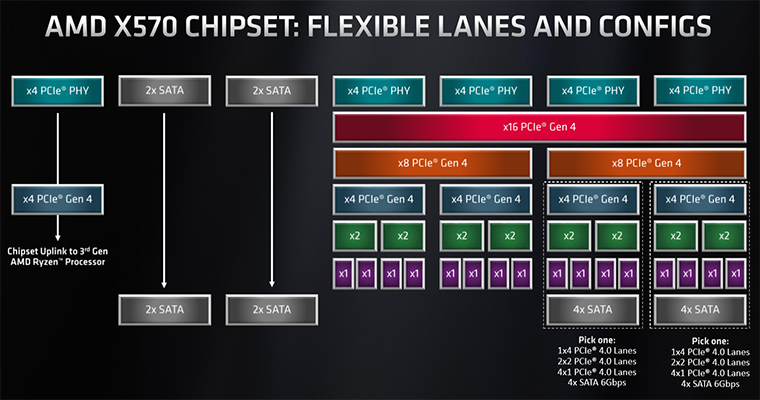 This I/O block-cum-chipset has its own repertoire of connectivity, and it offers plenty of implementation choice. AMD understands that SATA, whilst still popular, is giving way to a greater number of NVMe storage drives. This explains why the chipset focusses on the latter at the potential expense of the former.

PCIe laneage then becomes interesting. Most motherboard vendors will choose to pull eight PCIe 4 lanes and apportion them for peripheral support. These eight lanes, shown directly to the right of the SATA ports in the above diagram, can be split right down to individual lanes, so when you see a couple of x1 lanes, electrically and physically, on X570 boards, they probably come from here.

Then X570 gives you choice for, ostensibly, how NVMe storage is configured. The mobo guys can choose to implement it in two blocks comprising of four lanes each. Each of these blocks give rise to various PCIe combinations - 1 x4, 2 x2, or 4 x1 lanes - or can be set to SATA, though unlikely.

Bear in mind that PCIe 4 doubles bandwidth compared to incumbent PCIe 3, so a 1 x4 configuration has just under 8GB/s of transfer ability. Appreciating that a raft of super-fast NVMe drives are coming to market, led by the Phison E16 and E19 controllers, we expect most premium X570 boards to feature a couple of x4 M.2 slots for maximum speed. You could even add another from the Ryzen 3000-series CPU, too.

The salient point is that X570 has a lot of PCIe lanes running at twice the speed of X470. Want to build an ultra-fast storage subsystem on a mainstream socket? X570 is head and shoulders above the rest.

Combined with the CPU's I/O, X570 has a total of 12 USB 3.1G2 ports - four on CPU, eight on chipset - as well as four slower USB 2.0 coming solely from the chipset. Really, there is nothing much more that AMD could have added. There's adequate PCIe provision for 10GbE should motherboards want to use it.

Running all these high-speed interfaces does bring about one potential negative. The X570 chipset can run a lot hotter than its predecessor - AMD reckons it consumes up to 13W at full chat, compared to half that for X470, primarily down to the extra heat generated by running lots of PCIe lanes at such high speeds. Ensuring that long-term speed consistency isn't sacrificed as the silicon warms up when a host of PCIe 4 lanes are operational, most X570 boards will feature an active fan on the chipset.

We've spoken at length about how X570 is leading the way with respect to connectivity. A good question is how it compares to its immediate predecessor, X470, and Intel's rival Z390.

Ignoring what's available from the CPU, X570 is clearly superior to X470 in every way other than power. Intel's Z390 has plenty of PCIe 3 lanes but they're typically routed, with reference to M.2 NVMe storage, as x4. That's ample bandwidth for most drives, though not quite enough to service the newest generation. Intel's boards partners would have to construct a PCIe 3 x8 M.2 link for these new-fangled NVMe.

Framed in terms of storage, why should PCIe 3 x4 or PCIe 4 x4 M.2 matter to you, the enthusiast? That all depends on if you're interested in the latest slew of enthusiast-class models.

Here's a Corsair MP600 2TB NVMe M.2 SSD equipped with the latest Phison PS5016-E16 controller. It's benchmarked on an Asus Crosshair VIII Hero motherboard based on the X570 chipset. The left-hand benchmarks are run with the chipset's NVMe drive configuration set to PCIe 4 x4, whilst the right-hand benchmarks take in traditional PCIe 3 x4 common on most premium motherboards.

The drive is hardly slow in either instance, of course, yet the doubling of bandwidth afforded by PCIe 4 is reflected via best-in-class sequential transfer rates. Want supreme speed? PCIe 4 is the way to go.

AMD's X570 chipset makes the ideal bedfellow for the Ryzen 3000-series CPUs that also support the PCIe 4 specification. It is likely that vendors' roster of X570 boards will match the Intel equivalent on a model-for-model basis. Pricing is also expected to be consistent with Z390 versions, as well, so expect to pay close to £200 for a mid-spec X570. Readers ought, therefore, to expect a 20-30 per cent hike on X470 boards bearing the same name.

We'll have a bunch of X570 motherboard reviews in the coming weeks. Stay tuned for those.

MRFS
In the first image “AMD X570: THE MOST MODERN I/O” see where that diagram says:
x8 PCIe Gen4. Does that mean the X570 chipset will NOT support “4x4” AICs
like the ASRock Ultra Quad M.2 AIC? The latter AIC needs a single x16 slot
to “bifurcate” those lanes into 4 @ x4, hence the nomenclature “4x4”.

Good question. From a slot signalling perspective, you'd need to have a full 16-lane slot. Despite the red “x16 PCIe Gen 4” block in the second slide, I haven't yet seen any motherboards with such a configuration (full x16 slot via X570 chipset) - and even if there were any, it'd be pointless from a performance standpoint due to having to funnel all that bandwidth over a x4 Gen 4 link to the SoC.

I think to max out M.2 provision on X570, one would first need to have an X570 board that offers 2x x16-physical slots wired to the CPU (not all do). These slots can be run as x8x8, and then a 2-way AIC to go into one of these alongside a GPU (assuming this is a desktop that needs a display card). Otherwise, there's the HEDT platforms.
Posted by MRFS - Tue 09 Jul 2019 01:44
Thanks for your feedback, chinf.

So, the x16 “Graphics” slot might be available
to support a bifurcated “4x4” AIC.

It doesn't say how fast the “Chipset Downlink” is,
but it would be reasonable for that Downlink
to run at PCIe 4.0 speed e.g. see “1x4 NVMe”.