Apple updated its iPad Pro models in its Brooklyn event yesterday. The most significant changes come in the physical form. Gone is the sizable bezel and Home button that have remained for generations, and the new model is more angular too in its corners and flat edges. Overall, the new iPad Pros are more powerful and capable, but packed into a thinner frame and 25 per cent smaller in volume compared to their predecessors.

Like with its smartphones the elimination of the Home buttons comes with the introduction of Face ID. Apple made iOS Home button-less friendly a couple of revisions ago to tie in with the launch of the iPhone X, so modern iOS users are used to gesture controls now and shouldn't miss the physical home button too much.

Apple has used a screen technology called Liquid Retina which allows it to create screens that go edge to edge following the curves of the iPad unibody. It says this is the most accurate and brightest iPad display yet with True Tone, wide colour gamut, and with 120Hz refresh (so-called ProMotion technology) for smooth scrolling and responsiveness. Thanks to the new screen and design the new 11-inch iPad Pro packs a bigger display with more pixels in the same footprint as the 10.5-inch model. The new 12.9-inch iPad Pro places the largest display of any iPad into a more portable package. Yet both are just 5.9mm thick.

Inside these slender frames you will find basically the same specs. Of course the size, weight, screen size, and battery size vary (to deliver 10 hours connected use), but the inner tech specs remain the same.

Apple uses its latest A12X Bionic chip with 64-bit architecture, Neural Engine, Embedded M12 coprocessor to power its new Pro tablets. This is an octa-core chip with four performance cores and four efficiency cores for up to 35 per cent faster single-core performance. It can even use all 8 cores at once for a "90 per cent boost during multi-threaded tasks". The GPU now offers seven cores, twice the performance of the previous generation - on a par with the Xbox One S, said Apple during its presentation. The new A12X enables fast Face ID, Core ML tasks, and makes the new iPad Pro "the best device ever for AR".

Round the back of the devices Apple has equipped a capable 12MP camera with f/1.8 aperture, accompanied by a true tone flash. On the front you have the 7MP TrueDepth camera with f/2.2 and Retina flash, HDR. It supports FaceTime video, Animojis etc. Four speakers help deliver a rounded audio experience and there are five microphones for calls, video recording, and audio recording. 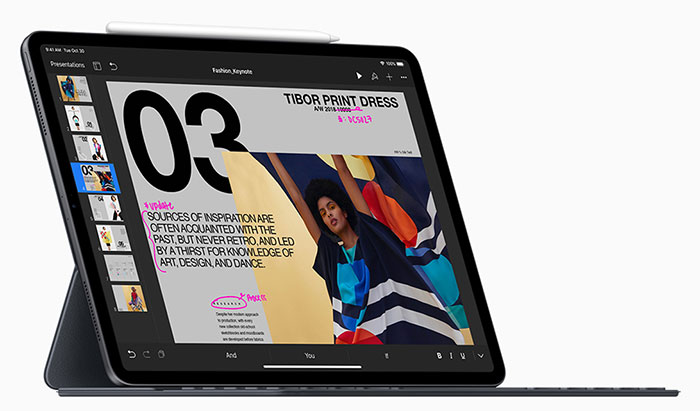 Buyers can choose built-in storage varying from 64GB, to 256GB, 512GB and 1TB. Another choice you will have is between Wi-Fi only and a Wi-Fi and cellular (mobile data) model with Nano-SIM, eSIM support, and GPS, GLONASS, Galileo, and QZSS. All models include a Digital compact, iBeacon microlocation, three-axis gyro, accelerometer, barometer, ambient light sensor. 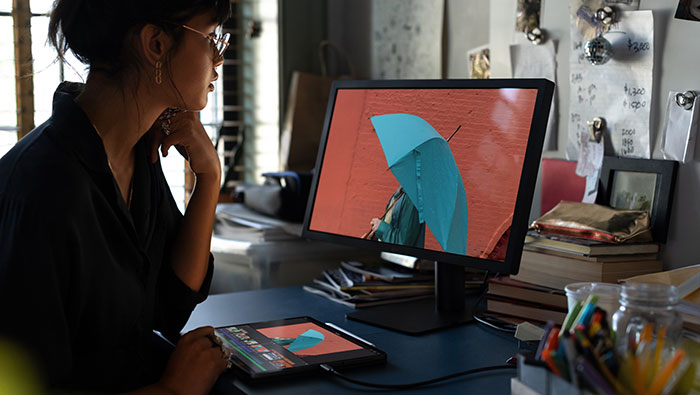 One last significant change is the welcome move to the USB Type-C connector. This is used for charging and expansion options and supports USB 3.1 Gen 2 for high-bandwidth data transfers, and can connect to external displays up to 5K (see example above). All the new IPad Pros come with iOS 12 pre-installed.

Bagpuss
Lol, just priced one of these up on their pre-order page and with all the extras you really do need, it comes to over £2K.

I just checked something and I'm never going to complain about MS pricing on their pen or keyboard again, Apple are even more expensive…
Posted by philehidiot - Wed 31 Oct 2018 12:35

Bagpuss
Lol, just priced one of these up on their pre-order page and with all the extras you really do need, it comes to over £2K.

All that money, all that R&D and all that capability. Whilst some will use it the majority of these tablets are to be bought by people with more money than sense and destined for a life of bog based pr0n viewing.