According to the latest market stats from IDC the tablet market is stuck between a rock and a hard place. On one side smartphone sales are growing with people preferring larger expansive screened devices. On the other side, the position of traditional PCs and laptops has strengthened with people buying into productivity focussed latest generation devices. Last but not least, first-time buyers are getting harder to find in the tablet market. 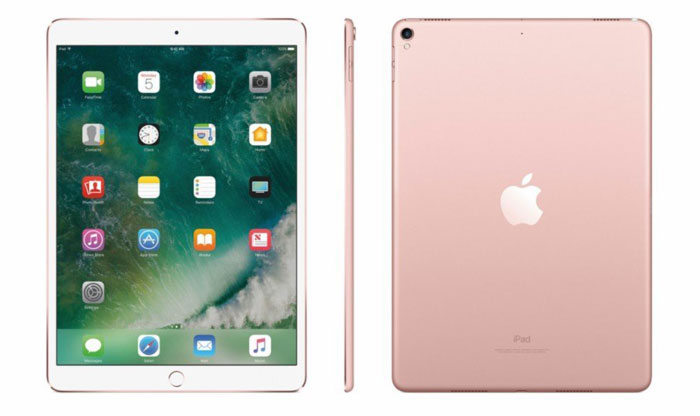 If you consider ‘detachable tablets’, such as the Microsoft Surface Pro or Apple iPad Pro, these too have experienced slower than expected sales over recent times, says IDC. In the case of the Surface, perhaps its Microsoft’s own Surface Laptop and Surface Book which have eaten into sales. Considering the iPad Pro, is it really worth the leap in price above the regular iPad for many users? 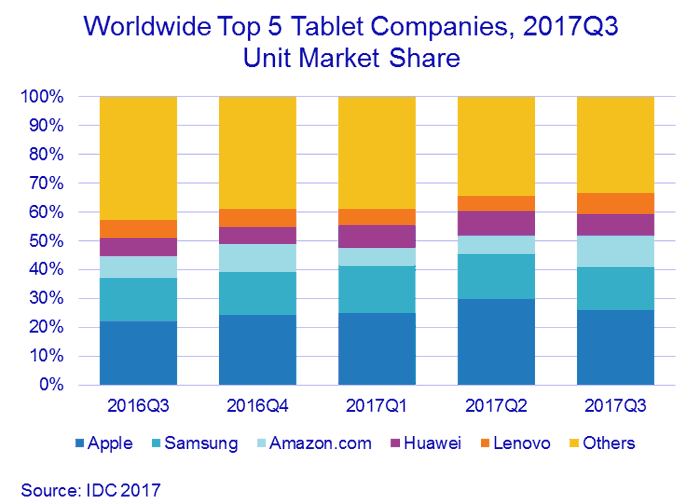 Apple is currently the biggest player in tablets and has actually grown its market share and number of units shipped year on year. It shipped 10.3 million iPads in the most recent quarter, up from 9.3 million a year ago. The second biggest player, Samsung, has seen a dip in its tablet sales over the same period, from 6.5 million to 6.0 million. The best year on year growth was from Amazon and its Fire tablets, with 38.7 per cent year on year and 4.4 million in sales in the most recent quarter. In equal fourth and fifth place are Huawei and Lenovo with 3.0 million in sales each, and both enjoying decent growth. 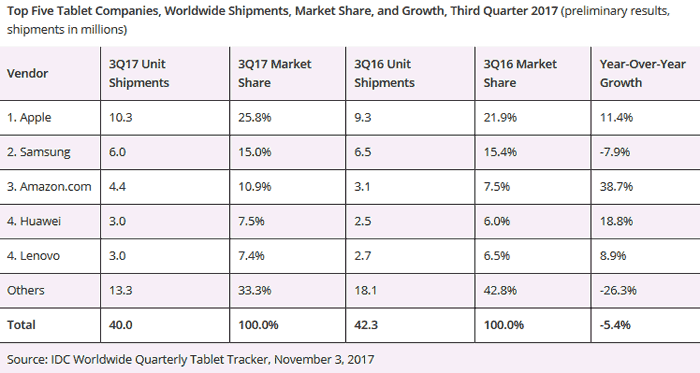 So, given the above, all the major players (except Samsung) are selling more and gaining market share, where is the negative impact on the market being felt? The answer lies among the lesser known, smaller players who are losing out to the more respected brands, as named above. The ‘others’ accounted for 18.1 million units sold in Q3 2016, that quantity has reduced to 13.3 million over the last year (minus 26.3 per cent). 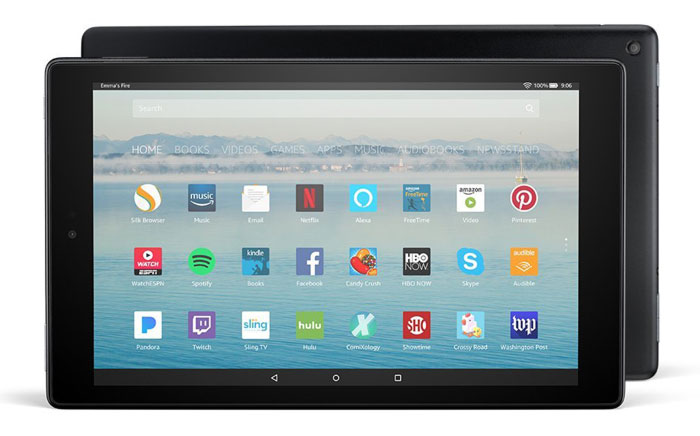 Looking at the overall figures it appears to be largely the case that Amazon branded products have scooped up sales from the reach of the ‘other’ brands. Amazon has an aggressive strategy in selling its hardware and often features its devices in its numerous sales events. Customers might be attracted to the well known Amazon brand, guarantee / service level on offer, and keen pricing when considering entry level tablets.

Posted by philehidiot - Wed 08 Nov 2017 13:12
I think the other thing here is that tablets tend to be bought outright whereas a smartphone is on an almost guaranteed two year cycle. The battery is usually toast after that period whereas the bigger battery in a tablet means it can loose 20% of capacity and still be usable, plus it lasting all day isn't critical like a smartphone. Add to that the use case of a tablet and that mine still has a Snapdragon 800 in it and runs just fine and you have no real need to upgrade / replace them very frequently. The only thing which might make you want to upgrade it is for a newer version of Android but frankly the people who care about that are few and far between.

I have a Kindle Fire 7 HDX and it's still going great several years on. Whilst I wouldn't choose a phone based on the Amazon ecosystem, for my tablet it works really well, integrating everything I want. That said, my phone can do everything my tablet can do and more, just on a smaller screen. This makes the tablet a choice often second to the phone which also explains why it is upgraded less frequently.
Posted by excalibur1814 - Wed 08 Nov 2017 13:24
When a tablet (Android/apple), any tablet, reaches the price of a standard laptop then it's reaching the arena of madness. Sure, I own an ipad mini 4, but as soon as I need to do anything of worth I reach for my desktop or laptop/Surface. Just look at the price of the iPad pro… utter madness no matter how nice they are.

Plus people already own the devices they like and, just like laptops/desktops, there's less need to change them every single year. Maybe the oems think that the general public are that dumb. Only phones to go and we'll have reached a nice situation. You can only sell the same crap to people for so long.
Posted by ik9000 - Wed 08 Nov 2017 14:04

excalibur1814
You can only sell the same crap to people for so long.

and that there is why they design them to break. It's why modern boilers/kitchen mixers/ovens/insert any other white good aren't as long lasting as what we used to get in the 90s. Built-in obsolecence. VE parts quality to make things cheaper to buy, and also preserve your customer base for the long run.
Posted by Bagpuss - Wed 08 Nov 2017 15:20
I'd like to update my Samsung Tab S Pro, but the equivalent model replacement, the Tab S2, still costs £330 nearly two years after it launched!!

Too much, I wouldn't pay a penny over £250 for one, given what I use it for (reading magazines) even if the 4:3 aspect ratio on the newer Tab S2 would be much nicer than the stretch ‘o’ vision 16:10, on my current tablet.

Kind of hoping they'll be on offer somewhere for Black Friday or new year sales.
Posted by Wozza63 - Wed 08 Nov 2017 17:21
Why buy an expensive tablet when I can get an ultrabook that can do so much more for the same price? Even sticking with Apple you can get a Macbook Air for not much more that can actually be productive.