A Microsoft patent has been unearthed which illustrates one possible solution to eliminating or minimising the gap between folding screens. The answer, which could provide a more seamless experience for users of upcoming devices like the Surface Neo and Surface Duo, is to simply insert a screen into the gutter area - a third screen to fill the space where bezels and gaps once lived uneasily. 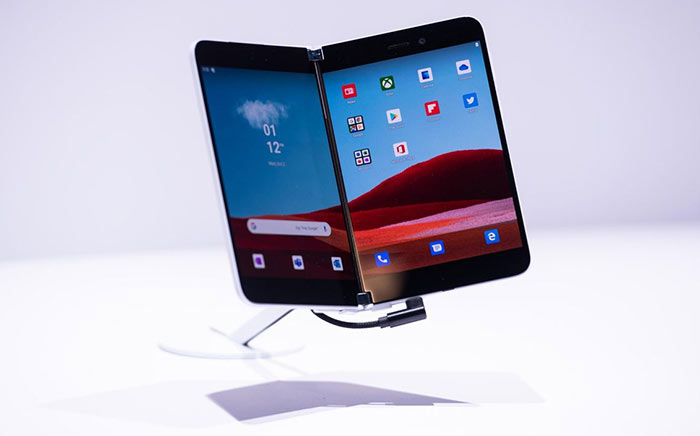 Microsoft bucked the trend somewhat by unveiling upcoming foldable devices with twin separate screens - rather than betting on nascent flexible/folding screen technology like Samsung, Motorola and others. However the gaps between the screens are considerable which will irk some, depending upon mode and content displayed on these devices. In particular 'full screen' use won't be optimal, though using the twin screens for multitasking or in clamshell mode (content - soft keyboard) will undoubtedly be pleasant. 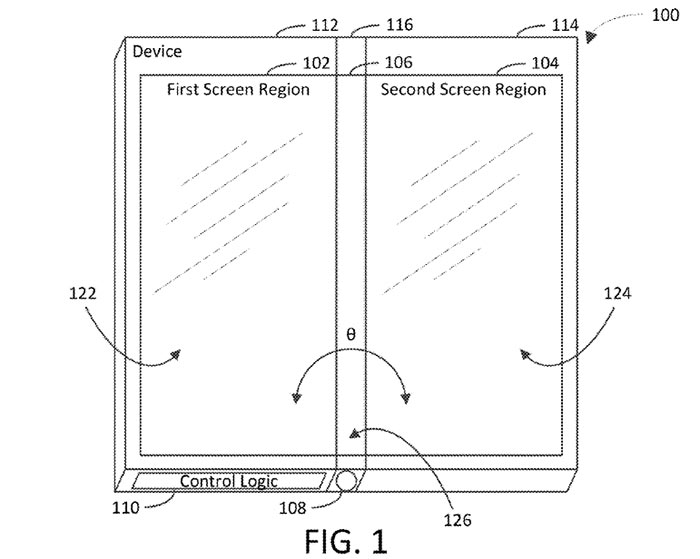 In its patent Microsoft says that a third screen can be used in the hinge area to provide a more expansive unified view. There is an interesting alternative put forward too - the middle screen could be used for "virtual controls, interface elements, notifications, bookmarks," and more.

The middle control screen becomes even more useful if the proposed folding device folds outwards, with the third screen then exposed as the 'spine of the book'. In this configuration the name of the third screen in the patent makes more sense - the edge screen. 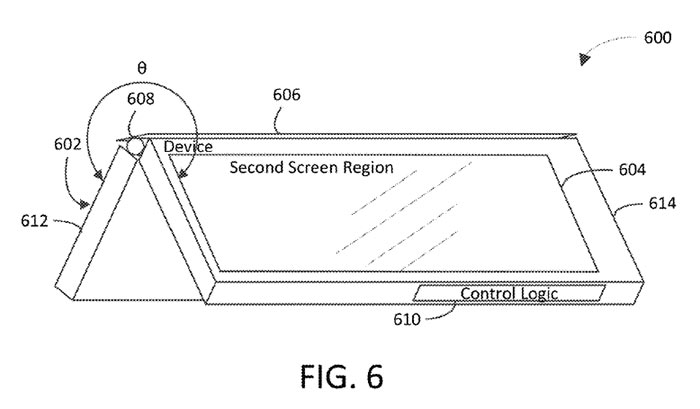 As is usual for patents we see like this, it is hard to guess whether the plans will ever make it to a shipping consumer device implementation. Another thing working against the progress of this concept is that folding screen tech from the likes of Samsung, LG and others will likely mature to become cheaper, more durable and better. The Microsoft patent in the spotlight was filed in July last year.

Gentle Viking;4190074
You could also just yell all the time, then you are sure on one will ever say to you “ im sorry i dident get that”
problem solved.

What? I think you might need to explain?
Posted by Gentle Viking - Sat 04 Apr 2020 18:26
Just seem like overkill to me bridging 2 screens with a third smaller screen, i mean people are comfortable with multi monitors with more or less bezel and distance in between them.
So to me it seem as futile as yelling all the time to make sure you are heard, so they try too hard i think.

People are also just fine spending hours upon hours doing just about anything on a single small phone screen, but maybe they think if the get a even bigger screen people will fall over each other to get to that.
Posted by Gentle Viking - Sun 05 Apr 2020 15:56
And don't get me wrong i al all pro big screen, my eyes are old and tired and soon i will need reading glasses to read my “large” phone screen.

Just seem like now there is a option to make screens flexible, this have lead to a explosion of devises witch can fold or slide in and out to make bigger screens.
it is a need i don't think are there for the vast majority of people.

I myself are tired of carrying a phone in my pocket, and other things too.
So looking forward to the day i can ditch my phone ( again )
If there was a better / smaller / more convenient way to carry cash i would even loose my wallet cuz that have always annoyed me too, both in times of it being thin and in times of it being fat with money.
I could of course just carry my visa card and my driving license, those 2 pieces of plastic are much smaller than a wallet, but i also have a equal big dislike for using plastic money, i have not done that since the late 80ties.

PS. my card got skimmed 2 weeks ago at a ATM machine in spite of me being well aware of the risks such a place :-( so right now as i only found out yesterday i wait for a new card.
Bank did call me last week to tell me they closed my card, but i do not take calls when unknown numbers are calling.