Microsoft has announced a number of offers to attract would-be purchasers of its Xbox consoles. A blog post on the Xbox Wire seeks to allure gamers to the platform with easy monthly payments schemes for Xbox All Access (hardware plus games and online subscriptions) bundles. New in this latest offer is that Microsoft is trumpeting an "all-new upgrade option for the next Xbox console, Project Scarlett".

Before discussing the Xbox Scarlett upgrade offers, it is worth talking about the Xbox All Access program. This is quite similar to a phone contract where you buy the phone and get service over a period of months/years. Microsoft's proposition in the UK, for example, is that you sign up for 24 months to a fee of £17.99pcm (Xbox One S All Digital), £19.99pcm (Xbox One S), or £24.99pcm (Xbox One X). There is no upfront cost and via Microsoft's partner bank in Sweden you won't pay any interest over the term. For your fee you get the console noted, plus 24 months of Xbox Game Pass Ultimate which includes unlimited access to 100+ games, and online multiplayer with Xbox Live Gold. 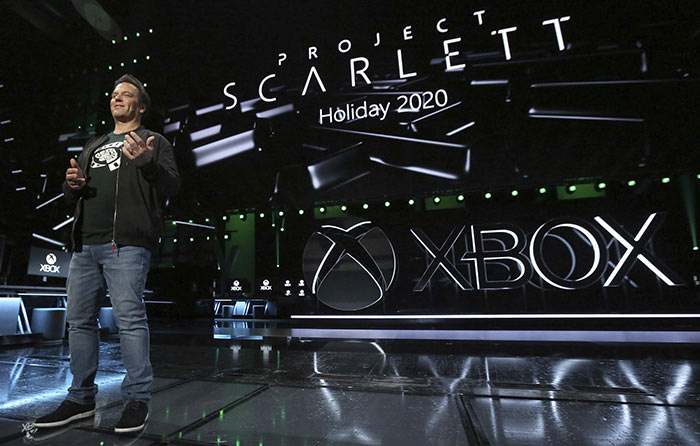 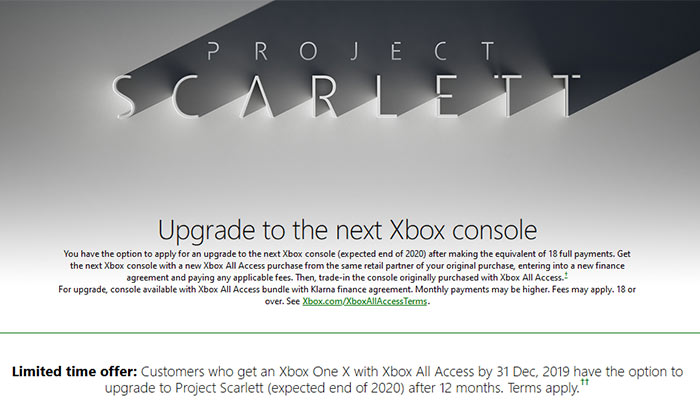 Upgrading to Project Scarlett can be done as mentioned above, but you will be entering into a new monthly contract. Since the release date and price of the next gen Xbox isn't yet decided we aren't advised of the price that these upgrades will be offered at. It should be favourable, as Microsoft and its partners will take your old hardware off you in part exchange. One has to retain judgement until pricing is known but in the mean time the Xbox All Access offers might appeal to those who prefer this goods/services purchase/payment model.

Posted by EvilCycle - Tue 29 Oct 2019 11:47
It's a good way to compete with Stadia and the extra cost can be warranted by the fact it is a full console that runs games locally. It will be interesting to see if Sony can push a refreshed campaign for PlayStation Now, they have a head start with this type of service and it seemed to be netting them some profit back in April, some special offers and big exclusive could really keep Sony ahead at this game.
Posted by Gentle Viking - Tue 29 Oct 2019 12:14
So Sweden.
That probably mean Danish tax payers will again pick up the cost, cuz the bank ( probably Nordea ) are on a HSBC level of evil and should be banned from doing banking /trading here if you ask me.

Thats what “you won't pay any interest” mean to me.