Respawn Entertainment revealed that it was working on a VR title based in the Medal of Honour universe nearly a year ago. On the opening night of Gamescom, last night, it shared the story trailer for Medal of Honour: Above and Beyond, specifically featuring the single-player campaign.

In the game you will play as an agent of the US Office of Strategic Services (OSS) in war-torn Europe. The video offers glimpses of action on land, air and sea. We see quite a bit of footage with the game character helping the French Resistance in sabotage and subverting enemy plans. Gamers will be able to immerse themselves in iconic battle scenes as far ranging as Tunisia and the Alps, and from parachuting behind enemy lines to sneaking onto a U-Boat. Meanwhile, there is a supporting "entire movie's worth of narrative performance," to help immerse you in this VR game. 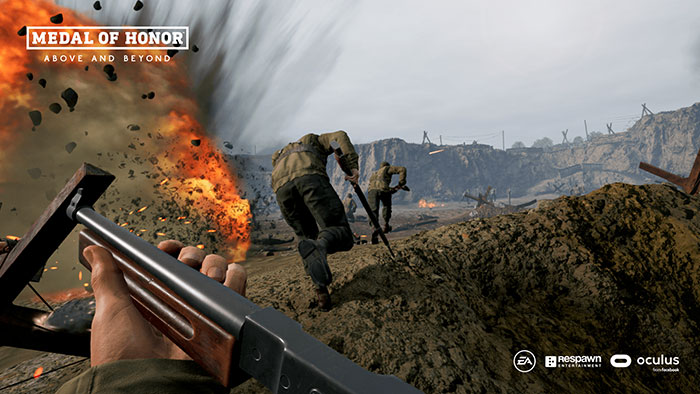 Game director Peter Hirschmann has been instrumental to the Medal of Honour franchise since the original 1999 outing. He says as always the focus is on putting the player in the boots of a soldier fighting in WWII, but this time the new graphics technology and VR will take it up to another level. "Once you put on an Oculus Rift, it’s the closest thing you can get to a time machine," said Hirschmann, describing the experience.

Medal of Honour: Above and Beyond will be released for the Oculus Rift and Oculus Rift S VR headsets on an unspecified date in time for 'Holiday 2020'. The game will ship with a range of multi-player modes too, but those must be the subject of a further trailer between now and the release.

Cunningly disguised as a US Army Ranger?
Posted by QuorTek - Fri 28 Aug 2020 16:58
sorry am not interested in any titles that is only supported well by one brand, it does not work that way anymore.