Do you remember the old days when graphics card makers longed for you to spend your hard earned cash on their wares that they would put together tempting bundles including the latest and greatest AAA games titles? According to a leaked promotional offer shared by VideoCardz, this promotional practice might be set to return shortly. 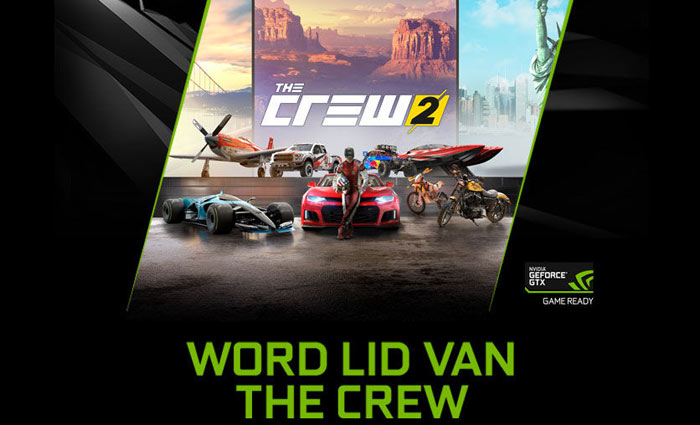 Looking back in the HEXUS archives and searching on the GeForce blog, Nvidia used to unleash new GPU and games bundles almost monthly until October last year. Then it seemed to give up on this promotional ploy.

Checking through AMD's GPU bundling history, you have to go even further back for such goodies to be seen. The last AMD games bundles were the convoluted RX Vega Radeon Packs, announced back in July last year. A couple of years earlier AMD's Never Settle bundles were much more generous and extensive…

Today VideoCardz spotted a promotion for Nvidia GeForce GTX 1080 and GTX 1080 Ti card buyers. I think the promotional graphic is in Dutch but the English translation of it is as follows:

For a limited time, buy a qualifying GeForce GTX product and receive The Crew 2 be the boss in Motornation with a graphics card, gaming desktop or laptop from the GeForce GTX 10 series. Explore cities, roads, rivers and America’s airspace in an open world, with unrivalled performance powered by Nvidia Pascal, the most advanced GPU architecture in the world.

Be sure to get Game Ready and receive the Standard PC edition of The Crew 2 when you buy a qualifying graphics card, desktop or laptop with a GeForce GTX 1080 or GTX 1080 Ti. 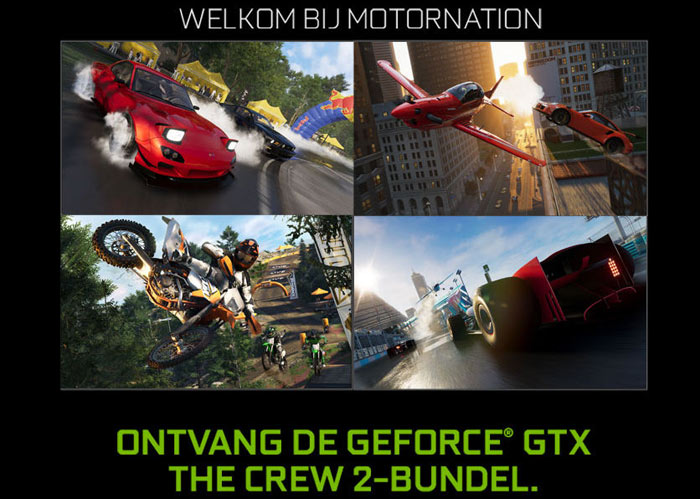 For a bit of background information about The Crew 2 - the minimum and recommended PC specs were published a little over a week ago. Interestingly, the game was featured on the Nvidia GeForce blog yesterday - with the sharing of a closed beta GeForce GTX Access Code, good until 1am PT on 4th June. The finished game is scheduled for release on 31st June.

With the Dutch promotional graphic leaked, and these promos often starting ahead of a game release, we might expect an official announcement of this new GeForce games bundle shortly.

gordon861
They are really starting to seem desperate to get rid of all these older cards before the new ones come. Did they screw up and produced shed loads of extra chips or something?

I doubt it, I read this as just Nvidia pushing hard for market share. When they just hacked a lot of people off with their abandoned partner program (I hope their partners wore a condom) they can't afford to just sit back, so given wielding the stick on the board makers didn't help I think they are trying a carrot on the consumers. If they can put together a desirable product package to bribe people against buying AMD for now, unless AMD pull their finger out and produce a competitor to the 1170 and 1180 then Nvidia get to dominate graphics for quite a long while.
Posted by fynxer - Fri 01 Jun 2018 17:47

gordon861
They are really starting to seem desperate to get rid of all these older cards before the new ones come. Did they screw up and produced shed loads of extra chips or something?

When the demand surged along with insane prices jan/feb with the mining boom nvidia stop bundling games. They knew they would sell the card anyways since miners bought them like hotcakes. So much for caring about the gamers, every thing comes down to $$$ with nvidia despite what they say.

Now we have 40% to 50% less sales compared to Q1 and nVidia is indeed getting itchy. Prices are dopping steady week after week making it a problem when soon releasing next gen. Remember when nVidia said that prices would be high the rest of the year for gpus, yea well that what they wished so the RRP could be set higher for next gen cards from the get go.

Now they have to take in to account market price when releasing the new cards and thus not get the fantasy prices they wanted for the next gen card. Funny how the market works.

Of course all company's need to make money but the actions of nvidia really shows their extreme greed when it comes to squeeze the gamers out of every dime, even dropping games bundling the first chance they get just to make a few extra buck.
Posted by persimmon - Fri 01 Jun 2018 18:41
Older stock plus AAA but mediocre game … yep thats a game bundle. Maybe a holding tactic till they get the mainstream new stuff out, eg 1160 and below. Intel is also teasing a follow up to their HADes canyon APU at Computax ….
Posted by Rubarb - Fri 01 Jun 2018 23:08
if they hadn't been so greedy shipping out to miners they wouldnt even have to do this.


If you know some one that mines … slap them