Microsoft has published a deep dive into its Xbox Velocity Architecture on the Xbox Wire news blog. Jason Ronald, Director of Program Management, Xbox Series X, provides insight into the technology which is referred to as the soul of the Xbox Series X - while the custom designed AMD APU is the heart of the system. In brief, the Xbox Velocity Architecture is a radical reinvention of the I/O system and isn't just about shoving an NVMe SSD in the system, that is but one of four key components.

Ronald provides a bit of background as to why something like the Xbox Velocity Architecture was deemed necessary. With the popularity of open world game environments and the demands they put on systems, Ronald notes that it is quite normal / traditional for game designers to "create narrow pathways, hallways, or elevators to work around the limitations of a traditional hard drive and I/O pipeline". With Xbox Velocity Architecture this restriction can be put to bed.

The four major components of the Xbox Velocity Architecture are as follows:

Custom NVMe SSD: this is of course hugely important to the Xbox Velocity Architecture. The 1TB SSD used by Microsoft is said to deliver 2.4GB/s of raw I/O throughput, which is more than 40x the throughput of Xbox One. However, this isn't a peak performance figure, it is sustained performance so game designers know they have this resource to tap into at any time. Microsoft asserts the Seagate Expandable Storage Cards compatible with the new consoles will offer "the exact same gameplay experience".

Hardware Accelerated Decompression: textures are a very large component of modern game data and with this in mind the new consoles have hardware assisted decompression. Without the custom hardware Microsoft estimates it would have to tie up four or more of the Zen 2 cores for these duties when textures are streamed in.

New DirectStorage API: This is a new DirectX component allowing developers fine control of multiple I/O queues, prioritization and minimizing I/O latency. It is said to be a low level API capable of taking full advantage of the raw I/O performance afforded by the hardware.

Sampler Feedback Streaming (SFS): Specialised hardware analyses texture memory usage by the GPU so it only loads sub portions of a mip level into memory, on demand, just in time for when the GPU requires the data. Microsoft says this innovation "results in approximately 2.5x the effective I/O throughput and memory usage above and beyond the raw hardware capabilities on average". SFS is thus an effective multiplier on available system memory and I/O bandwidth. 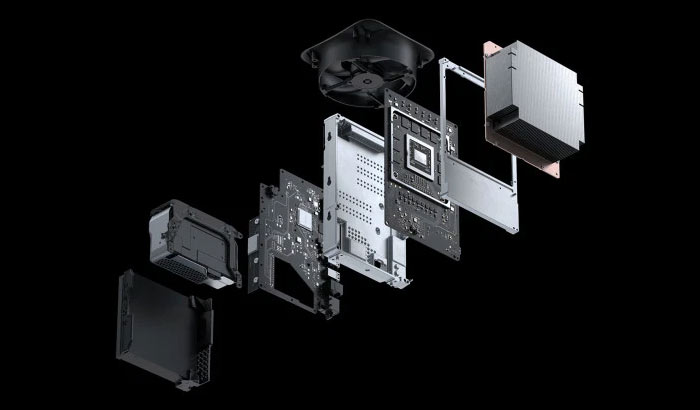 The Custom NVMe SSD and trio of supporting technologies - coming together as the Xbox Velocity Architecture - allows the Xbox Series X to deliver effective performance well beyond the raw hardware specs, reckons Microsoft. Sony has also played up the capabilities of its PS5 storage system which uses a so-called 'custom design' SSD, rather than an off the shelf PC component, as part of a custom I/O unit. It will be interesting to see how this battle plays out once the dust has settled.

rabidmunkee
Isn't the hardware decompression in the latest threadrippers?

They say Xbox architecture, as they are custom chips, I assume it is just custom take on new AMD tech. As Sony are doing similar things, maybe this is the case, but who knows?

In regards 4 cores or more required for hardware decompression, I'm unsure if this is a misquote or misunderstanding.

Either they mean 4 cores unavailable (cores are required for os and system) or 4 or more cores plus the 2-4 cores for system (not really 4, probably 2, possibly with 1 reserved).

So from 8 coresthey'd have anywhere from 2 to minus 1 core? Maybe they're taking all the top numbers as usual for marketing, to exaggerate it's effect.

Regardless, it seems promising and any improvement is a good thing, especially with most games being open, expanded areas now.

The one thing that worries me is “Seagate Expandable Storage Cards”. I've had several Seagate devices, all have failed.

Of the times I've tried to redeem a replacement (refurbished…..urgh..) under warranty, they've lived and tried not to honour their responsibility.

Granted they and Western Digital have a monopoly on mechanical hard drives now, but there is a lot of choice still in the SSD space. My guess is Seagate are desperate to stay relevant in this space, so have offered a very good price (they'll have a lot of stock available, as they don't make the sales other SSD manufacturers manage).

Hopefully they aren't supplying the internal SSD, but only the SSD / memory card storage.
Posted by KultiVator - Wed 15 Jul 2020 12:42
Interesting couple of weeks ahead as Microsoft reveal some gameplay for their upcoming exclusives next week and Sony will no-doubt be ready to trade a few blows in return.

PC gaming always benefits from an uptick in console capabilities, so I'm definitely going to be watching this closely.
Posted by Steviepunk - Wed 15 Jul 2020 13:26

Yoyoyo69
In regards 4 cores or more required for hardware decompression, I'm unsure if this is a misquote or misunderstanding.

Either they mean 4 cores unavailable (cores are required for os and system) or 4 or more cores plus the 2-4 cores for system (not really 4, probably 2, possibly with 1 reserved).

So from 8 coresthey'd have anywhere from 2 to minus 1 core? Maybe they're taking all the top numbers as usual for marketing, to exaggerate it's effect.

they aren't using any CPU cores for the decompression, they have a custom IO chip that handles that - they are saying that it would require around 4 CPU core to handle the same load that their custom chip does.
Since most home PCs require the CPU to handle the IO, they are just highlighting how much more efficient the Xbox design is over a standard PC.