There was a bit of a kerfuffle at the CES 2020 when AMD showed off a render of the Xbox Series X from all angles. However, it was just a third party render based upon the guesswork of TurboSquid, as it turned out. Meanwhile other sites and sources thought they knew pretty well what ports would be round the back of Microsoft's next gen machine. Now, Microsoft-centric site Thurrott.com has shared some firmed-up assertions concerning the Xbox Series X back panel ports. 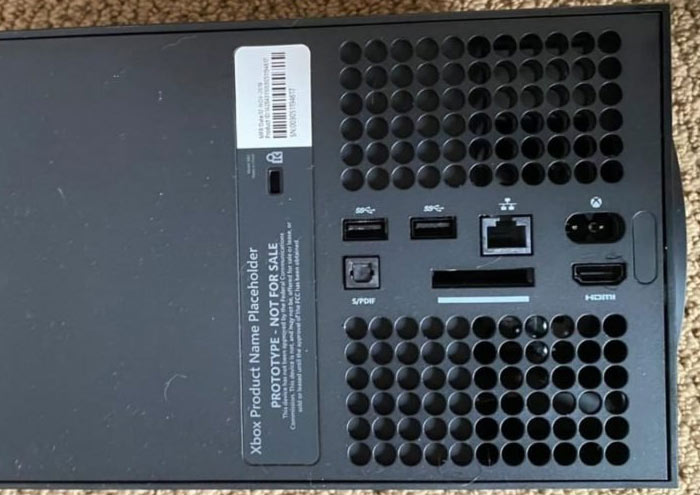 Above you can see what is purported to be an authentic image of the rear of the Xbox Series X. The ports you can see are as follows; from the upper left of the ports array you can see the two USB A ports, Ethernet, power, optical audio port, 'mystery slot', and a single HDMI port.

Thurrott.com was told by "people familiar with the company's plans," that Microsoft has provided this slot for storage expansion. As modern games are so storage hungry, a pre-installed SSD of say 1TB may only have capacity for nine or ten games. Microsoft wants to enable users of its new console to buy and install as many games as they like and its forward thinking designers want to provide optional extra capacity with the performance that its USB ports can't offer. 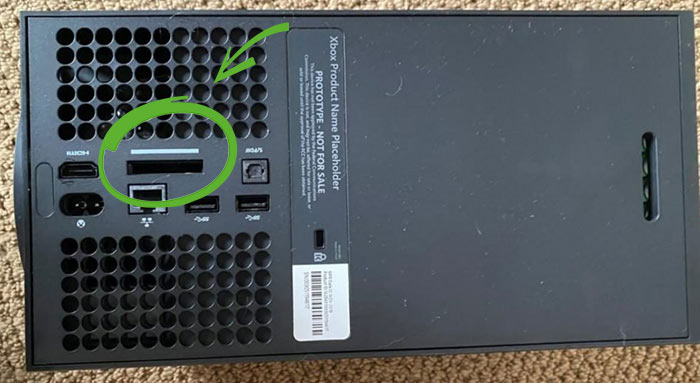 A wily Thurrott forum contributor did a bit of detective work and found that Phison's datasheet for the PS5019-E19T controller, being developed for or used by the Series X, provides CFExpress form factor storage expansion options. Type B CFExpress cards are 29.8mm x 3.8mm, which falls in line with the dimensions of the 'mystery slot' in the photo.

Currently CFExpress cards are very pricey at approx US$600 per half TB. However, Microsoft must be betting that it is an up and coming format which will get cheaper over the coming months, years.

In an extra console related news snippet today, Sony has published the first official product page for the PlayStation 5. There isn't a lot to see, or read, right now - just a landing page with the information that the PlayStation 5 is definitely coming, and it will launch in "holiday 2020". Sony asks visitors of its page to sign up for updates as it announces them. It will drip info about the console, its release date, pricing, and roster of launch games in the coming months.

Posted by Kato-2 - Wed 05 Feb 2020 11:53
Interesting, seems logical given that Thunderbolt/PCIE based USB4 isnt going to be ready in time so this external PCIE format is the next best substitute.

Only one slot though isn't much two would be better.

Kato-2
Also they really should replace the USB ports with type c ones.

Honestly, I don't think should.. it's STILL too early for type-c - especially for a “replacement” as opposed to in addition to. I work at a tech company, avid gamer etc etc. and I STILL haven't seen a single Type-C device out in the wild. Phones being the exception of course… but they come with a cable with a standard connector on the other end.
Posted by [GSV]Trig - Wed 05 Feb 2020 12:31
If you have USB do you really need another storage connector?
Posted by LSG501 - Wed 05 Feb 2020 13:17
I do love how people keep speculating over the sockets when it says in great big letters that this is a prototype and prototypes can change a LOT before actual release.

Hell even MS have come out and said that this image, while real, isn't how it's coming out… although obviously we'll have to wait and see if they're telling the truth about that.
Posted by KultiVator - Wed 05 Feb 2020 15:58

Kato-2
Also they really should replace the USB ports with type c ones.

I work at a tech company, avid gamer etc etc. and I STILL haven't seen a single Type-C device out in the wild. Phones being the exception of course… but they come with a cable with a standard connector on the other end.

External SSDs with USB-C connectors are becoming increasingly popular, as they can then break past the data transfer rate limits of USB 3.0 (Sandisk, Samsung, Lacie, Transcend, Western Digital, Seagate and many others have products in this category).

I'd personally prefer USB-C to proprietary options for fast storage on a console, as there's more scope to shop around for a good deal.