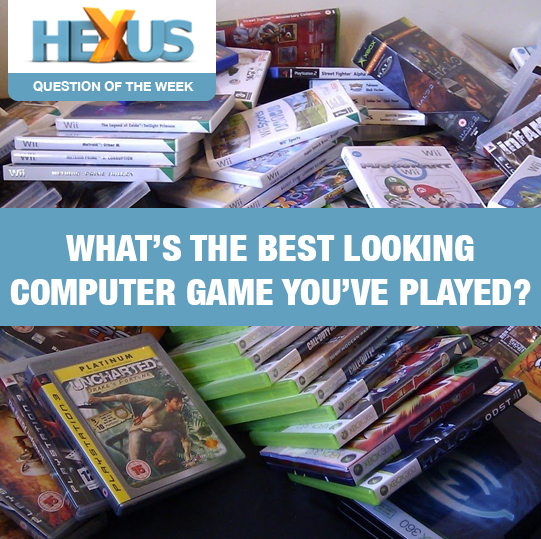 Be it PC or console, nothing quite beats the feeling of loading a game for the first time to see what shiny new hardware can deliver in terms of visuals. Watching graphics evolve over the past few decades has been fascinating, with each new generation of hardware bringing something new to the table, yet the best-looking titles don't necessarily have to strive for photo realism.

I remember being amazed by Gods on Amiga. Donkey Kong Country on Super Nintendo had a similar effect, and I couldn't believe my eyes the first time I played Tomb Raider with a Diamond Monster 3dfx card. Such titles had plenty of wow factor back in the day, and modern titles have raised the bar significantly. Playing Forza Horizon 4 on an ultra-wide 144Hz monitor is tremendous, and I've found Ori and the Blind Forest to be one of the most visually-stunning games I've seen in quite a while.

How about you, which games have had the visuals to truly take your breath away? To find out, we're asking: what's the best-looking computer game you've played? Share your nominations using the comments facility below.

Posted by EvilCycle - Fri 17 Jan 2020 16:38
Overall Red Dead 2 on PC are the best graphics so far IMO, but through the years then I would say the transition from sprites to polygons in general blew me away, the PS1/N64 era was insane with what felt like constant innovations in the majority of game releases… GTA3 had me in awe and then of course Crysis was beautiful in its time too.

because everywhere I look in that game, I can see things that look legit.
Posted by PC-LAD - Fri 17 Jan 2020 16:48
I'm enjoying Battle Front 2 at the moment, I think it's pretty good despite other games on the market. I suppose the fact that it's starwars helps it.
Posted by Zhaoman - Fri 17 Jan 2020 16:49
Halo when it first came out and Ninja Gaiden on the Xbox and Halo 3 was pretty impressive too I thought. The Gran Turismo games on the PlayStation and GTA 3. Half Life 2, Far Cry 2, I also remember being blown away by Oblivion. Crysis obviously but I could barely run it and my friend's PC chugged too so I feel like I didn't get the full experience!