Smart device maker Royole launched the original FlexPai back in November 2018 and we saw it first hand at the CES the following January (2019). This device was heralded as the world's first smartphone with a flexible foldable display. China-base Royale did well to beat heavyweights such as Samsung, Motorola (Lenovo) and LG to release this device.

Nearly two years have passed, so it isn't surprising that Royale has an updated FlexPai smartphone with which to tempt early adopter tech enthusiasts. The FlexPai 2 was launched today, and you can watch the full reveal video here with English dub. Naturally the FlexPai 2 delivers a host of improvements, inside and out. Probably the highlights on the inside are the use of the Qualcomm Snapdragon 865 processor with 8/12GB of RAM and up to 512GB of built-in storage. Outside you have the flexible 7.8-inch display (1,920 x 1,440) third-generation Cicada Wing Fully Flexible Display, which folds to present your choice of 5.5-inch main screen (1,440 x 900), or smaller 5.4-inch screen (1,440 x 810) with the quad camera array and touch pad control by its side. 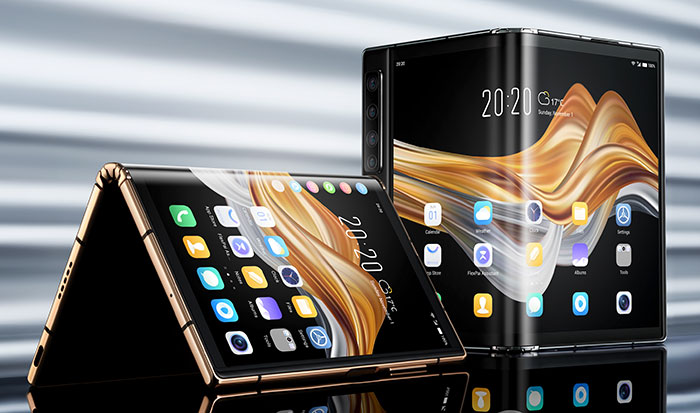 A significant improvement to the folding design is that the device can now fold flat - the predecessor had a wallet-like fold with a gap near the hinge. This change, and other slimming measures, makes the FlexPai 2 40 per cent thinner than the original. Royole rated the folding mechanism and screen of the original FlexPai for 200,000 actuations which seems to be in line with rivals, however the new FlexPai 2 claims an astonishing 1.8m bends durability.

Other key specs for the Royole FlexPai 2 worth mentioning are the improved battery life (4,500mAh battery), USB-C fast charging, 5G dual-mode connectivity, stereo speakers, and updated Water OS software. It measures 6.3mm and 12.8mm thick when opened and closed, respectively, and weighs in at 339g. 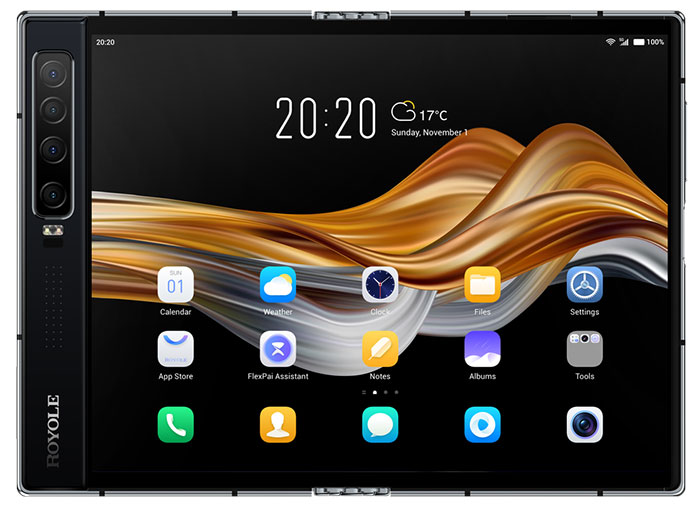 Posted by Orcworm - Tue 22 Sep 2020 20:35
Bit of a strange promotional video, but fair play for bringing something relatively new to the market. Hopefully we'll see the prices come down with later revisions though, £1150 is a bit steep IMO.
Posted by ByteMyAscii - Tue 22 Sep 2020 20:46
Not really a fan of using the curved edge generally for display, as at least for people like me with less than great eyesight, I usually find them really difficult to read.
But as a launcher/app switcher and therefore simpler display with icons it could work.
However I am not sure really what media, or apps are really going to benefit from the larger size screen as least fully utilising the aspect ratio.
Android is notorious for few apps really supporting tablet-like sizes.
Posted by JazzSmoothie - Tue 22 Sep 2020 22:45
It's really cool, and a sign of the direction innovation is going. However it just looks so fragile, my phone is a utility device at the end of the day, and if I had something like that i'd be constantly worried about damaging it. Maybe once the tech gets cheaper it will be less of a worry. Always excited to see new stuff though!
Posted by ByteMyAscii - Wed 23 Sep 2020 01:57

JazzSmoothie
It's really cool, and a sign of the direction innovation is going. However it just looks so fragile, my phone is a utility device at the end of the day, and if I had something like that i'd be constantly worried about damaging it. Maybe once the tech gets cheaper it will be less of a worry. Always excited to see new stuff though!

Products like this are at least driving iteration of the technology. I have little intention currently, mostly due to budget of being an early adopter of pretty much any technology but those people who for whatever reason do spend on these are helping to make them better.
There is an appeal personally to something with a larger screen, which is otherwise unwieldy to have portable. Would let me occasionally view media, and have apps at a much larger size suiting my eyesight better.
So I hope to see this become mainstream in time, and affordable to more of us.

For some people this might be a gimmick, but for me I see real potential.
Posted by Gentle Viking - Wed 23 Sep 2020 09:34
The opening in my underwear are hinged too and actuated, so when the IOT chip detect i need to pee ( as i a too stupid to figure that out myself ) i get a notification on my phone and i can then “unzip” the actuated underwear with voice command once google maps have guided me to a toilet nearby.

What a brave new world it is.