You are here:
Gadgets Accessories News

Fingerbot blasted past its funding goal in just 12 hours to become one of the hottest tech gadgets on Kickstarter. At the time of writing the device is sitting pretty with 27 days to go having already gathered over double its initial funding goal of US$20,000. Fingerbot's success is likely to be in the simplicity of its concept - it provides a remote controlled finger (or robotic actuator) which can switch on/off your non-smart devices in a smart way. It is claimed to be compatible with "all the buttons, switches, and toggles anywhere in your home through voice and app".

The product showcase video above gives a very good rundown about the possibilities that Fingerbot can open up with your dumb-devices around the home.

When you think of all the different kinds of buttons and switches in your home - many are regular switches, while buttons tend to toggle power on and off - they also come in different forms, sizes and shapes. Adaprox, the makers of Fingerbot, have already put thought into this design challenge and you will find that a Fingerbot comes with a varied pack of actuator 'fingers'. One commonly useful one might be the 'sucker' which would work for the traditional light switches in my house, for example. Modern tech gadgets tend to have buttons, which can use the regular actuator you fee in most Fingerbot images. Adaprox provides 3D print templates for you to design and make your own too.

The Fingerbot easily mounts securely to most surfaces using double sided 3M adhesive pads. It connects to smart controls via low power Bluetooth and its rechargeable battery will run for up to six months between charges.

Integration of Fingerbot into your home is very flexible. You can choose to set up command and control multiple individually labelled Fingerbots using the free Adaprox App. Then you can control the Fingerbots by app toggles, schedules and timers - or even via voice assistants like Siri or Google Assistant. 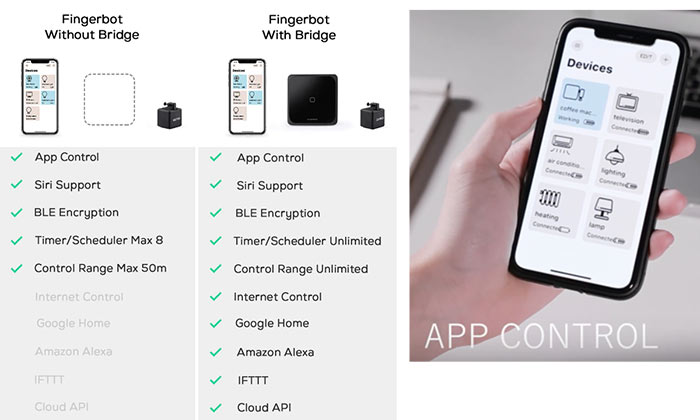 For existing and more complex home setups you can get the optional free Adaprox Bridge Gateway, which brings Fingerbot online, allowing control from anywhere at any time, even when away from the home. Furthermore the bridge allows for fully customised control and routines setup using IFTTT integration.

As mentioned in the intro the Fingerbot is doing very well on Kickstarter. If you are interested in jumping onboard the cheapest entry at the time of writing is US$32 for a single Early Bird Fingerbot. There are a wide range of further options available including a Family kit with 16 Fingerbots, 8 robot arm tool-kits and 4 Adaprox bridges available for $479. Whichever you choose, deliveries of Fingerbots and accessories are expected to be in May 2020.

For things like the light switch I can't help but think it would be cheaper (and nicer to look at) to just buy proper IoT light switches… you can buy an amazon alexa friendly one for around £15, $32 is currently a little over £24 and that's before VAT etc.

You used to be able to get alexa/google now compatible wall sockets for around £25, then throw in alexa's IR blaster box and I'm pretty sure I could come up with a lot better setup for less… which seeing as most things now go onto standby when the plug comes on would deal for most ‘tech’ we own.
Posted by Ttaskmaster - Tue 24 Dec 2019 20:37
Cor, and I was just wondering how I could manage to be even more lazy about my life…

I wonder what apps are available to let me hack my friends' Fingerbotted houses and muck about with their lives!! :D
Posted by chj - Tue 24 Dec 2019 21:31

LSG501
I kind of like the idea but it honestly seems rather expensive for what it is.

Ttaskmaster
Cor, and I was just wondering how I could manage to be even more lazy about my life…

Hah I was thinking the other day I could do with a WiFi socket so I can turn my electric blanket on before I go to bed so it's nice and toasty. Solutions for first world problems.
Posted by LSG501 - Tue 24 Dec 2019 23:58

There are tonnes of options for that, although personally I wouldn't want to do that with an electric blanket (seen too many stories of them becoming a fire) lol. Most are simple sockets that go between the plug and the socket and look neater than the fingerbot thing.