Does your hand get a bit hot and sweaty during PC gaming sessions? Hong Kong outfit Zephyr thinks it has the answer with its high-spec Zephyr Gaming Mouse with built-in fan. The firm's Kickstarter project has been a big success and it is in the final furlong, with 24 hours to go. At the time of writing there are still pledge slots available at the US$79 level with shipping from October this year included. 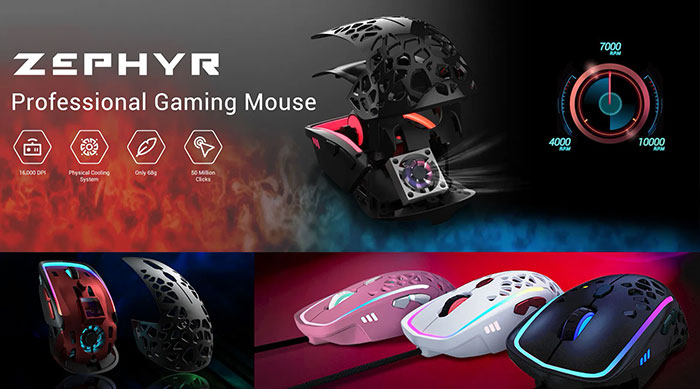 When reading about this 'innovation' I thought HEXUS had reported upon a very similar product before, but I could find no such thing. One can pick though the HEXUS archives and find some influences though. In 2012 we shared a story about the Thermaltake Black Element Gaming Mouse Cyclone Edition with external front-mounted fan. Much more recently Cooler Master introduced the MM710 with honeycomb shell construction, though this wasn't the first perforated light-weight design available. Mixing these together you kind of arrive at the Zephyr gaming mouse.

Sticking to the topic of cooling for now, the Zephyr has a built in RGB fan under the palm area which can be customised to operate from 30 to 60 to 100 per cent speed (or simply turned off). A dedicated button on the mouse toggles between fan speeds. Zephyr says that fan is quiet, even at 10,000RPM, never edging past 30dB. It asserts that even with the fan off the honeycomb design of the shell helps keep your hand cool.

Elsewhere in the design it looks like Zephyr has paid attention to modern gamer demands with the specs of its actively cooled gaming mouse. The 68g rodent features familiar choice components from the likes of Omron and Pixart, has driver-free onboard configuration memory, and RGB LED effects. The key tech specs are outlined in the table below:

As the specs don't mention the button config, it is worth saying that as well as the Omron left/right buttons and the clickable scroll wheel this design features a dedicated DPI toggle button (behind scroll wheel) for switching between 400 to 16,000 dpi (6 steps). There are two buttons positioned on the left side, for the thumbs of right-handers, and the aforementioned button for toggling fan speeds underneath. RGB lighting is controlled by holding down the two man buttons for a period before adjusting settings with the side buttons. 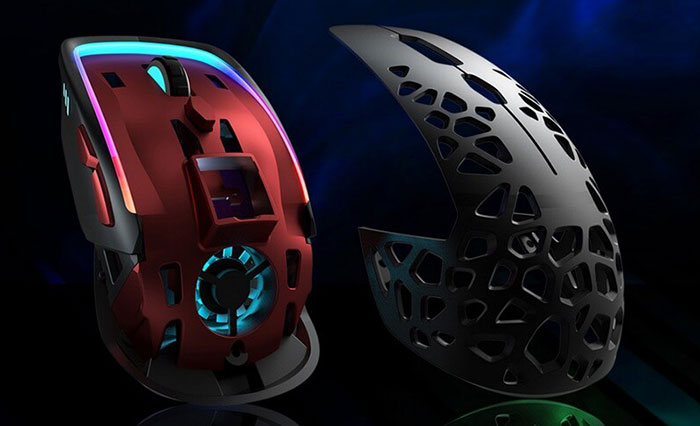 As mentioned in the intro, this Kickstarter project is due to end within a day. There are still chances to buy in to this for a $79 October delivered device. Furthermore, there are a number of reviews available as Zephyr seems to have sent a few samples off to various YouTubers.

Posted by Ttaskmaster - Tue 25 Aug 2020 14:00
Well…. the fan looks quite pretty with that lighting, sort of like Tony Stark's ARC reactor thing….

But it will be noisy.
Moreover, in the case of both cooling and with heating*, IME you'd be better off with an external airflow source blowing over the back of your hands and working its way beneath.

edvinasm
While it does sound ridiculous I must admit I would like to have some sort of heating thingy on the mouse. Myhands are freezing during winter and there's no solution I know of to heat things up a bit :)

And really mouse and not least gaming mouse, there are quite a few boxes you must tick, and then you still have to battle fanboyisem