The PC industry has just been hit by the largest decline in shipments since Q1 2016. In Q1 2020 PC shipments were down 8 per cent YoY. This result goes against the grain somewhat as there has been an increased demand for PCs and laptops as people around the world are being encouraged to work from home (WFH) if an adult or study from home if a student. So what is causing this topsy-turvy phenomenon?

Technology analyst firm Canalys shared a report on the PC industry's fortunes in Q1 2020 just ahead of the weekend. It summed up that even though there is increased demand for PCs worldwide, the constrained supply of Intel processors and the Covid-19 crisis hitting factories earlier in the quarter have worked together to precipitate this steep downturn. 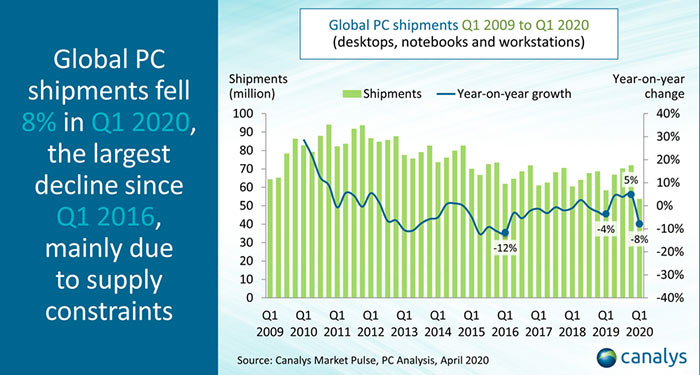 "The PC industry has been boosted by the global COVID-19 lockdown, with products flying off the shelves throughout Q1," said Rushabh Doshi, Research Director at Canalys. "But PC makers started 2020 with a constrained supply of Intel processors, caused by a botched transition to 10nm nodes. This was exacerbated when factories in China were unable to reopen after the Lunar New Year holidays."

Unfortunately for the PC industry it might not have time to catch up in later quarters of the year. Another Canalys analyst, Ishan Dutt, pointed out that while China's production facilities are now getting back up to speed a global recession looks to be in the offing. Dutt predicted that businesses will go bankrupt, with millions newly unemployed as a result and "even governments and large corporations will have to prioritize spending elsewhere". We have already seen businesses going to the wall citing Covid-19, depending on the length of the lockdown(s) surely more will follow, even with government interventions. 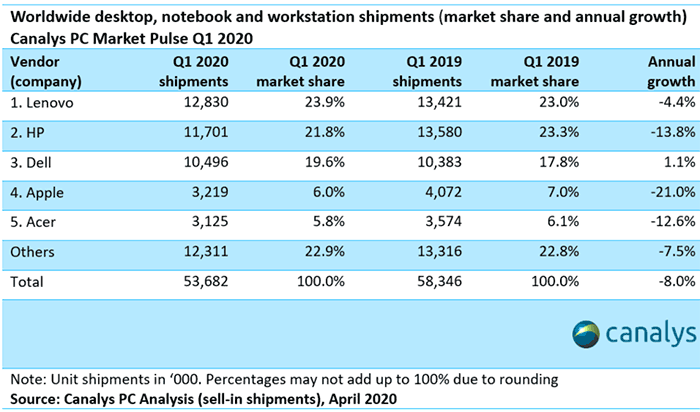 Onto the actual figures compiled by Canalys, Lenovo is still at pole position, even though it saw a 4.4 per cent contraction in business, as second placed HP contracted a hefty 13.8 per cent. Third placed Dell was the only firm in the top five vendors to see positive annual growth (but only 1.1 per cent). Of all the top five vendors Apple has been hardest hit in the last year with a 21 per cent decline in shipments. 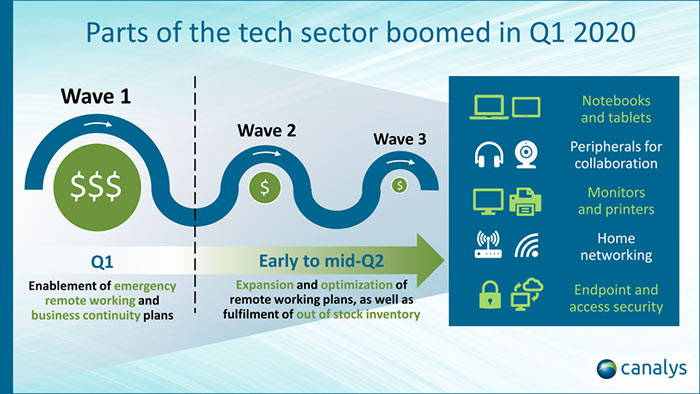 Posted by Tabbykatze - Mon 13 Apr 2020 19:39
“already stressed and struggling supplier was heavily impacted by a rapid short term demand meaning Customers were unable to get their orders fulfilled in a timely manner and distributed tonusers before the quarantine affected the majority of the planets businesses”.

It's a shame but as an IT admin I wouldn't be looking to bring in AMD laptops if the business is heavily invested in Intel. Simply because if the laptop plays up then i can't just pop over to their desk to resolve.

This could have been a phenomenal boon for AMD but the R3K laptops were just so weird and seemed artificially made to fail requirements checks (weird screens, weird IO, odd design choices) and R4K laptops which seem to have all that sorted and performance to boot are too late to the supply chain.
Posted by rave_alan - Tue 14 Apr 2020 23:58
Guess the 3d quarter will be pretty bad.. Everyone, who was waiting to upgrate pc had to do it now because of the home office, after crises everyone including bussineses will try to spare as much as possible and pc is a last thing to buy..