You are here:
Retailers Graphics News

We have published several previous reports covering the rise in demand for graphics cards for cryptocurrency mining and the impact that is having on the industry and consumers. Of course, this heightened demand is good for the companies that make GPUs, they simply can’t make them fast enough, and that has been the case for months. However, the target market for most of the GPUs being gobbled up by the miners is that of PC gamers and enthusiasts, and they would like things to change as many graphics cards are selling for more than double their MSRP. 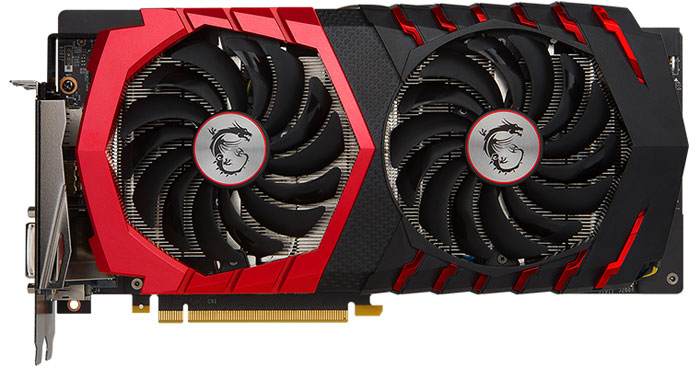 Back in June last year we saw the first Mining Edition graphics cards released by the likes of Asus and MSI. If the idea was to free up gamer targeted GPUs then it hasn’t been seen to work. A brief blip in the main cryptocurrencies value ascent in July gave us some hope but of course that’s ancient history. 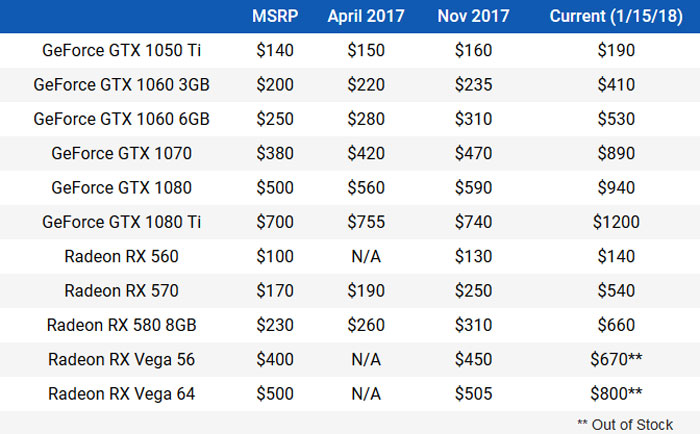 Showing the impact in MSRPs over a wide range of consumer graphics cards, TechSpot put together the table above. The pricing impacts will be similar around the world – in your local currency – with some slight variations. Standout price rises are seen with the GeForce GTX 1060 6GB, GeForce GTX 1060 6GB, Radeon RX 570, and Radeon RX 580 8GB. Furthermore it was noted that Newegg, a major US e-tailer, is doing nothing to discourage miners, selling GTX 1080 cards in six-packs.

UK: At launch many a GTX 1060 could be grabbed for about £230,
the MSI model above was considered pricy with its £300 launch price tag.

German site ComputerBase.de received a statement from Nvidia about the pricing problems for gamers and the state of the market. The statement is reproduced below.

For Nvidia, gamers come first. All activities related to our GeForce product line are targeted at our main audience. To ensure that GeForce gamers continue to have good GeForce graphics card availability in the current situation, we recommend that our trading partners make the appropriate arrangements to meet gamers’ needs as usual.

Nvidia is asking retailers to follow in its footsteps with actions like limiting the number of graphics cards ordered per customer. It will be interesting to see if this ‘directive’ will have any influence on the market. In related news the cryptocurrency miners might, like back in July, again decide GPUs aren’t the best tool for the job depending on other mining solutions and where values settle in the coming weeks and months.

And in other AMD news, the latest Radeon drivers aren't installing on Kaby Lake-G PCs.

Drone range was increased by up to 360 per cent in trials of combo AI routing tech.

DanceswithUnix
So Nvidia's answer is to ask retailers to play nice. Well that's going to work isn't it.

Nvidia: Be nice to gamers

Customer: I want to buy 100 GPUs with minor break pricing

It's like asking a thirsty person to drink less water.
Posted by Friesiansam - Mon 22 Jan 2018 12:57
If Nvidia upped production to meet the demand…

Never know, output keeping up with demand just might help.
Posted by ksdp37 - Mon 22 Jan 2018 13:01
Yeah right Nvidia, not when the retailers can milk the shortage. They don't care who buys it as long at they have the momney in the till.

Now, same card £899 because it's “in stock” whilst several retailers have it on back order for £720.

Easy to say it's for gamers when the retailers are the criminals themselves.
Posted by DanceswithUnix - Mon 22 Jan 2018 13:07

Friesiansam
If Nvidia upped production to meet the demand…

Never know, output keeping up with demand just might help.