Facebook has announced that it is going to start rolling out in-headset ads as part of a tech trial over the coming weeks. The first game/app with the dubious honour of participating in this ad program will be Blaston from Resolution Games – a VR duelling game on the Oculus platform. Another couple of games/apps will join in the trial run in the coming weeks. 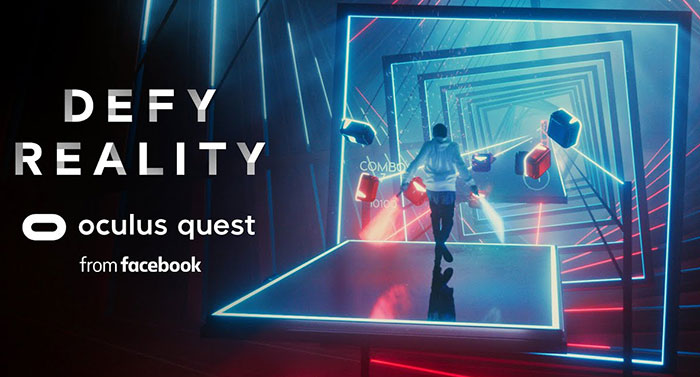 According to Facebook it is working with developers in facilitating these ads to help these third parties raise revenue and create a self-sustaining platform "that can support a variety of business models that unlock new types of content and audiences". Moreover, the ad-model is claimed to help Facebook make its innovative AR and VR hardware more accessible to the masses.

This trial period is important for the future of ads, their scope and nature, on the Oculus platform. The first few ad-enabled games/apps will gather feedback from devs and users and depending on how that goes will have an effect on the ads seen more broadly, before eventual roll out to general users.

One example of an ad in Blaston is provided in Facebook's announcement, as reproduced above. In the duelling arena, you can see an advertising board for a fruit and veg delivery 'business' set up by Facebook for demonstrations such as this. Clicking the ad in the VR experience allows the user to view details of the Jasper's Market offer, save the link for later, and more. For me, the presence of that advertising hoarding isn't detrimental to the Blastron experience, as it stands at this time, mobile games ads I've experienced are often very much worse - what do readers think?

In its blog post about this trial, Facebook asserts that the ads in Oculus Quest titles will follow Facebook's advertising principles, be high quality, and relevant. Obviously this is a sensitive point with Facebook, so it goes into some detail about how it won't use Oculus platform user data – local headset data, movement data, or conversational data (from Messenger, Parties chats, or voice commands, for example) to target ads.

In addition to following the above privacy policies, Quest users will be able to use controls to hide specific ads or hide ads from an advertiser completely, and access their Ad Preferences from the 'Why am I seeing this ad?' interface in the game/app.

Jonj1611
Was only a matter of time

Targetted adverts from Facebook in games can go *bleep* themselves.