Netflix seems to be one of the few big tech companies bucking the trend in trying to create the 'Netflix for games'. The highly successful video streaming service, which has almost become synonymous with film and TV show streaming, would rather concentrate on, and play to its established strengths, said Netflix CEO Reed Hastings at the recent DealBook 2019 event, a conference sponsored by the New York Times. 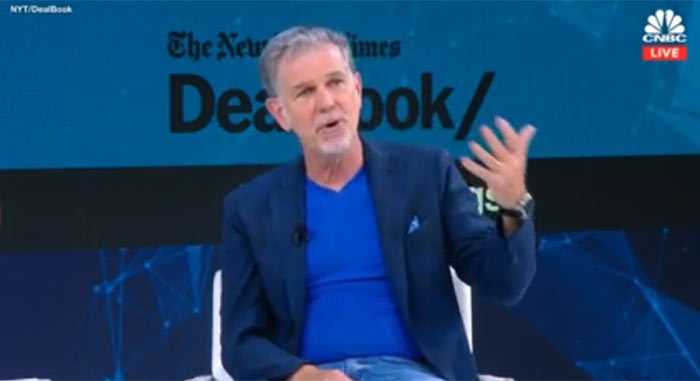 As highlighted ahead of the CEO's appearance on stage at DealBook 2019, Netflix has a growing volume of competitors snapping at its heels. The likes of Apple, Disney and HBO are formidable new entrants to the on-demand streaming business. Thus the NYT wanted to ask the Netflix CEO - 'Can Netflix survive in the new world it created?' - as the streaming wars begin in earnest.

A similar proliferation of serious tech goliaths have recently put more focus on the games streaming market. At the end of the interview, the NYT invited questions from the audience about Netflix's plans, and one attendee asked whether Netflix has thought about going into games streaming. Part of the reasoning behind the question was the idea that Fortnite was taking viewership away from Netflix. Hastings denied any such move would be coming from Netflix, or is at least within its current plans. "We're really focused on doing incredible series and films and unscripted," asserted the Netflix CEO.

Hastings reminded the questioner that "the original quote was that we compete with Fortnite more than we compete with HBO - Fortnite gets a lot more hours of viewing." However, the Netflix CEO thought that moving into the games streaming market doesn't make it a better competitor for viewer time. Rather it will "compete by doing the most amazing TV shows you've ever seen so you put down Fortnite and you come to watch our shows." That's a good attitude, and Netflix does seem to keep the investment pressure on - to fund more and better videos to watch. However it can't be denied that fragmentation of sources and some of these entities becoming competitors (Disney, Fox, etc) isn't great for the Netflix model.

Posted by AGTDenton - Thu 07 Nov 2019 16:18
They need to stop accepting every script under the sun. Quite a lot of poor content on there, latest N Film I watched was The King. Poor choice of actors and a terrible script. The annoying thing is the production quality is quite good. Felt like a draft version of something that could have been exceptional. Though I will admit the main studios are falling into the same bag as well.

They really need to up their game on Films if they want to stand out. I'd rather watch Seagal movies and that's saying something.
Posted by DevDrake - Thu 07 Nov 2019 18:24
Uhh I guess its because it's much harder to find gamers that will accept soft gay porn in every production.
Posted by Goodman2576 - Fri 08 Nov 2019 11:18
@AGTDenton Well THE KING is far from worst movie on Netflix, IMHO it is not a masterpiece, but enjoyable. But I agree that it would be harder for NETFLIX to adapt to different viewer tastes and still maintain high quality. I am eager to see THE WITCHER series and hope that quality will be maintened on high level because it is wonderful story to be told cinematically.
Posted by nobodyspecial - Fri 08 Nov 2019 11:53
It's also not great that every show you do is SJW/diversity/LGBT. That is killing your subs, and cartoons (which I assume you do the same to, if not now then soon) won't save you. I can get old ones all day for free on roku/youtube/etc or small charges on older networks where they are not full of the crap you do today to indoctrinate kids (don't get me started on crazy school crap, 50% failure rates for all students in CA HS's, for $13K a year per kid? FAILURE).

Can't go back now, hoping for more faith or family type networks to pop up or merge into one big new hollywood like netflix is becoming. Cmon trump, get together with all of hollywood conservatives, churches, etc, and start a whole production place up (cleanwood? christianwood?). Produce mostly hallmark type stuff (anime/cartoon or not), tons of christmas/holiday stuff and you'll surely have a HUGE draw from people wanting more little house on the prairie/smallville vs. all the new “MODERN” versions of all the new comic shows, etc. Never mind almost all new content is as previous poster said (DevDrake), basically soft gay porn in every show either out of the gate, or spread through seasons, or after your hooked at S3 etc…Any trick they can try, it's ridiculous. They are doing the same thing to gaming now, so thank god they decided to opt out so far (Beamdog comes to mind).

Take all your modern REMAKES and shove them SJW people. I like Xena, etc just the way they were. I like the Lawyer in Jessica Jones as he was in the comics, a straight man, not lesbian woman on tv. I like that batwoman was a LOVE interest to BATMAN. Not a batchick-dude butch lesbian botanist activist. Great, so lesbian all day, the show hates me basically, & it will tell me I'm destroying the planet every few ep's while telling me how capitalism sucks (which oddly funds all her adventures, but never mind that point) and america has to be fixed, it's evil and everything is the white guy's fault. No thanks, keep all your new IP, altered remakes, etc if this is what you intend to shove down our pipes. We opt OUT.
Posted by slayerr - Fri 29 Nov 2019 15:14
I wasn't aware about this information. Thanks for sharing.