You are here:
Internet Tablets News

Back at the end of September HEXUS reported upon Google's removal of the YouTube streaming capabilities of the Amazon Echo Show smart home device. The withdrawal of service seemed to occur as we first heard news of a Google branded 7-inch Smart Screen device which would go head to head against Amazon's product.

Reasons for the removal of YouTube connectivity were cited by Google as being Amazon's eschewing of YouTube features such as subscriptions, next video recommendations, autoplay, and so on - thereby breaking the YouTube API TOS. The pair of tech titans couldn't agree on how the YouTube app should work on the Amazon Echo Show so it just ended up not working one day.

Now YouTube has returned to the Amazon Echo Show. The way Amazon seems to have implemented the popular video streaming service is by using the same YouTube that runs in web browsers. Previously by default the Show auto-played videos in full screen, annoying Google. To use YouTube in full screen now requires one of two steps. Either you can go over to your Echo Show device and carefully prod the full screen icon ion the corner of the video, or you can simply tell Alexa to do it after playback begins "Alexa, zoom in". 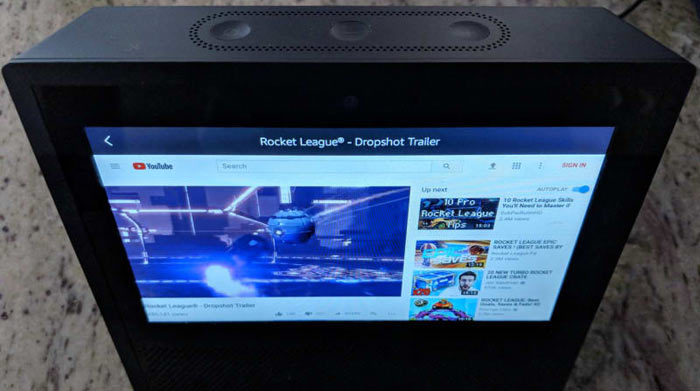 Fast Company reports that this higher-friction way of finding, browsing and maximising videos is "exactly the kind of experience Amazon tried to avoid on the Echo Show". However, the withdrawal of YouTube from its roster of abilities reduced the attractiveness of this smart screen device compared to screenless Echo devices. Google is likely happy that pre-roll ads now work on the Amazon Echo Show, as that was another thing that Amazon's app 'broke'.

For those of us in the UK, the Amazon Echo Show only became available to purchase last week (currently £199). It launched in the US back in May.

Google is likely happy that pre-roll ads now work on the Amazon Echo Show, as that was another thing that Amazon's app ‘broke’.

Call me cynical but I suspect that - as a business that relies on pushing advertising as its main revenue stream - this was precisely why Google didn't like the Amazon device.
Posted by tomthum - Wed 22 Nov 2017 13:28
Google is now a DICTATORSHIP AND A SPYWARE RIDDEN APPLICATION
Posted by peterb - Wed 22 Nov 2017 13:37

tomthum
Google is now a DICTATORSHIP AND A SPYWARE RIDDEN APPLICATION

No, its a business - dictatorships are usually associated with a national state.

And if you dont use any google product or application, ‘it’ cant spy on you. :)
Posted by philehidiot - Wed 22 Nov 2017 13:51
I'm trying to get away from Google products as they've gone too far a few times and their treatment of their staff for “wrongthink” along with their abilities is all getting just a little too Orwellian for me. Especially given it is a private company and therefore is not bound by law to handle that data properly in the same way as a government (there are laws but they're frankly ancient relative to what's happening these days with big data). Why does Facebook practically beg you to share your photos? It wants that juicy metadata - where you've been (geotagging), what make and model of camera you've got or mobile phone so they can work out if it's perhaps coming up to time for a new one and target ads accordingly and then on top of that looking at who else was there by looking at the faces and so on and so forth.

Also, these companies make their profit through advertising so if Amazon wants to remove the adverts from videos, it's basically taking the service without payment. In this case the payment is exposing yourself to a few seconds of annoyance. If you're me, if the advert is too annoying then you add the company to an ever growing list of people I won't buy from. Just because I like to do whatever the system doesn't like me to do.