You are here:
Distribution Retailers News

The expansion of delivery drone use is held back by a number of factors. Perhaps the two biggest blocks to progress and wider adoption of deliver drones are; the limited travel distance of these battery powered devices (which depends on their payloads too), and the regulations that mean they can't fly freely in some areas - some city centres of example. If drone use could be more widespread, they could facilitate faster more efficient eCommerce and even help ease congestion by removing the need for as many delivery trucks and vans on the roads.

Stanford University's SISL labs have been pondering over the drone delivery problem and published a white paper outlining its proposed practical solutions. A talk by SISL researchers on the topic, at the IEEE International Conference on Robotics and Automation (ICRA) 2020 this week, was titled Efficient Large-Scale Multi-Drone Delivery using Transit Networks. 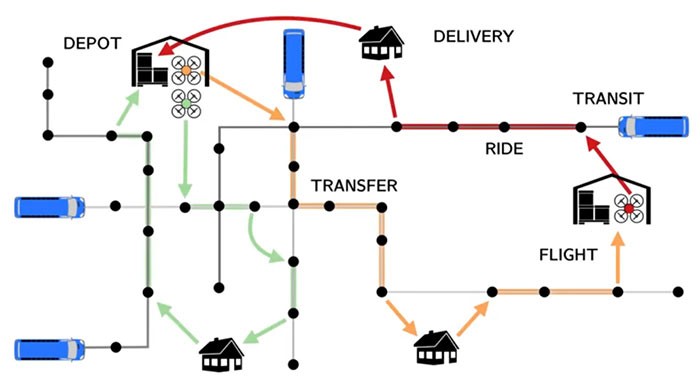 In brief, the researchers sought to control a large fleet of delivery drones operating in a broad urban area. The drones would save energy, and boost their operable range significantly, by hopping on and off public transport networks like busses and trams. Of course this requires a comprehensive algorithmic framework to coordinate everything; delivery routes, with timing, and efficiency concerns.

To build a working algorithm, the researchers took a two layer approach. The first layer "assigns drones to package delivery sequences with a near-optimal polynomial-time task allocation algorithm," and the second "executes the allocation by periodically routing the fleet over the transit network while employing efficient bounded-suboptimal multi-agent pathfinding techniques tailored to our setting". 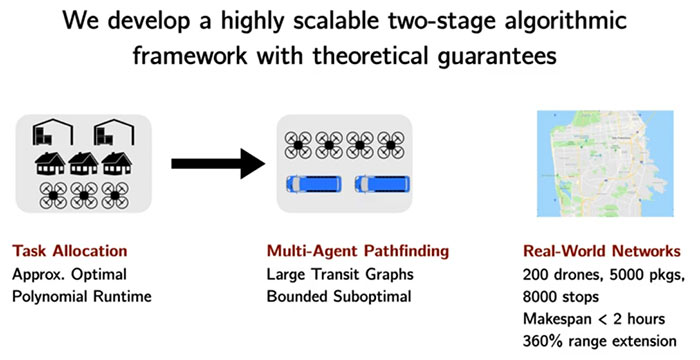 In experiments in the San Francisco and Washington DC areas, SISL researchers worked with 500 drones delivering 5,000 packages and the asset of public transport systems featuring up to 8,000 stops. Commodity hardware fitted to the drones could calculate package delivery routes in just a few seconds. Probably most importantly the drones extended their delivery ranges by between 170 and 360 per cent, thanks to being able to hop on and off public transport.

In the future the SISL research and its scope might expand to include robotic ground transport.

Posted by spacein_vader - Thu 04 Jun 2020 14:14
*checks date*
Posted by kalniel - Thu 04 Jun 2020 15:32
Given humans shouldn't be using public transport at the moment if they can avoid it, this is perfect :p
Posted by 3dcandy - Thu 04 Jun 2020 15:57
Surely a drone to carry humans would be better though lol
Posted by philehidiot - Thu 04 Jun 2020 16:05
Another thing they could do is offer those people with decent sized, relatively secure gardens or flat roofs in strategic areas money (or just discounts at Amazon) to lease part of their garden as a drone holding / charging point. You then have a single van taking a load of parcels to a high volume area and the drones can do multiple deliveries on one charge. The delivery vans often barely travel a mile in several hours because they're doing so many deliveries in a single area. I'd quite happily rent out part of my garden as a drone holding area for a few of them. It would probably increase drone efficiency by taking parcels to the suburbs or small villages outlying cities and letting fully charged and ready drones do multiple deliveries in the same time as one drone flight from base to house and back again.
Posted by Saracen999 - Thu 04 Jun 2020 16:05
What do you do with a drone that won't buy a ticket?

Anyone else amused by the irony of a 21st century drone hopping on the number 22 from Ealing? I think it's delightful.