The publishing of the latest Steam Hardware Survey data marks a bit of a milestone for AMD. The latest data, recorded during September 2020, shows that AMD Ryzen CPUs are winning over gamers with steady gains over recent months. In September AMD left the 25 per cent share milestone behind it with a gain of 0.84 per cent. Please see the screenshot directly below.

Above you can see that back in May Intel lead the CPU market share 77.54 vs 22.45 per cent. Four months later AMD has powered forward to boast possession of 25.75 per cent of the Steam user base. This represents a hearty 3.3 per cent uplift in AMD's CPU share over the period.

AMD's Zen 2 processors have come a long way in closing the single-threaded performance gap with Intel. In modern games, depending upon aspects such as developer and graphics engine, that 1T difference isn't as important as having a bountiful number of threads available. Additionally factors such as pricing and platform longevity will be steering rational purchasers increasingly towards AMD's Ryzen CPUs.

AMD is primed to make further waves in the CPU market as it has scheduled a Zen 3 special event for later this week. The rumour mill points to four high-end AMD Ryzen 5000 series processors forming the foundation of the Zen 3 range. Last week we wrote up a particularly tasty rumour/leak that indicated the AMD Ryzen 9 5900X would be a single thread champ. If Zen 3 lives up to expectations and product is made available in a timely fashion without any price shocks, one must expect AMD's Ryzen CPU winning streak to continue. 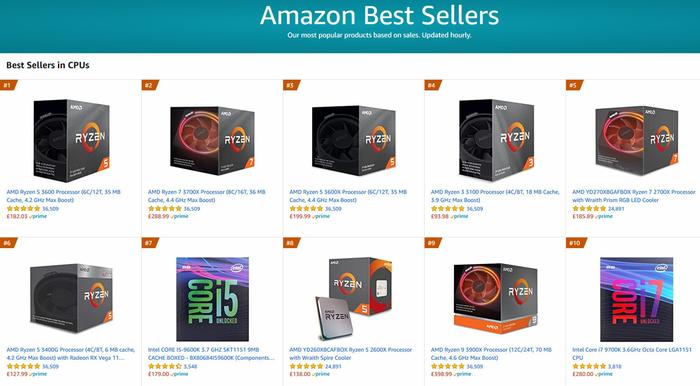 I've just checked Amazon UK CPU sales rankings and you can see above that Intel doesn't make a showing until position 7, with the Core i5-9600K.

Another interesting aspect of the Steam Hardware Survey this month is that there has been so little movement in VR. VR headset demand was very strong ahead of the Half-Life: Alyx launch in March but numbers have disappointed after that. VR HMD unit growth in Steam was just 0.18 per cent in September. Will Microsoft Flight Simulator help? It has reportedly inspired a raft of other PC upgrades, so could be the next 'killer app' for VR. One thing that is certain - VR HMD makers will have to make sure supplies are ready for the next big thing, when it comes.

Not that Steam is a great indicator anyhoo as many play on laptops where AMD isn't strong yet
Posted by huggi - Mon 05 Oct 2020 12:53
Surprising to see how much Intel is still dominating despite all the sales figures showing Ryzen's popularity. I guess this shows how important the pre-built and laptop markets are…
Posted by 3dcandy - Mon 05 Oct 2020 13:06

Steam is in no way shape or form a decent indication of cpu sales etc.

See the post about Amazon sales if you want to see a clearer picture of what is happening. I looked a bit ago and there was not one Intel cpu in the top ten
Posted by DavDarkelf - Mon 05 Oct 2020 13:53

A lot of that is historical data. Given how few people upgrade each year this is actually pretty impressive.
Whilst it might be true for laptop's that is also slowly changing as there are now actually Ryzen laptops.
Posted by QuorTek - Mon 05 Oct 2020 14:55

You don't just build a new PC, my current PC is still Intel, but in the next hype, unless Intel actually comes out with something in the same range as AMD and has to be better… then I would go AMD Inside.