AMD released its latest set of financials yesterday evening after the markets closed in the US. Its headline Q1 2020 financial achievements looked great, with revenue up 40 per cent year-on-year, and a gross margin of 46 per cent. Investors weren't that pleased though, and the share price fell in afterhours trading. Barron's reckons the share price drop was due to the results being in line with expectations but AMD trimming its full year outlook. Pepping up the dry financial release were some interesting morsels of info from AMD, including the assertions that it is "on track to launch next-gen Zen-3 CPUs and RDNA 2 GPUs in late 2020". 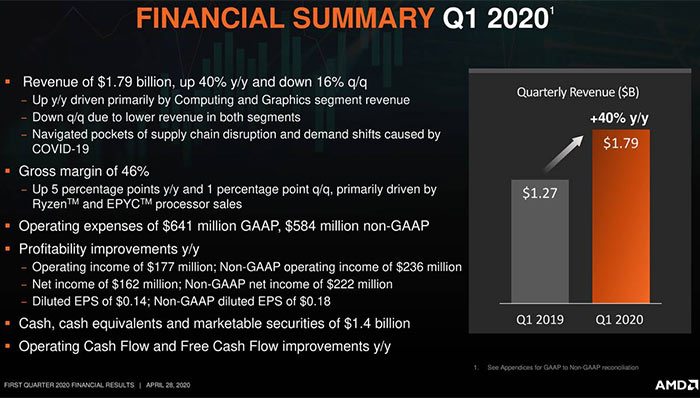 Above you can see AMD's financial summary slide for the most recent quarter. Instrumental to the significant revenue gains was the success of the Computing and Graphics Segment. In further analysis AMD provided figures showing Ryzen and Radeon sales were up 73 per cent YoY. However, the most recent quarter sales were down 13 per cent sequentially mainly due to the GPU side of things. Average Selling Prices (ASPs) were driven up by new Ryzen processors but impacted negatively by increased laptop sales. AMD makes less on laptop processors (selling to those big corporate customers) but is happy to take revenue from them, and says it has over 135 laptop design wins which will be released over the coming months.

As mentioned in the intro, Gross Margin (GM) was 46 per cent, a figure up five per cent YoY and up one per cent QoQ. The GM uplift was largely thanks to Ryzen and Epyc CPU sales. 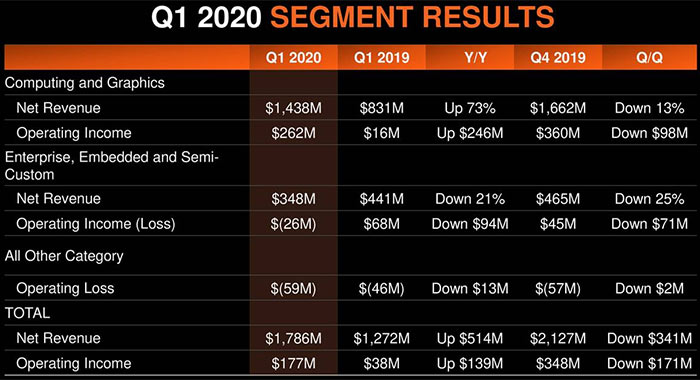 Having just mentioned Epyc, let's have a look at AMD's Enterprise, Embedded and Semi-Custom segment. Overall the picture wasn't rosy with revenue down 21 per cent YoY (and 25 per cent QoQ), primarily due to reduced semi-custom sales. We know this is basically a period of respite as the games console industry changes gears - older console sales are stagnating somewhat but it won't be long until AMD is bolstered by demand for components for the upcoming PS5 / Xbox Series X generation. AMD Epyc sales were a positive though and partially offset the semi-custom slow down.

AMD shared some strategic news with regard to its HPC kit. Server shipments with AMD processors grew by double digits in the most recent quarter. The chip designer was rather proud that its Epyc CPUs and Radeon Instinct GPUs will power the 2 Exaflops+ El Capitan Supercomputer. Furthermore, Microsoft Azure, Google, and IBM all announced new 2nd Gen AMD Epyc processor offerings.

Last but not least, AMD asserts alongside the latest results, that it is "on track to launch next-gen Zen-3 CPUs and RDNA 2 GPUs in late 2020". This will come despite the "challenging environment" and continued uncertainty due to the Covid-19 pandemic. Remember that AMD shares have been effectively marked down due to its cautious statement for the rest of the year. For example, AMD warned that its longer term prospects could be impacted if consumer demand for the Microsoft Xbox Series X and Sony PlayStation 5 was stifled due to the global economic backdrop.

Yeh, no one really knows what to do about forecasting. It's easy enough to do scenarios and plan for each one, but what you forecast is frankly an impossible call.
Posted by Tabbykatze - Wed 29 Apr 2020 11:35
When you have America going “it's no big deal!” then watching their economy slowly start showing signs of breakdown, shareholders believe all businesses should operate like nothing has changed.

“We're scoping a reduction in income due to COVID-19” - AMD

“Nah mate, total BS, you need to be selling more, what does a disease have to do with computers!” - Top 1%
Posted by Iota - Wed 29 Apr 2020 12:01
They have to add a disclaimer though, if they didn't they'd be ripe for law suits from investors. It's a no win scenario, they're performing well but still get hit.
Posted by nobodyspecial - Wed 29 Apr 2020 15:05
Won't be bolstered much by new consoles. Look a the revenue, 348mil for a net loss. You can't make money on these things unless you are selling far more units yearly, or forcing HIGHER MARGIN. They should tell msft/sony to pay $25 more per part (basically get that margin up to 40% or so). If silicon is short ALWAYS make higher margin crap first and only start other stuff on the low end when the high end stays on the shelf. Forget the poor until the rich have had their fill and your bottom line won't keep looking like crap. Revenue up 40%, NET INCOME still rubbishrubbishrubbishrubbishe. Stock is not currently worth $35 (~1B/yr gross, 1/2B net or so, both should be FAR higher for todays stock price). Bad next Q prediction, stock should tank on any bad economic news probably. AMD needs to rethink pricing or continue these crap 100-200mil net income quarters forever. This is not how you beat companies making BILLION NET quarters, or in Intel's case, MANY BILLION's per Q NET. They have a future where they will be worth this (if they charge accordingly at some point), but it is a sell today with this report showing no massive gains in income (which I half expected given selling more servers and expensive stuff now on the shelf). They just keep pricing too many things FAR too low to hit 60% margins they need to in order to compete for real with NV/Intel. NV is buying 7B companies, while Intel forks out 16B for the same. You have been selling everything under the sun that you owned to stay afloat for the last decade, while they are buying billion dollar companies that strengthen their products going forward. Charge more, or this just gets worse again. You made a nice run, but so far have failed to PRICE RIGHT for profit forcing everyone to mark 1/2 off etc at launch killing your net income. FOOLS. Stop being our buddy and start making money.