AMD has emailed HEXUS to share some stats it would like to highlight from a recent report by Mercury Research. As well as figures showing the quarter-on-quarter and year-on-year progress of various segments, AMD has provided some supplemental juicy details about its progress in other ways, such as laptop design wins.

In the above chart you can see AMD processor shipments share by segment. This charts the volume of products shipped not the revenue/value of the sales. As you can see AMD's Q4 2019 market share is rather modest, especially in the lucrative server market it is trying very hard to crack. However, there are a couple of things to note; firstly the server market moves more slowly than desktop/mobile etc, and secondly most of these results are the best for AMD since back in 2013.

None of the figures are surprising in any way, otherwise we would have seen some market reaction. Perhaps this release was provided in part for edgy investors who saw AMD's financial release last week and complained about the firm' not providing specific numbers for chip sales (while rivals Nvidia and Intel do). 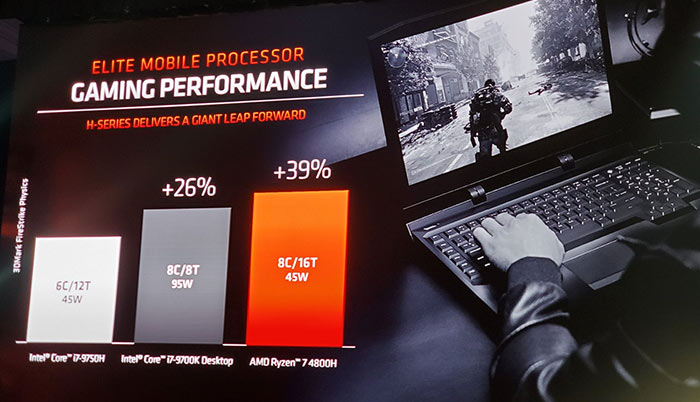 Going forward, AMD should see stronger Mobile market sales thanks to its success with laptop OEMs in recent months. In the email AMD noted that "AMD-powered laptops from major OEMs increased by 50 per cent in 2019". Desktop and Server markets have also recently received compelling new products from AMD which it is hoped will add momentum to the figures we see charted.

In server, AMD's comparatively weakest segment, there is great hope as 2nd generation Epyc processors ramped up significantly faster than the 2st gen "thanks to performance and TCO advantages over the competition". Analyst Patrick Moorhead noted that the Server numbers aren't to be dismissed, and said it showed "good progress," particularly as AMD server market share came from a standing start at near zero per cent before Epyc arrived.

Posted by KultiVator - Thu 06 Feb 2020 15:06
Amazing that AMD have as much as 16.2% in mobile given the relative weakness of the current crop of Zen+ mobile CPUs they've been shipping up to this point.

However, that's all set to change this spring/summer with the meaty Zen2 Ryzens landing in laptops for the first time. The figures for Ryzen-powered mobile devices should then see something of an explosion going forwards.