A very interesting and perhaps controversial new report has been published over at HardOCP, penned by their editor in chief Kyle Bennett. The story concerns Bennett's investigations into the new Nvidia GeForce Partner Program (GPP) and its ramifications for the industry, and ultimately, for consumers. After some digging though the Nvidia GPP T&Cs and talking to various AIBs and OEMs, Bennett suggests that Nvidia is seeking to benefit from its almost-monopoly position in gaming graphics and to effectively force AIBs to choose between being a close partner with Nvidia, or facing various less favourable trading circumstances outside the partnership. 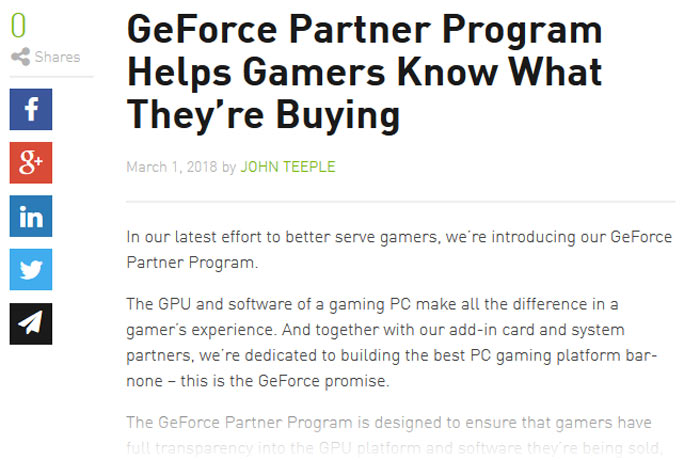 On the surface the Nvidia GPP sounds like a positive thing. Nvidia says that it has been formulated "to better serve gamers". Nvidia talks a lot about branding and how the program is open and free for anyone to join, furthermore it is said to be transparent and non-exclusive. However, HardOCP discovered that AIBs and OEMs were strangely reluctant to talk about GPP.

Digging further and talking to seven companies about the new Nvidia GPP, Bennett found some likely thorny issues with it. One main condition of being in the Nvidia GPP is that the partner company has to have its "Gaming Brand Aligned Exclusively With GeForce." Without confirming that Asus ROG is one of the worried AIBs, it is a good example of a big AIB and OEM which currently offers both Nvidia and AMD GPU based graphics cards and systems.

Most importantly if you do not align your company and sign up to be an Nvidia GPP you will miss out on the following exclusive benefits:

HardOCP's editor reckons the last bullet point is a very important consideration for AIBs and OEMs. However, most of these benefits, should they be withdrawn from a partner, look like they could have financially painful consequences. 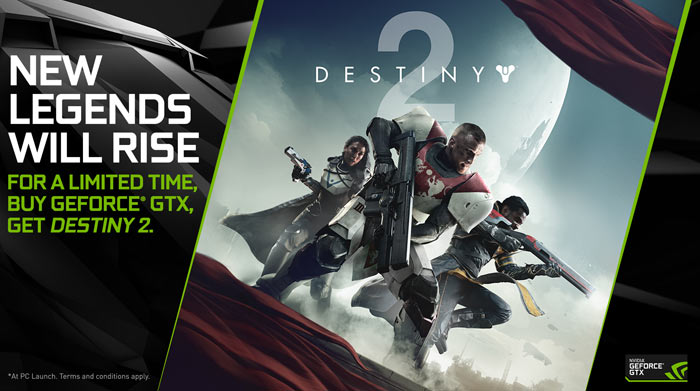 Holding back inventory for NPP members?

Another disturbing consequence that AIBs or OEMs could face, outside of the NPP, is that "Nvidia would hold back allocation of GPUs from their inventories". HardOCP didn't find this condition or consequence officially in any Nvidia T&Cs or similar documents but it reports that several potential partners indicated that this would be the case - signalled to them by Nvidia via a "wink and a nod".

Giving context to this story, the Nvidia GPP is likened to Intel's inglorious historical practices which ended with the firm facing multi-million dollar anti-competitive fines - though it dominates the PC CPU industry and such amounts could be seen as collateral damage to achieve htat dominance.

The concerns of the HardOCP editor over GPP, and a request for its signed-up partner list, were sent to Nvidia on 22nd Feb 2018 but any response is yet to arrive. Hopefully some of the concerns can be answered and even rebuffed clearly by Nvidia in the coming days. I think it will really have to say and do something, as some of the concerns could be of interest to bodies such as the Federal Trade Commission in the US, or the EU Competition Authority over this side of the pond.

Posted by CAT-THE-FIFTH - Fri 09 Mar 2018 14:14
Well its more “gaming branded” devices than anything else - so what I gather is that you can offer AMD cards but in products not advertised towards gamers. Even people like Linus have mentioned gaming branding does mean you can charge a higher average selling price for the same parts.

What worries me though - is this just AMD graphics cards?? Would this all prevent AMD Ryzen based laptops using an IGP or even a Nvidia card from being advertised under gaming branding??
Posted by spacein_vader - Fri 09 Mar 2018 14:17
Good to see Hexus isn't afraid of ending up on Nvidias naughty list.
Posted by kalniel - Fri 09 Mar 2018 14:24

hexus
to effectively force AIBs to choose between being a close partner with Nvidia, or facing various less favourable trading circumstances outside the partnership.

Surely it's the brand, not the being a partner? Ie the partner can be close to nVidia or AMD no problem, but the brand for nVidia has to be different. Ie Zotac vs Sapphire brands for the same AIB partner.
Posted by CAT-THE-FIFTH - Fri 09 Mar 2018 14:35

kalniel
Surely it's the brand, not the being a partner? Ie the partner can be close to nVidia or AMD no problem, but the brand for nVidia has to be different. Ie Zotac vs Sapphire brands for the same AIB partner.

The crux of the issue with NVIDIA GPP comes down to a single requirement in order to be part of GPP. In order to have access to the GPP program, its partners must have its “Gaming Brand Aligned Exclusively With GeForce.” I have read documents with this requirement spelled out on it.

What is disturbing is that we have been told that if a company does not participate in GPP, those companies feel as if NVIDIA would hold back allocation of GPUs from their inventories. From all we have talked to, the issue of not allocating GPU inventories to non-GPP partners have not been spelled out contractually, but is rather done on a wink and a nod.

Basically,the crux of the matter,is HardOCP is saying ANY gaming related brand has to only use Nvidia - OEMs can equip non gaming branded devices with AMD cards,ie,those which are not targetted towards gamers.

There is also no clarification if this also covers systems with AMD CPUs too,so will Nvidia endorse gaming systems using an AMD card,or will they be debranded??

Now,it also has another bigger issue - DIY graphics cards which we buy.

Or will it mean AMD powered cards get less access to the better cooling,features,etc of the gaming branded devices,ie,more basic reference ones??
Posted by mercyground - Fri 09 Mar 2018 14:48
Going to be fun to see the popcorn from this one. Intel got slapped by the FTC over very similar stuff.
I'm not surprised that NV is pulling this sort of lowdown stunt and threatening people by pulling preference/stock from those that dont play ball. They did it with AGEIA cards (physics was moved to gpus only and disabled if ATI/AMD cards were in the system). It was proved that it was purely a driver block as beta drivers worked fine with amd cards as primary and a 2ndary nv card for physx.
They've done it for “game optimising” apis which were also proved to “knobble” codepaths on competing cards. (this is really one that takes the cake given they begged MS to cut DX10 standards as NV cards could not do the original DX10 standards and resulted in the farce that was DX10 and then the later revisions to the standard)
Its just another bulling and anti-consumer push from NV. Forcing your partners to ONLY sell NV “gaming” cards and either pushing them to NOT sell AMD cards or sell as “unbranded” or differentiated cards is deliberate manipulation of the market.

Its just another in a long line of abuses that NV has pulled and will continue to pull.

:edit: and i do wonder if its partially aimed at Intel/AMD doing Apples new chips for macbooks (intel cpu with onboard amd gpu) It makes me laugh given that Nv pissed Apple off over bumpgate that apple posted a famous tech doc basically stating that Nv lied and failing macbooks were down to faulty Nv gpus.